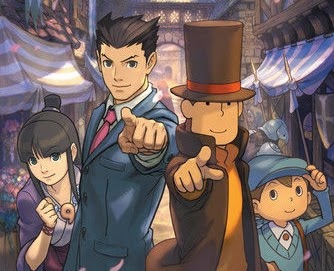 I love good choc mint gelato. Not the nonsense stuff that comes out of packets, but real gelato, made by humans and not machines, and fresh. There’s nothing quite like a nice gelato to cleanse the palette after a good meal, or as a way to unwind after going to the movies or theatre.

But I have never, in my entire life, had fried chicken in one hand, gelato in the other, and thought it would be a good idea to mix the two.

See where I’m going with this review of Professor Layton Vs. Phoenix Wright: Ace Attorney? Think of Layton as the fried chicken and Ace Attorney as the choc mint gelato; separately they’re truly wonderful, but meshed together as inelegantly as this and you’re left together with a mess of a game that fails to do either franchise any kind of justice. 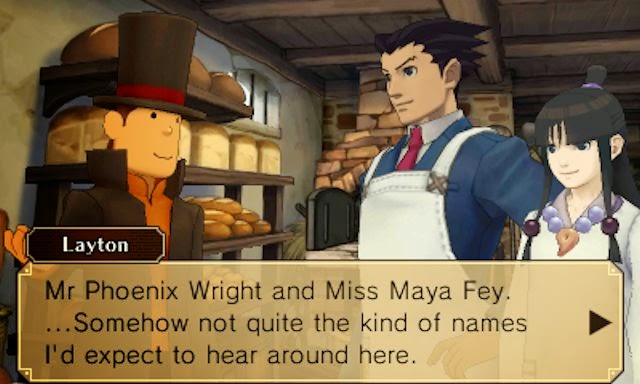 At the most basic level there has been so little done to genuinely integrate the two franchises that it feels like what you’re getting is a short version of each game that just happens to share a common plot line. It’s a generally interesting narrative, filled with the usual mystery twists and turns and mysticism that runs through both Capcom and Level-5’s franchises. Taken in isolation the narrative would have worked well in a complete Professor Layton game or a complete Phoenix Wright game, and credit must be given to the game’s writer, Shu Takumi, who comes from the Ace Attorney side of the partnership. His understanding of Wright’s character is naturally spot-on, but he’s also done a good job in representing the wholesome Sherlock Holmes-style Layton. It’s never easy to step into a project as a writer and understand to such a degree what makes a long-beloved character tick, and Takumi’s characterisation of Layton shows complete respect and expertise for what made him such a likeable character in the first place.

The narrative itself is heavily based on mysticism, and this provides a thematic happy hunting ground for logical thinkers such as Layton and Wright to be challenged by things well outside their experience and comfort zone. That conflict between magic and conflict is an age-old but effective way to build narrative tension and a sense of danger and the unknown. There’s no real danger to the characters, of course – the worst that can happen is a “game over” screen and an immediate restart, but the atmosphere is there, and it’s a story of order and logical thought against pure chaos that always makes for a compelling narrative trip.

But as strong as the setup is, once the the actual game starts it starts to lose its drive and is replaced instead by a confusing mess of two great games that are just not compatible. It’s a disjointed experience where you’ll be pulled from the kind of puzzle-book logic mind games of Layton into the kind of investigative logic that drives the Ace Attorney games. While both are nominally puzzle game experiences, they each require different thought processes, and the lack of consistency in the kind of thinking that the game demands is a jarring experience that I never quite resolved while playing. One minute I’ll be happily figuring our sliding block puzzles, and then the next I’ll be filtering through clues in order to yell “Objection” when I find a discrepancy. Both are perfectly enjoyable ways to pass the time individually, but together… it’s fried chicken and choc mint gelato. 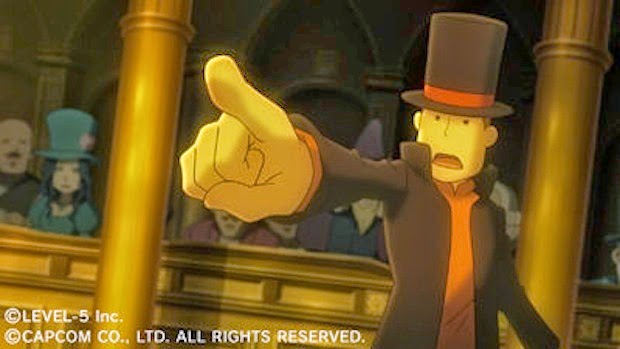 The first couple of hours of the game stand out as being truly terrible, as players quite literally play through a dedicated section of “Layton” gameplay, and then a dedicated section of “Phoenix Wright” gameplay. I very nearly put the game down then and there and moved on, since, plot aside, there was nothing that linked the games in any meaningful manner and that is quite simply not what I had signed up for. Then Layton and Wright met up and the narrative started to progress in a more singular manner, but for all the good that the narrative does I never felt that the developer had any idea on how to properly integrate the two styles of play. So instead we had sections where there was a hamfisted solution; Layton tries cases, and Wright solves puzzles. It’s clunky and awkward, and feels more like a concession that the developer has no idea how to properly integrate the two disparate kinds of gameplay into one where both Layton and Wright can seamlessly transition between.

It’s not that the game fails to offer something compelling; I sit there and take any individual piece of what went on in Professor Layton Vs. Phoenix Wright, and I liked it. It’s just that the attempt to mesh two very different kinds of games together without any real attempt to adjust how either plays simply doesn’t work as well as it should on paper.

So, again; fried chicken is awesome. Choc mint gelato is delicious. Combining the two is not the great experience that does justice to either flavour.