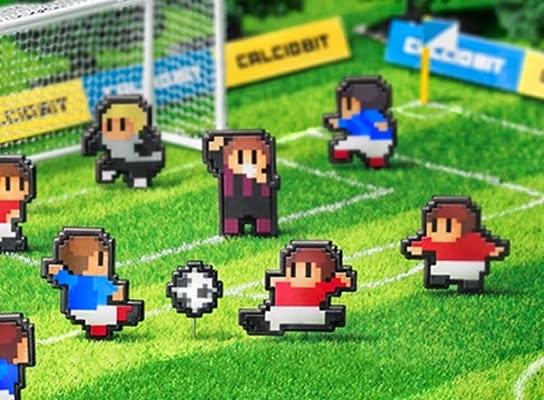 Why can’t more games be this much fun? Nintendo Pocket Football Club has absolutely no pretensions about what it is; it’s a casual and lighthearted football management sim that aims to replace the sheer depth of other, more serious, football manager games. It seeks to do this by using the most incredibly charming presentation imaginable, while providing players with a simple, easy-to-understand interface to ensure that no one is confused by it.

It succeeds in its goal admirably. This is a game that is instantly accessible even for people who have never played a football management game before. With the likes of Football Manager, the complexity of data is nearly overwhelming; each individual player has 30 or more statistics to keep an eye on, and then the game presents those statistics as a dry spreadsheet. In Nintendo Pocket Football Club these statistics and filtered down to a mere handful, and rather than attach an abstract numerical score attached to each statistic (forcing players to wade through statistic after statistic to understand how a player compares to other players), in Nintendo’s take on the management sim each player’s skills is represented on a “S-A-B-C-D-E” scale, so players know at a glance which character is to be feared, and which is a literal “fail.” 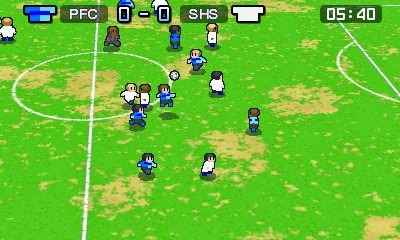 Building and managing a team is very straightforward. Players have a set budget each year, and that budget is used to “purchase” players. There’s no negotiating with agents and other teams to secure contracts, as you’d do in the more serious management sims. Training the team once it’s filled out is nice and easy too. A typical football management game would ask the player to create a training schedule for the team that develops all the necessary skills in soccer, but in this game, players each “cards” in matches which are then spent to directly level up a character’s statistics. Again, it’s an instantly easy way to understand what effect that each of your decisions will have on the team.

The complexities of the management sim have been simmered down to their basics on the play field too. Players can adjust the formation of the players, set basic strategies (“Attack”, “Defend”), and control when players come off the bench, and that’s it. There’s no need to set detailed strategies from a half dozen menus, or adjust these strategies on the fly to account for different weather conditions, or a change in the opponent’s own strategy; Nintendo Pocket Football Club will give you enough control over the basics to make you feel like you’re a part of the action, without potentially confusing anyone with an overload of potential strategic options that would mean the difference between victory and defeat.

As with most football management sims, players have no direct control over what happens on the field. The game will force you to watch each and every match, and this means a lot of sitting back and simply watching the game play on auto-pilot. With most football management sims, this is an acquired taste; after all, who wants to watch a soccer game when they can play one? But Nintendo Pocket Football Club has an ace up its sleeve; it has the most adorably cute little football players running around the most charming soccer fields ever designed. As players, these adorable little sprites are a little stupid, and it’s frustrating seeing them miss obvious opportunities to kick at goal or letting through silly goals. But as frustrating as it is that you can’t physically tell the players what to do, the point of the game is that the developer of the game wants you, the player, to become attached to the fortune of your team. By watching each and every victory and loss it is indeed hard to resist becoming invested in what’s going on on the field. And so, even though you’re not doing much when a match is playing out, it’s still an intense and even stressful experience. Case in point; I actually needed to put my 3DS down and walk away at one point because my team was in a critical match in determining who would win the competition, and with 70:00 minutes on the clock I was 2-1 up. I had the team strategy to “defend,” which all but guaranteed that my team wouldn’t score a goal and instead focus on keeping the opponents from scoring an equaliser, but with my players tiring, and no substitutions left to make, my hands were sweating. A competition can take a half dozen hours or more to work through, so there was a lot of invested hours of my life at stake in the last 20 minutes of virtual time.

The game features four levels of competition to work though. Players start at the lowest competition, but winding up a season at the top of the table will promote the team to the next league, conversely coming in the bottom will relegate them down a competition level. The performance of the team affect you, as manager, in that it will lift or lower your approval rating, represented as a percentage score. The only way to lose the game is for the approval rating to drop below 3 per cent, and it does take a long string of failures to get it that low. With that said this isn’t a pushover of a game. Being promoted to a new league is a real struggle; the increased budget that comes with a promotion allows you to “buy” better players, but that doesn’t work especially well at first until the team can start to find some cohesion. Meanwhile, your existing players are statistically outgunned by their rivals upon entering a higher league. More than once my team was in real danger of being relegated the first season after being promoted, and it would take me multiple seasons to be in a position to be promoted out of an existing competition.

As charming and entertaining as Nintendo Pocket Football Club is, it must be said that after first first couple of dozen hours of play I started to become frustrated that I couldn’t have more granular control of my team. Simplicity is fine, but it also means the game has limits; players don’t suffer from form slumps, prolonged injuries, or international team responsibilities, meaning that there’s not much need to change the team around from one match to the next. Occasionally a player will become tired or have a match suspension via a red card, but a handful of reserves is enough to deal with this issue. In other football management sims I rather enjoyed the fact I needed to balance a reserves side as well, to ensure that I could fill the gaps in my main team that often cropped up. 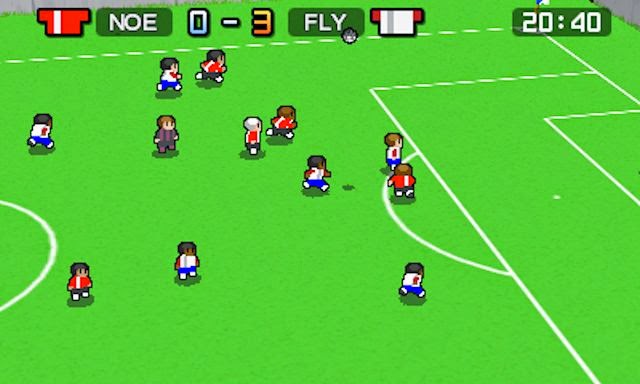 In addition, because there’s not much strategic control over the team in a match, match outcomes become a little too predictable; it’s a simple matter of “he who has best statistics is more likely to win,” which is fine, but to again compare to the more serious football management sims, there was a heck of a feeling to being able to shut down a statistically superior team by issuing smart tactical changes throughout the course of a match.

Obviously this game doesn’t feature licensed teams, and Football Manager fans typically want licensed teams in their sports sims. On the other hand, the game allows players to name their own players, and this fits in neatly with the theme of “let’s make players care about their teams.” This also means that, if you do want to recreate your favourite real-world team, then you can still effectively manage Real Madrid, or Crystal Palace, or whatever other great team you follow.

Outside of the massive single player game, that will take dozens of hours for the typical player to work all the way up to become the champion of the highest league, Nintendo Pocket Football Club has an extensive online system. Players can challenge other clubs and work their way up rankings tables for both their region and their local country. It’s asynchronous; players simply upload their team, and then other teams challenge that most recent data, rather than both players needing to be online at the same time, so there’s an additional thrill to logging in each day to see how the team has fared against challenges that others had issued it since you were last online. Nintendo has even set up a website that provides players with all their results and team information when they’re away from their consoles. Here’s my team; it’s doing pretty well for itself! 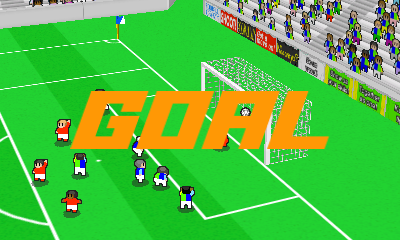 When the goal is to take a wonderful, but complex, genre and simplify it so it becomes more accessible to more people, the results can go one of two ways. On the one hand it can reduce a wonderful game down to something lesser and generally not worth playing, or alternatively the new game can develop its own identity and successfully appeal to purists and more casual fans alike. Nintendo Pocket Football Club is the latter. It’s certainly casual compared to the Football Manager games, but thanks to its adorable presentation and its ability to make you truly care about the fortunes of your little soccer players and team, this is the equivalent of a pulp fiction page turner; it’s not necessarily fulfilling, but it’s truly entertaining and impossible to put down.