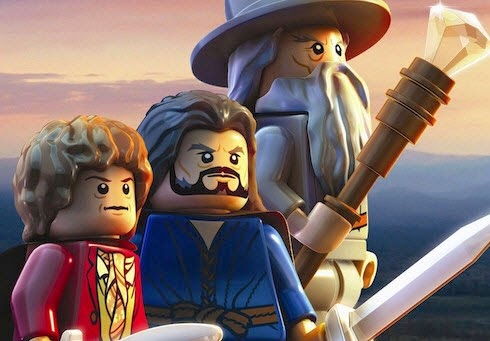 LEGO The Hobbit ticks all of the boxes I have come to expect from the LEGO titles by TT Games. There are recognisable places and faces from an existing property, lots of jumping and button mashing action, plenty of puzzles and a great deal of humour all wrapped up in a blocky package straight from my childhood. LEGO The Hobbit does all of these things very well, and while there are very few genuine surprises along the way, there are enough small twists to make this edition of the game fun if not spectacular.

The first thing that stood out to me is that this game is combining the stories from both films An Unexpected Journey as well as the more recent Desolation of Smaug. The game itself does not take a long time to get through – about seven hours or so. In theory, you could probably watch both movies in roughly the same length of time.

Perhaps I am slightly biased because of the movies, but I felt as though the game was stronger during the latter portions of the adventure – just as I believe Desolation of Smaug was far better than An Unexpected Journey. Of course this is not even close to a line-by-line retelling of the movie as TT Games has put its usual brand of humour to good use here throughout the proceedings. Bilbo making a paper air plane that catches fire in the title screen? Check. Hobbits armed with frying pan (I never understood why this became a running joke in the Lord of the Rings franchise. Hobbits use frying pans because they’re less concerned about their safety than other species using real weapons? Why? – ed)? Check and check.

For movies with such serious tones throughout them, there is still a great deal of humour to be mined in them nonetheless, and to that end LEGO The Hobbit delivers. The presentation is excellent, with environments that show plenty of detail and movement, and the characters that all have distinctive appearances. That said more variety would have been nice. Many of the characters feel very similar to one another in action, something that was not as common in LEGO Marvel Super Heroes where different costumes and power variety made them feel distinctive from one another. 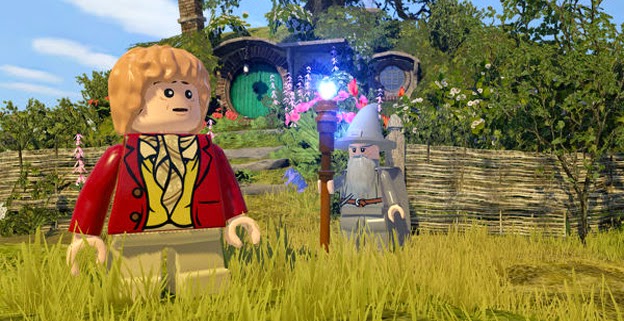 While the jumping and smashing formula might be getting a little long in the tooth, the core gameplay is still a lot of fun. Using new characters and trying to figure out how to solve puzzles using their unique skill sets is as rewarding as ever as the various studs fill up your money counter. If this was just an old dog with no new tricks, I would have been disappointed no matter how much I adore the source material. Thankfully TT Games has included a couple of new twists worth mentioning.

The crafting system in LEGO The Hobbit seems like such a natural inclusion that I cannot imagine how it was not a part of the LEGO series since day one. Collect different kinds of bricks and objects and reach work stations where you can craft the necessary key or item to further advance. It was somewhat confusing at first how it worked in practice, but the tutorial blocks scattered all around the game help teach players how to get things done.

There are timing based mini-games scattered throughout the adventure as well. They might be as simple as mining spots of ore along the way or participating in a plate shuffling game while visiting Bilbo’s home. 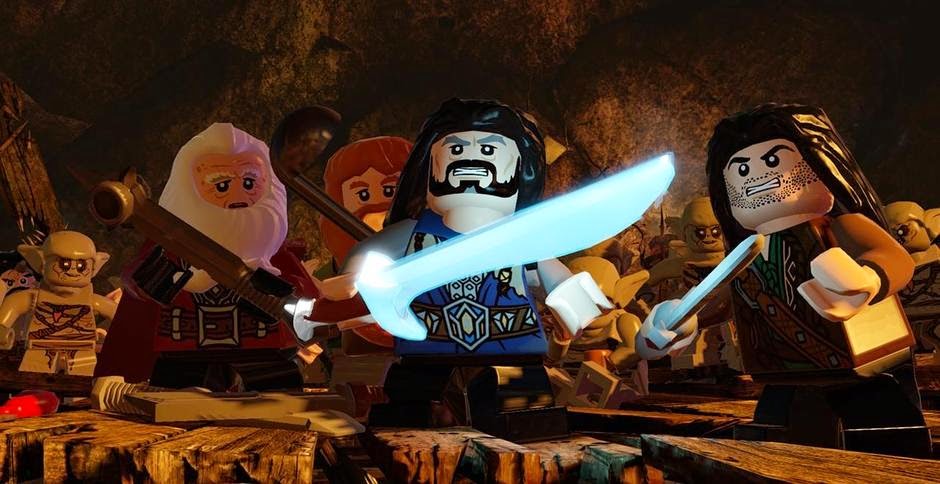 The way the story is told also feels a bit different this time as well. The basic structure is still lots of missions tied together with a free roaming hub, not unlike LEGO Marvel Super Heroes. However, not every level is riddled with mindless enemies to thump. The aforementioned visit to Bilbo’s home is a spectacular example. Here you play out the scene where the dwarves come to call on the ‘burglar’ and mayhem ensues. There is not a single enemy to fight in this scene, but the puzzles, funny cut scenes and mini-games keep things fresh throughout. Both of my daughters were greatly amused just watching it unfold. Certainly there were things to destroy. I could not bring myself to do it as Bilbo, but taking over one of the many dwarves and shooting and smashing up the place felt like good fun.

If you are just looking to blast through the story as quickly as possible, you can wrap up LEGO The Hobbit fairly quickly. If you are willing to explore all of the various nooks and crannies throughout each level, unlock characters and simply explore – your journey could easily add over a dozen hours to it. I feel as though this sense of exploration and discovery is at the very heart of The Hobbit itself, and it blends well with the almost unlimited possibilities that LEGOs can provide.

You can debate whether the formula is old or simply tried and true, but for me it was a great way to spend some time with one of my favourite stories.

Magic 2015: Duels of the Planeswalkers is predictably announced… with a nasty surprise

Looking for some iOS or Vita gaming on the cheap? Game Atelier has you covered!