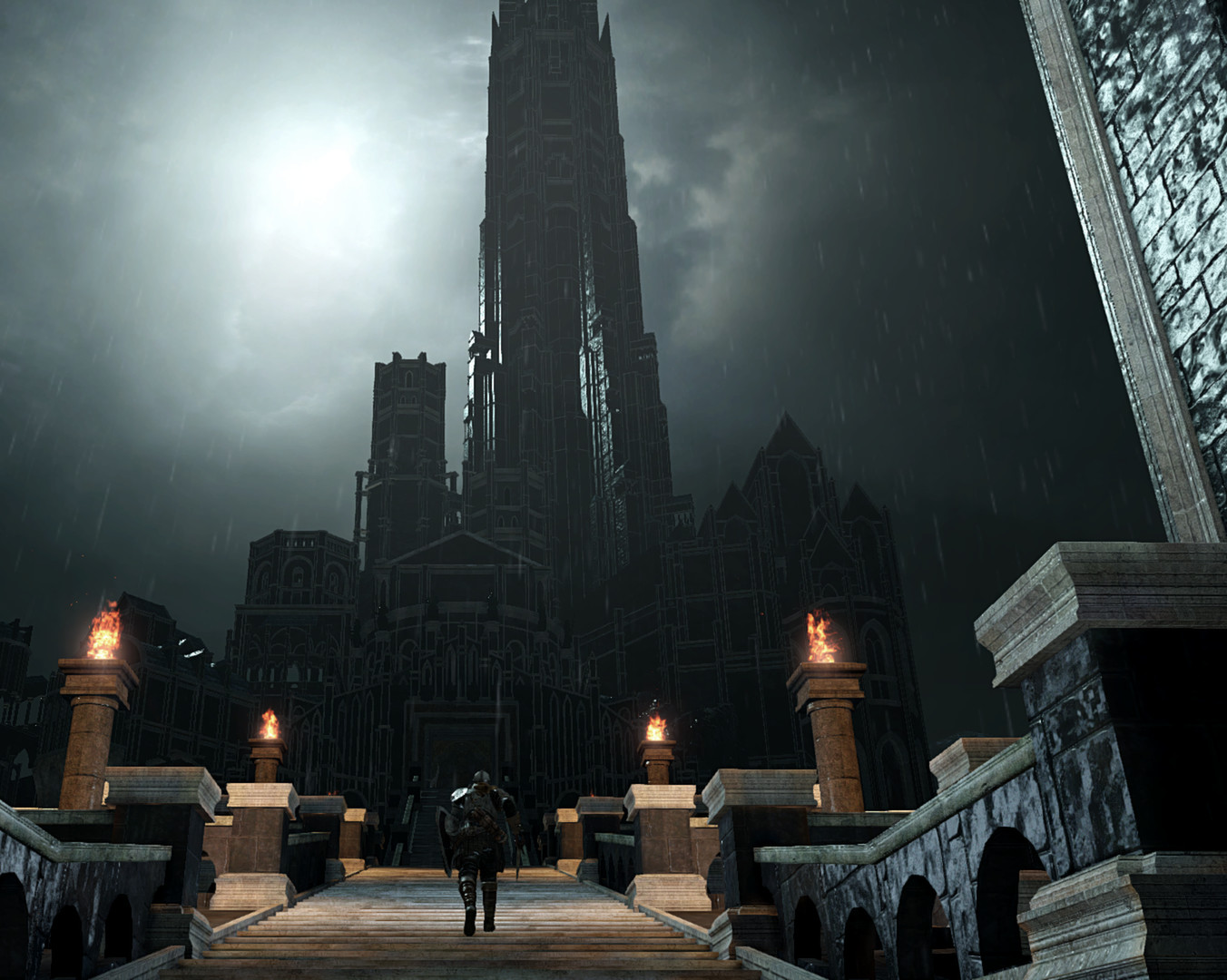 Part of what makes Dark Souls 2 so fascinating is that it is a formal sequel for the first time (Demon’s Souls and Dark Souls being informal sequels). Games need to evolve and change, or they risk becoming cookie cutter rehashes like we’ve seen happen to the Call of Duty series (and Battlefield, and Assassin’s Creed, and…. ed). At the same time, every time a developer tweaks a popular game’s original formula, it risks alienating and angering the fan base. Dark Souls 2 does an excellent job managing this tricky balancing act.

Dark Souls II arrived earlier on the PlayStation 3 and Xbox 360, with Matt giving us a really good read into the history of the franchise and how he felt about the newest changes both in the game’s mechanics and themes. Like Matt, I had played the King’s Field games and absolutely soaked up the intense, gloomy atmosphere of Demon’s Souls when it first came out.

Dark Souls and Dark Souls II are very similar to one another, each iteration feeling as though it was built in a way to appeal to a slightly more mainstream base of fans. There are still plenty of dark, dank dungeons to search through but the world of Dark Souls 2 feels larger and more alive than its predecessors. The extra splashes of distant light across the water or spots of wild vegetation that has not yet withered or died might seem like a very different path from Demon’s Souls’ endlessly dark caverns and gloomy towers, but for me this evolution in the series really works.

The undead attacking with a backdrop of lush, living forest creates an interesting juxtaposition at the heart of Dark Souls 2. This is a world that is alive, but it is slowly decaying from within. The player’s own character represents this, becoming more ghoul-like in appearance with each death as a curse takes hold. Sunlight glistens beautifully off of the water and a village that appears safe, but can still with a single misstep or unexpected rush of creatures, which are meant to be livestock (I think) that lunge out from the nearby foliage. 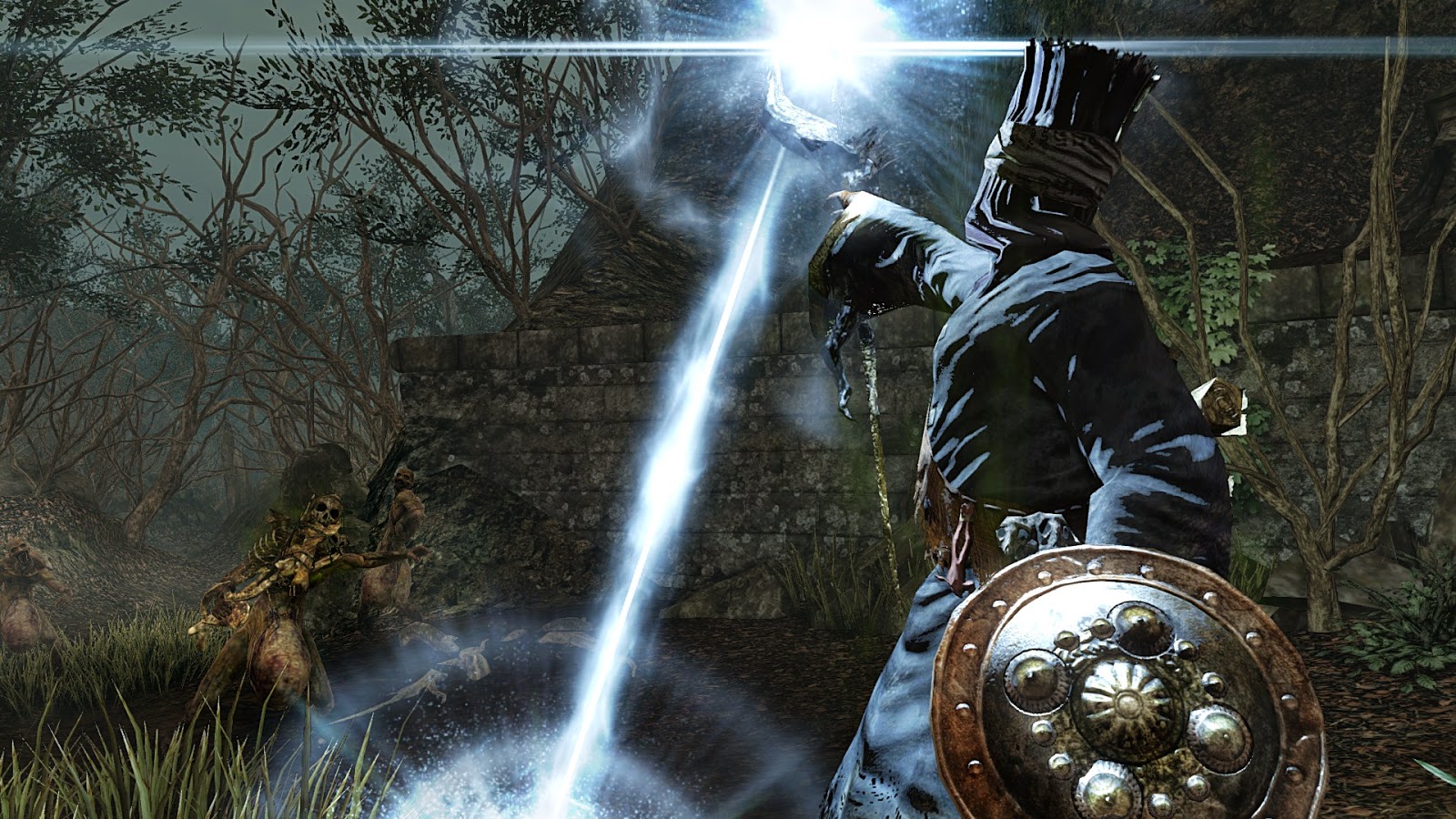 Dark Souls 2 always hints of more. It’s a world to fight for, with true humanity always just out of reach – before pulling the rug out from under you and reminding you time and again that your efforts to navigate through the world are pitiful. The poor quality and ineffective armour and weaponry that your character wields is an indication he or she did not explore thoroughly enough. The souls, painstakingly collected by defeating enemies to act as the game’s currency, and then lost through a wayward death to a monster, a punishment for acting too hastily.

In many ways the world of Dark Souls 2 is every bit as lonely as its predecessors. There are only a handful or so characters that are friendly. The journey undertaken is solely your hero’s however, and these “friendly” characters will not go out of their way to assist you. Like the glimmers of light and hope scattered throughout the game, ghosted images of other players on other planes sometimes appear near you (the famous “multiplayer” of Souls at work). Their incorporeal forms often congregate around bonfires, flitting in and out of existence like whispers on the wind. Messages litter the ground, sometimes giving good advice, and at other times leading you astray. Bloodstains litter the ground, letting you watch the last moments of another player’s character’s life. All of these are reminders that others have failed along their journey – but give you hope that you too could learn from their lessons.

Like the messages and bloodstains, multiplayer returns in similar fashion to earlier iterations of the series as well. Players can attempt to summon help before taking on challenging bosses and players are also capable of invading other worlds to try and hunt one another down. There is risk and reward to both scenarios and it brings a different sense of tension to the game when you know that there is also a human stalker to deal with in an already hostile environment. 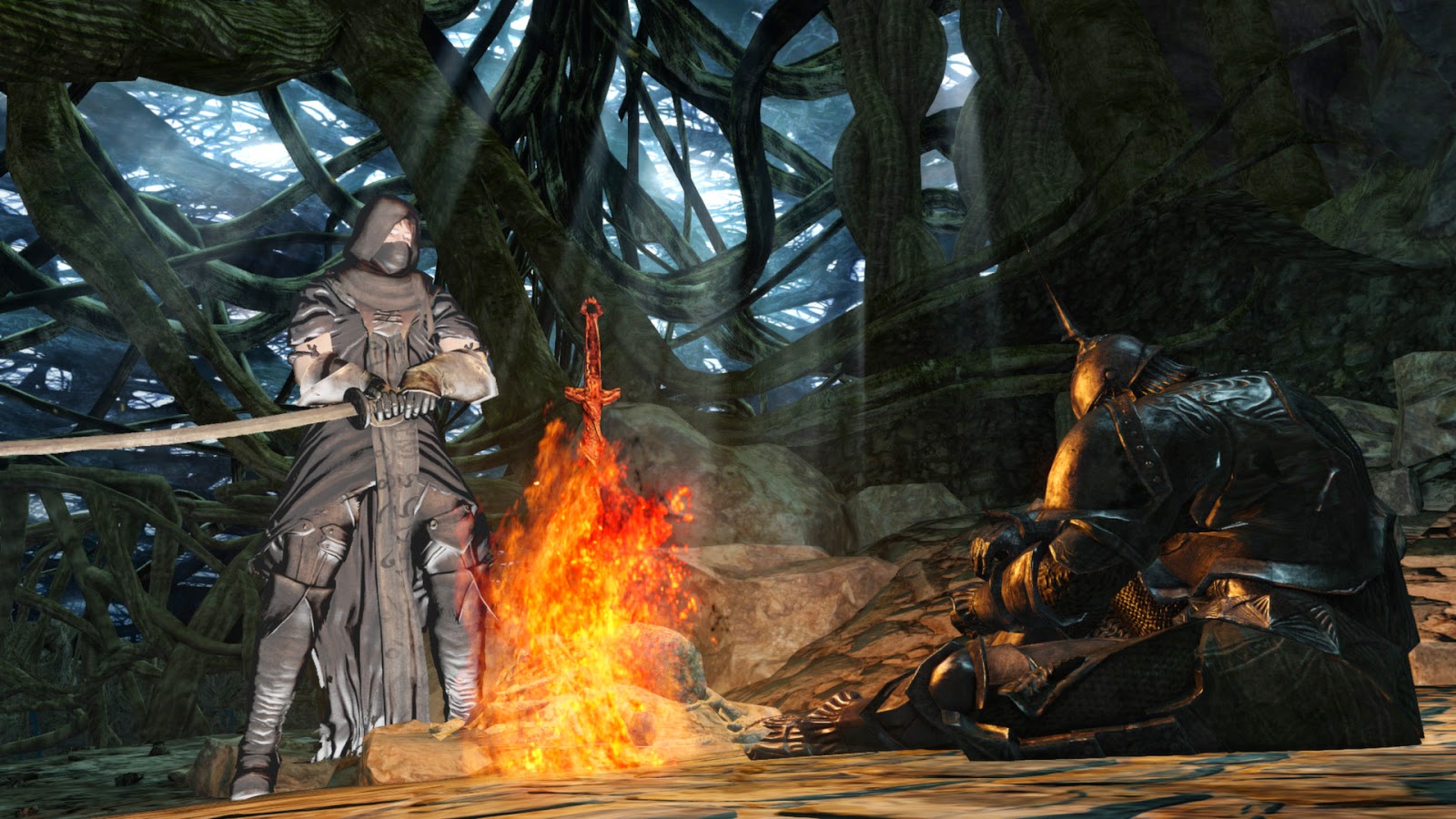 For me, Dark Souls 2 is every bit as filled with an atmosphere of despair as its predecessors, and every bit as rewarding when you successfully figure out the best way to navigate through a zone, or when you find and improve an incredible weapon or finally defeat that boss after hours of trying.

Dark Souls 2 probably could have used a little more innovation here and there, though the statistics make a bit more sense now and the new two-weapon wielding style feels both properly challenging and rewarding for series veterans. It is not a one-size-fits-all solution, but that is the beauty of Dark Souls 2 – there are several ways to tackle every obstacle. My primary character is of the knight class, and he can effectively slide from using a broadsword with two hands, to wielding that same weapon in his right hand while holing a shield in his left. Just as quickly you can toggle out the shield for a dagger in your off-hand, allowing you to deftly change your fighting style on the fly to suit your needs. This flexibility is incredibly satisfying and makes you feel like a skilled warrior capable of handling any situation – with enough practice and patience.

While the weapons retain their weight and varied combat styles, there is enough class diversity to allow players to play the kind of character that suits their play style. If you wish your avatar to specialise in healing magic or offensive magic, you can – though returning players should be aware that magic is not as potentially overpowered here as it was in Dark Souls and Demon’s Souls. If you instead want a heavily-armoured soldier, that is every bit as viable an option as being nimble and rogue-like and roll out of harm’s way to backstab opponents. 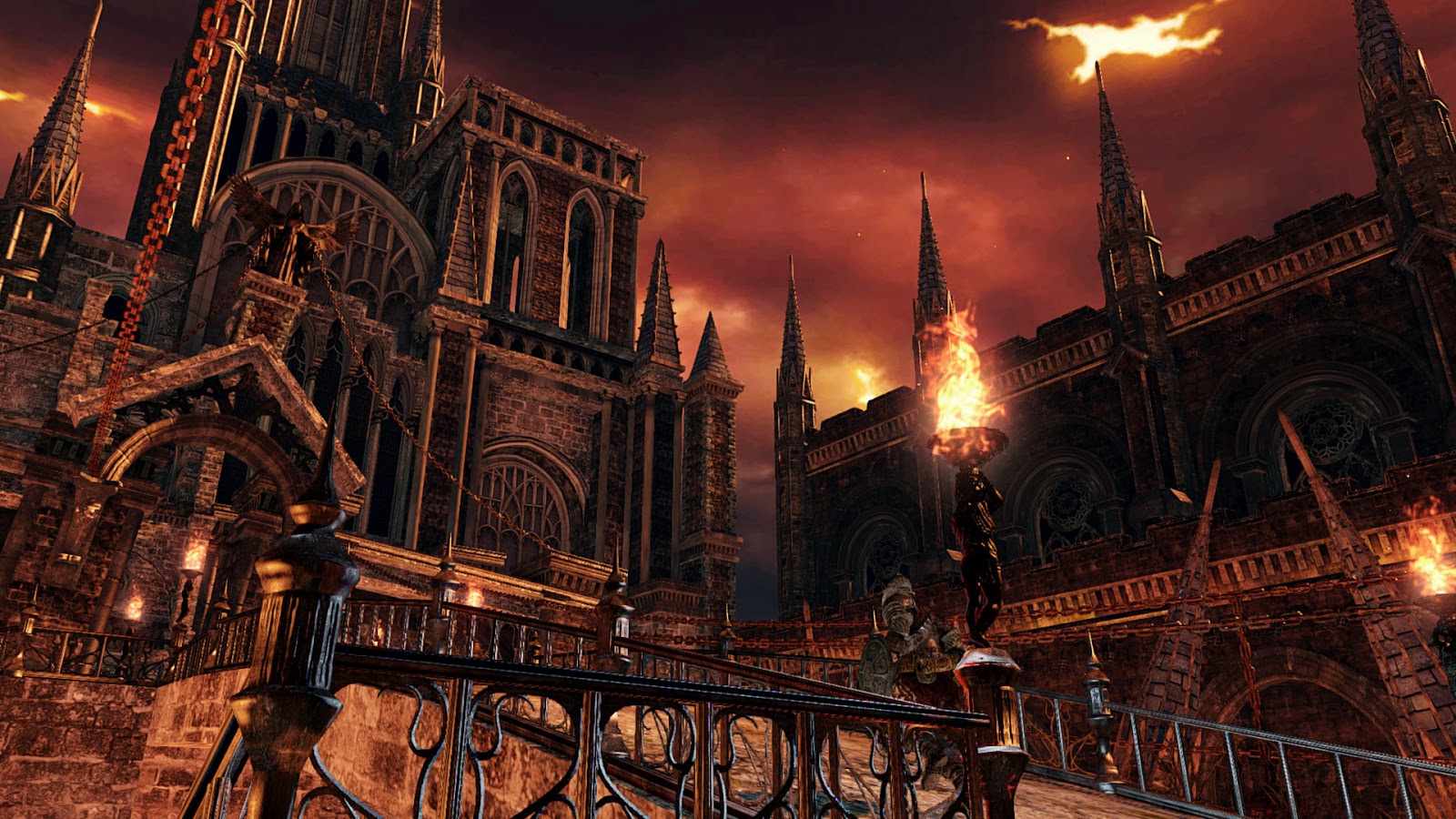 While the additional fighting style comprises one of the major changes to Dark Souls 2 from its predecessors, the ability to fast travel at bonfires is another. The bonfires serve as (mostly) safe havens that restore life. They also now allow the character to jump back and forth between other previously visited bonfires in other areas. This decision could be seen a couple of different ways. Some might feel that it pulls players out of the experience because quick travel feels more like a game mechanism than a something a character should actually be doing. Others (myself included) enjoy the my time is being spent taking on new challenges and exploring new terrain rather than retracing my steps over and over again (like I did in Demon’s Souls).

The decision to allow fast travel from the bonfires works well as a mechanic when taking into consideration that the hub village introduced near the beginning of the game is so very important. More akin to Demon’s Souls than Dark Souls, players do not level up at bonfires but have to return to this village to speak with a character who functions much as the Maiden in Black did in Demon’s Souls in order to level up. Here you will find other useful characters such as the blacksmith, and the ability to get back to these important locations without spending a dozen or more hours hoofing across overly familiar territory time and again feels like a good design choice to me.

Dark Souls had a pretty rough transition from console to PC, and I am happy to report that the process went more smoothly this time around. Dark Souls 2 still has a handful of issues, but that has more to do with individual machines and configurations than the game itself, from what I experienced. I had none of the crash-on-startup issues some players have reported, and one of my controllers had drivers that were not playing nice with the game (so I had to emulate that controller through another program to get everything working the way I wanted). Dark Souls 2 was built with controllers in mind. The keyboard bindings can be somewhat limited, and the mouse and keyboard interface often feels awkward after having spent so much time playing this series with a controller in my hand. My other gamepad worked fine right out of the gates, its drivers aligning much more nicely with the game’s inputs. 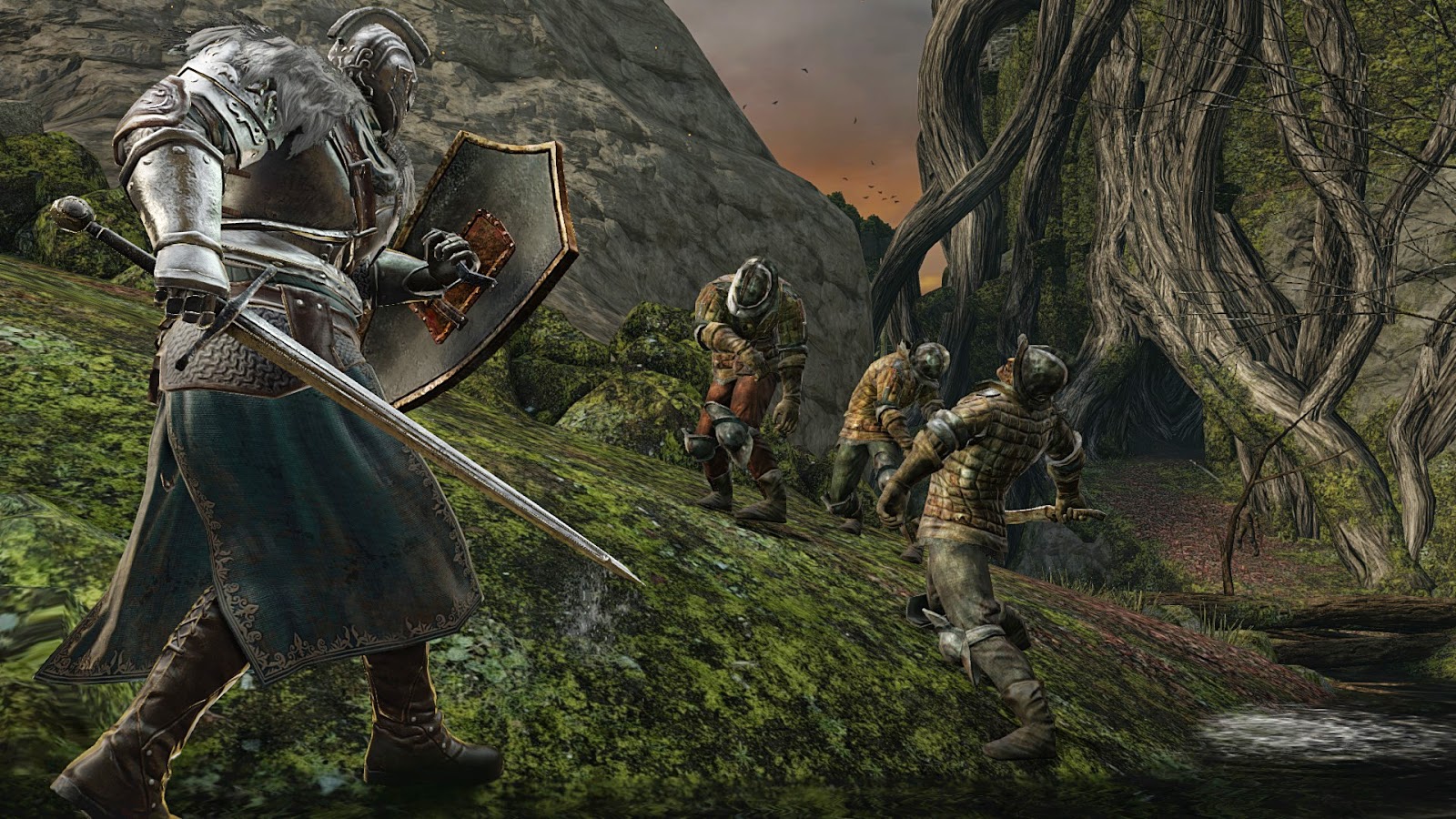 The visuals of Dark Souls 2 are an improvement over its console counterparts, but not by a tremendous margin. There are no notable additional lighting effects or anything like that, but the textures are certainly better and it runs at a very smooth framerate with even a decent PC – and looks great on a powerful machine at 1080p on a big screen.

Dark Souls 2 offers glimpses of hope and illumination, but they always feel just out of reach. Scratching just below the surface to take on the challenges Dark Souls 2 has for you is where this game’s appeal lies. The game will not be for everyone, but for those willing to tackle this game, it is a rewarding experience.