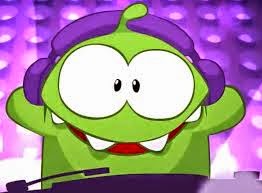 Cut the Rope: Triple Treat is an interesting puzzle game that most of us have played by now in some form or another. Perhaps the most interesting aspect for some people however, is that this is a full retail version of the game most people can get on mobile devices for far cheaper. Is it worth that price tag? It really depends on if you fall into the target audience that this game seems to have in mind.

The basics, first and foremost. In case you have not yet had a chance to spend some time with the cuddly little Om Nom, Cut the Rope is a physics-based puzzle game that starts off pretty basic and as you would expect for a game from this genre, ramps up the challenge over time. The basic goal is to drop a piece of candy in Om Nom’s mouth. You do this by cutting one or more of a series of ropes so that the circular piece of candy can fall or swing into his waiting mouth.

While the same basic set of rules are applied throughout, variety comes in the form of new mechanics that range in variety from floating bubbles, springy ropes and more. On a basic level this game ticks all of the boxes you would hope for from a puzzle title. You have varied mechanics, online leaderboards, well-done 3D effect and plenty of levels (650+). The graphics are bright and colourful and the sound and music are all quite light and fun. There is plenty to unlock and lots of replay value to be had for those who like to go back and better their prior efforts.

The Triple Treat subtitle comes from providing not just the original Cut the Rope, but also Experiments and Time Travel games – essentially three different (if similar) games in one. This series became immensely popular on touch devices like iPhones and iPads and the 3DS is a natural place for it to reside as well. Personally I prefer using a stylus to a finger swipe – it is far more precise. The screen is smaller, but the dual screens add an element of cuteness to the proceedings as the top one is focused on Om Nom the entire time while the actual game plays out on the lower one.

In a vacuum this is all well and good. The problem then becomes the value proposition of a title like this. We had this difficulty back when we reviewed the game for DSiWare, and some of that still holds true here. You are certainly getting a lot of gameplay, but why pay so much more for it when it is readily available for other mobile devices? 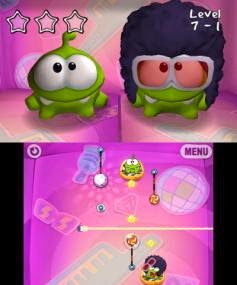 I think the answer to that question comes down to the target audience. Not everyone wants their kids to play Cut the Rope (or anything else for that matter) on their phones or tablets. My kids are a bit older now, with my seventeen year old daughter in ownership of her own iPad and yes – she has Cut The Rope for it. It gets updated releases and is far cheaper with a much larger screen display.

I feel as though this version of the game is meant to bring together the best of what the series has to offer and then to make it available to those who do not have access to these devices. As a parent I would be far more willing to let my five year old niece use my 3DS than my iPhone for an extended period of time. Within that context the $30 price is probably much easier to digest. The problem is so many other people are not in this vacuum and those players probably will not find nearly as much value to be had with this release.

This is a game you could probably give two scores to, because it depends on which side of the fence you fall on. If you have mobile devices available and can get Cut the Rope for a couple of bucks, it becomes hard to justify the 3DS version despite the nifty effects and well-compiled presentation. That would probably put someone at more of a one star out of five value.

The flip side of this is Cut the Rope is an addictive, entertaining game that is perfect for a wide variety of ages in a family. It has a style of play that allows it to be incredibly challenging if you are going for as many stars as quickly as possible, but it also allows you to feed Om Nom and move on to the next level – handy for younger players. If you do not have a mobile device (or you are not willing to share it with a child interested in playing), then this is a completely viable alternative that could easily wind up being four out of five stars.

I will split the difference here and let you decide if you are the target audience for this adorable puzzle game or not. If so, there is a lot to like. If not, you can probably find better value elsewhere.