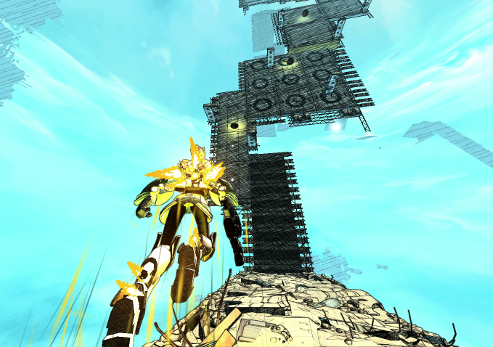 Cloudbuilt had me excited from the very first screenshot. Here’s a platformer inspired by freerunning, set in a picturesque landscape floating in the skies. Freerunning games are a lot of fun to play since they are a fusion of precision and creativity – it combines two of the core reasons why we play games. Does Cloudbuilt live up to these lofty expectations, or does it lose its steam?

You play as Demi, an injured and recovering soldier who dreams of herself traversing levitating platforms in unfamiliar territory. Demi is equipped with a jet pack which facilitates many of the stunts she performs – it allows her to run up walls, gain height while wallrunning and dash at incredible speeds. You’ll need all of these abilities to get through each of the game’s levels, and despite a tutorial which clarifies all the techniques, the learning curve is very steep. 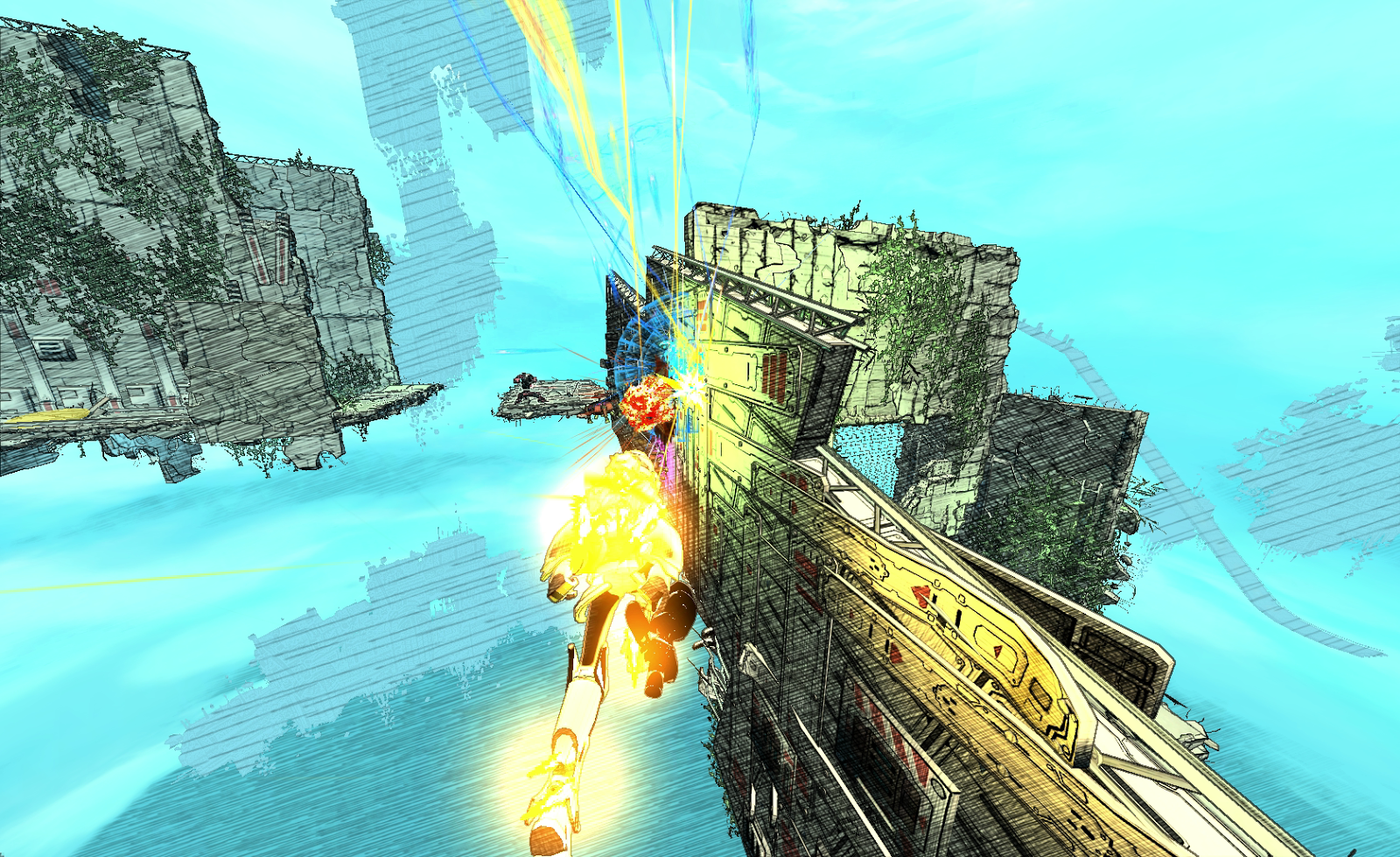 Thankfully, Cloudbuilt’s level design is refreshingly creative and carefree. Levels are designed with a similar ethos as the Genesis Sonic the Hedgehog games – there are several paths through each level, splitting and converging back into common checkpoints. There are segments which require precise platforming and others which let players reach maximum speed, so there’s always some variety in your adventure.

I would normally disagree with a developers’ decision to add gunplay into a game such as Cloudbuilt, but I’ll make an exception here. Usually when the player is given a gun, the natural response is to first attend to all enemies in sight before moving on. Indeed, since that’s what modern gaming has taught me to do, I wasted a good amount of time on the early levels shooting anything that moved rather than running towards the exit. The game quickly caught on and started giving enemies shields and invincibility. In Cloudbuilt, enemies aren’t a means to score points or progress but rather serve as impediments to your forward movement. It’s possible to ignore them entirely as long as you stay on your toes, and often that will lead you to a better finish time. Sometimes the enemies do their job a little too well and smack you zealously off into the abyss, but most of the time they add the right amount of challenge into the mix. 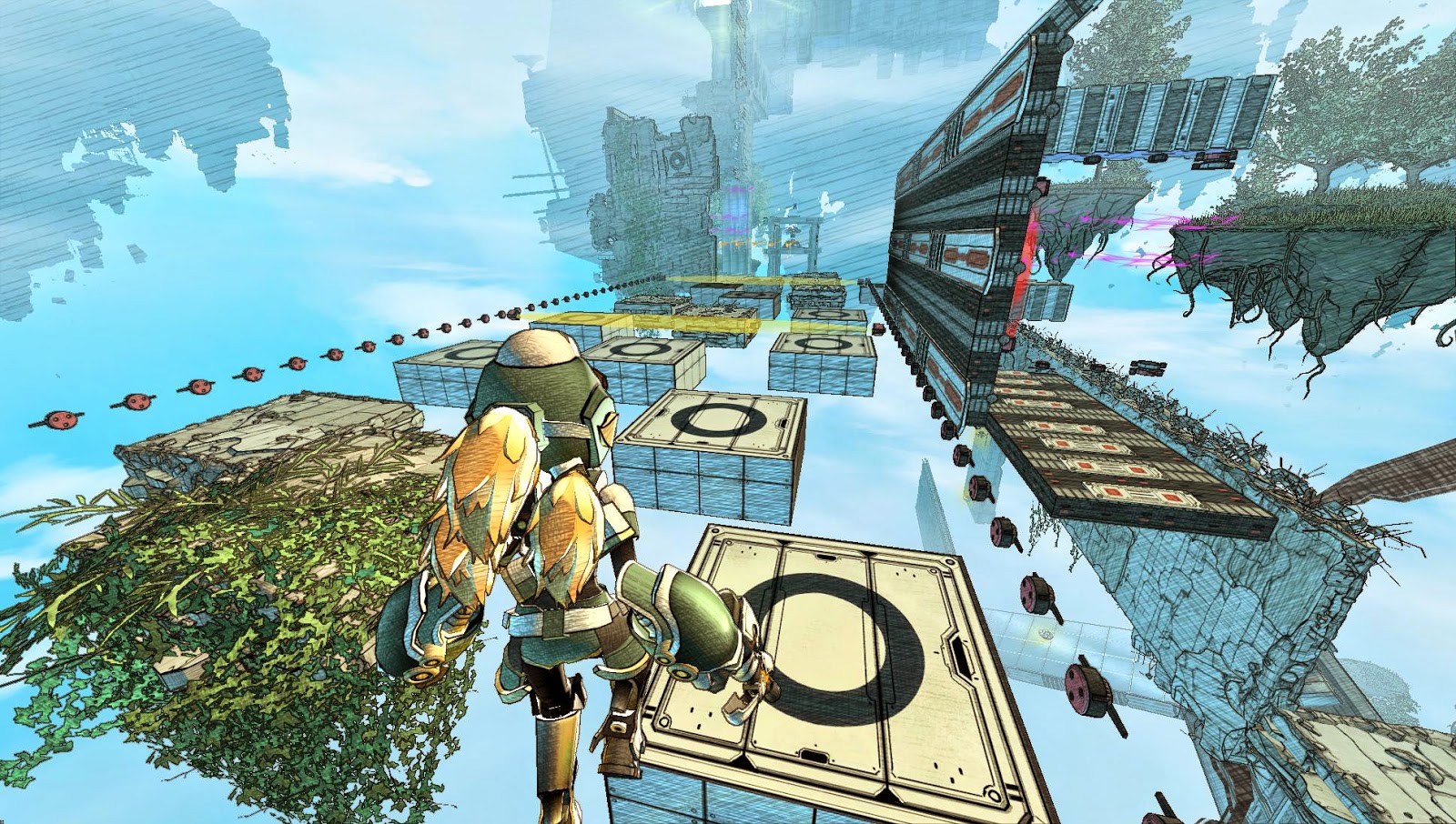 Cloudbuilt is definitely one for the speedrunners. While the controls are somewhat loose, they offer a substantial amount of freedom to tackle the game’s environments. Each level comes with several par times and can be replayed with modifications to freshen the experience. Unfortunately for those who aren’t speedrunners, the high degree of difficulty will be good reason for frustration. Checkpoints are sparse and the game rewards you with extra lives after doing well on a level – this means that players who can’t get past the initial levels will have an even harder time. Ideally, I would have preferred to see some easier levels to ease the player into the game, with challenge levels as side paths which don’t impede on story development. As is however, the less experienced gamer will have their patience tested by very hard initial levels that can take up to thirty minutes each to complete.

Visually and aurally, Cloudbuilt hits right on the mark. The graphics are conveyed in a colourful, cel shaded style which conveys the game’s desolate setting wonderfully. The palette and environment design is highly reminiscent of Bastion’s post-Calamity world, giving off atone which is both vibrant and contemplative. The music alternates between a quiet piano motif and high intensity electronica, both fine tuned to fit the game’s story and action respectively.

Despite being a wonderful mix of eclectic and refreshing ideas, Cloudbuilt’s difficulty relegates it as a hard sell to all but the most dedicated speedrunners and challenge gamers. It’s most definitely a game where fun has to be earned and there are no cinematics to make the average gamer feel empowered. Instead, prepare to fall off the edge of the world over and over until you finally develop the skill to enjoy this game for what it is.

Tex Murphy Returns To The Small Screen Later This Month