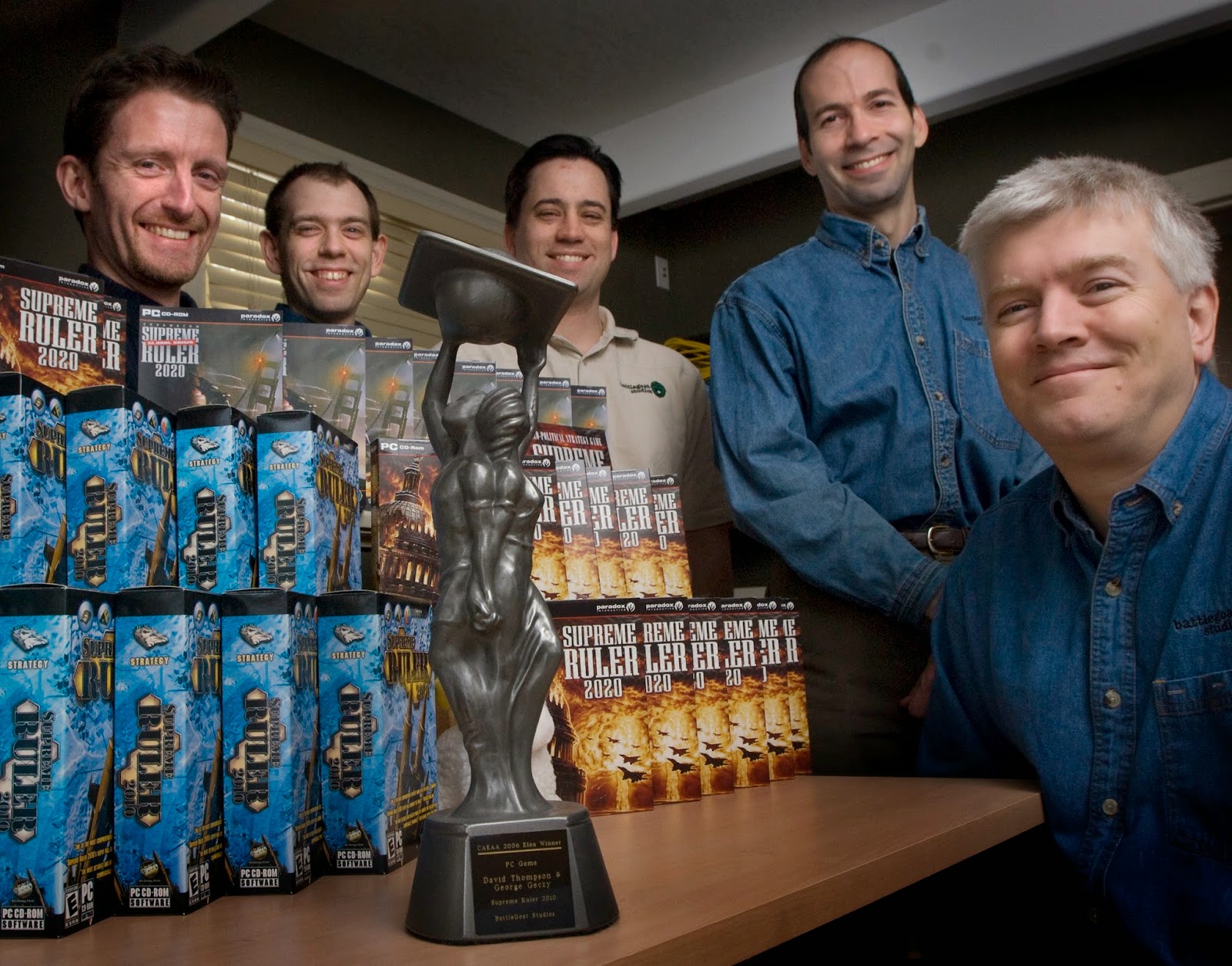 According to BattleGoat’s Lead Programmer and Co-Founder, George Geczy, World War 2 is a popular conflict to capture in video game form for two main reasons – it was a time of rapid technological change, giving the era a dynamic that has not been seen since, and it was a conflict at a global scale with lots of “what if” moments.

Supreme Ruler 1936 is an upcoming strategy game from BattleGoat that covers World War 2 on a global scale. It’s an ambitious project from a small team, and we sat down with Geczy and the other studio Co-Founder, David Thompson, to have a chat about the development of the game.

Digitally Downloaded (DD): What inspired the development of this game?
David Thompson (DT): The original Supreme Ruler game was developed in 1982 by George. He developed it as a text game for the TRS-80 line of computers while he was still in High School. Fast forward 18 years and he and I co-owned a computer retail store and had been in that business for 15 years… Retail can burn you out pretty thoroughly so when we had the opportunity to sell the store, we discussed what business ideas we would like to pursue instead and re-inventing his Supreme Ruler game for modern computers was at the top of our list. 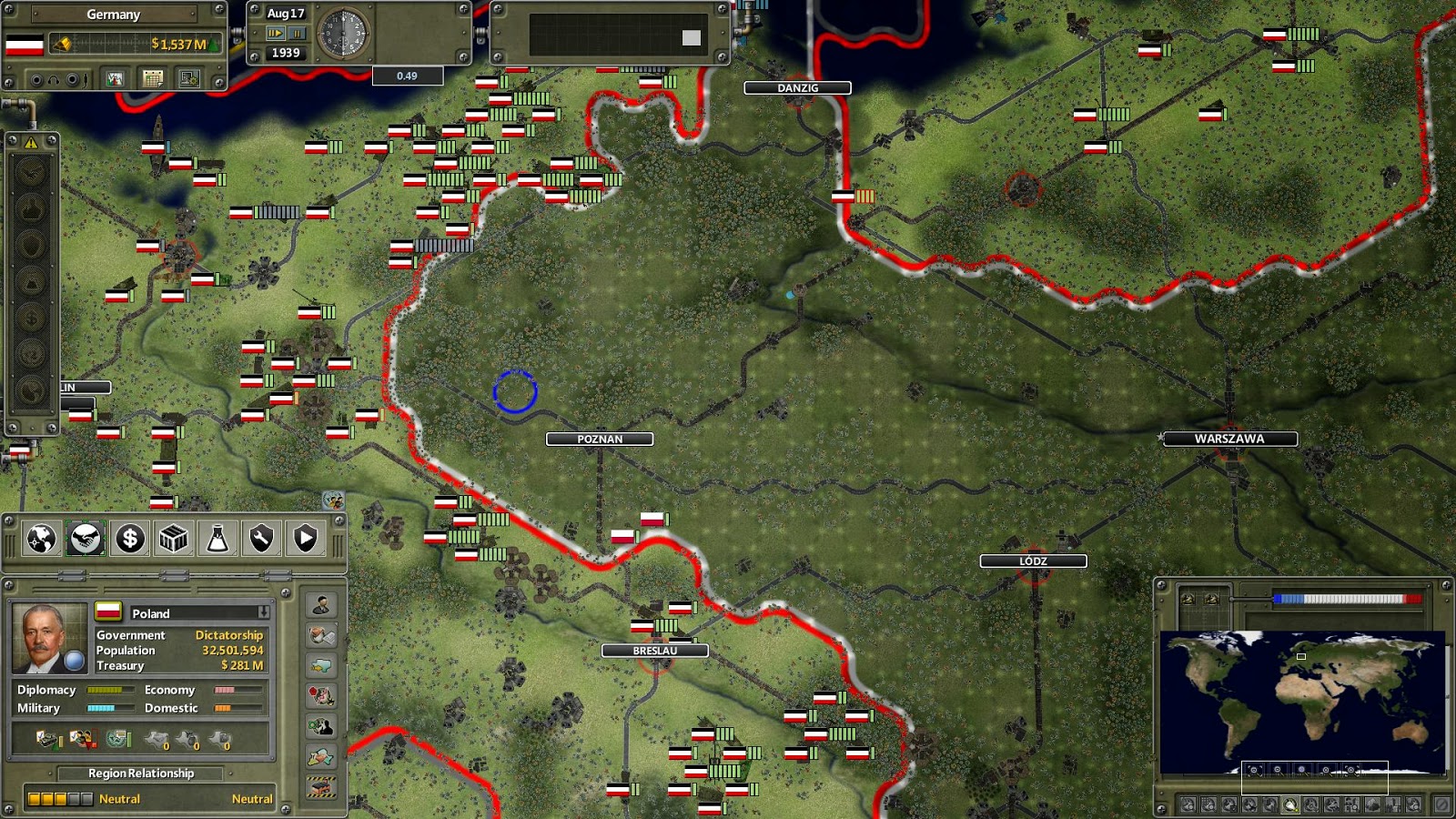 We both liked strategy games and as the owners of a computer store we saw most new releases, and there weren’t that many really smart games. So, we thought that would be a perfect little niche. We know that there are a lot of people that like to play games that make them think, not just exercise their mouse buttons. That has really been our inspiration. One of the reviews sites commented about our past games that it is “…impossible to play our games and not learn something” and that’s one of the comments that has made me most proud of our work. And another highlight was when President Obama was first elected and IGN did a “Top 10 Games for President Obama” to help him learn his job, and Supreme Ruler 2010 was number one on that list!

DD: Military strategy games based on World War II are an incredibly popular theme for developers. What do you think makes the subject matter so compelling for developers, as opposed to, say, the Vietnam, Korean or World War 1?
George Geczy (GG): World War II is one of the few periods in our history that reflected so much happening over so brief a period of time. The battles were often quick moving and decisive, technologies and equipment progressed at a pace not seen before or since, and the scope of the conflict truly encompassed the entire world. In addition, the war was filled with a series of “what if” turning points, which has meant that World War II is not only the source of significant historical research and debate, but it is an ideal stage for strategy games that will allow players to test their own “what if” situations. To many players World War II and the period leading up to it represent the most significant and unpredictable period of human history, and that alone makes it an irresistible backdrop to a game with the depth of Supreme Ruler.

DD: How important is historical accuracy to you, and how did you go about building that into your game?
DT: Historical accuracy is very important, particularly in a WWII strategy game… to a point. We have different historical starting points for players; March ’36; May ’40; and June ’41 and it is very important that relationships, military inventories, economies, etc are accurate to those starting points. Where the player goes from there though should not necessarily be as defined. We have over 7000 historical events built into the game, big and small, and most of those are conditional upon other events already having happened. It really all boils down to how players want to play our game. We have structured Campaigns that provide players a set of objectives to guide them along a historical path, and we have a Sandbox mode that allows players to go completely off the historical rails if they want! Eventually most players will be creating a new history… because if they’re playing as Germany, they certainly won’t be playing to lose.

DD: We see everything from the most casual to the most intensely strategic games with the strategy genre. Where are you positioning this game, and why?
DT: We’re certainly not a “Casual Game” by any stretch of the imagination! If you created a scale from Casual (0) to most grognardy game possible (10), I’d probably put us at about 8. As I’ve commented before, we want to develop games that force the players to think about what they’re doing. In general though, strategy games go off in one of two directions; they are structured for only strategic combat and big picture decisions, or they concentrate on military tactics and deal far less with the governing of a country. We have always pursued the mix of both making the big decisions AND making sure not to lose the tactical element of warfare. Most of all, I think this is what makes our games unique! 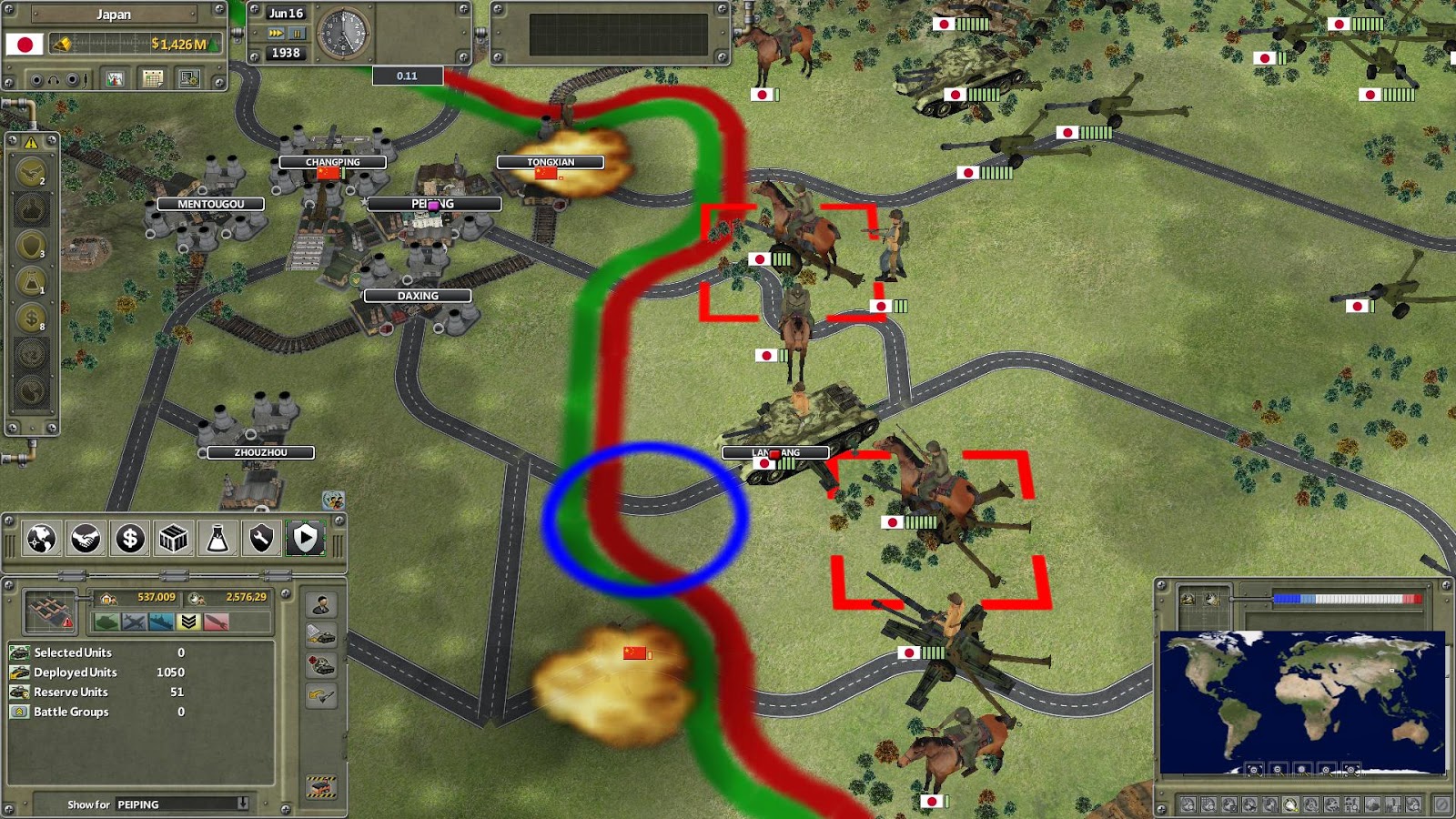 DD: How difficult is it to create an engaging strategic framework for a game?
DT: It’s not easy, or everyone would do it! The biggest hurdle to enjoying the Supreme Ruler series is taking the time to learn the intricacies and relationships within the game and understanding that every component, from the economy, to the diplomacy, to finally the military, are all key in achieving victory. The most difficult issue we’ve had in our fourteen years of development is making the User Interface as intuitive as possible and doing our best to limit the learning curve. Once players understand the framework within the game engine, then their enjoyment skyrockets.

DD: AI is notoriously difficult in strategy games. How have you approached that side of development and what can people expect from the AI?
GG: The AI for all Supreme Ruler games has always been challenging due to the scope of the game, both in size (the whole world) and depth of the the elements the player can influence. One of the rules we set early on is that the AI would not cheat, and we’ve maintained that throughout. Another is that the AI would not be “hard wired” to maps or situations, but would instead be able to analyze and react. In SR1936 there are some places where we do add historical events that help direct the AI to behave in a manner that was true to the leaders of the day, but once history “goes off the rails” then the AI is on its own.

The Supreme Ruler AI is actually based on a series of layers – military units have their own individual AI to respond to local events, the Minister AIs can direct bigger picture items including strategic military plans, and the Ruler AI co-ordinates the priorities and goals of the entire country. Technically, the AI code in SR1936 is multi-threaded, and this both helps performance and allows the AIs to be constantly monitoring the game and the map. In practice, as in all strategy games we have some tough challenges. Our military AI at the default difficulty level is often too hard for new players, and too easy for experienced players. We need to be able to challenge players without smashing novices. The Ruler AI is also set up to try unexpected and risky strategies on occasion, which look good when they work but are often considered as bugs or poor AI if they fail … and yet players don’t want AI that’s predictable or repetitive.

DD: How would you like to see people respond to this game?
DT: Obviously we want our players to enjoy the experience of playing SR1936. For new players that means that they have to take more than ten minutes and expect to master it. We’ve been running the Early Access on Steam for a few months now and the reaction has been great. It demonstrates that there are a lot of people that are looking for games that challenge more than just their mouse finger.

DD: What are some of your longer-term plans? Both with this game and subsequent projects?
DT: There are some additional Campaigns and Scenarios for SR1936 that we’d also like to do, so those will keep us busy for a while. With our past titles we have always incorporated new ideas from players and adding additional content long past our release date, and that will continue with Supreme Ruler 1936. Beyond that, no plans we’d say publicly… We’re a small studio and only work on one project at time, so obviously our focus right now is solely on this game. We have all sorts of other ideas we’ve kicked around and we’ll discuss those long-term plans post release. 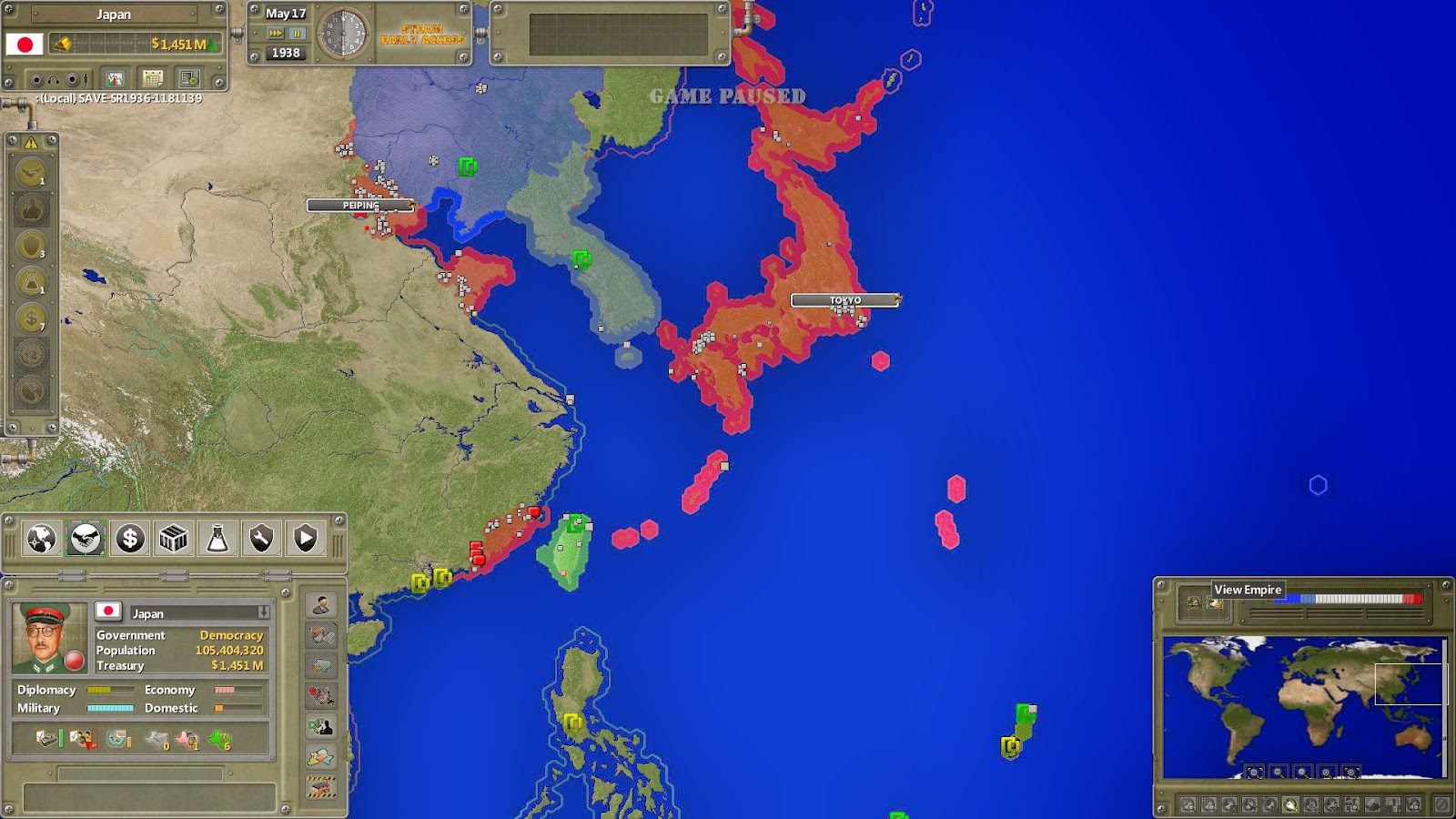 DD: Who would you say inspires you the most when it comes to strategy game development, and why?
DT: That’s a tough one… I haven’t really been “inspired” by a specific strategy game in quite a while. There really hasn’t been that much innovation lately. The graphics are getting nicer of course, but too many games seemed “dumbed down” to try and appeal to a wider audience. I don’t think that really serves them well. It certainly doesn’t make them as memorable! If I had to identify the strategy games that first captivated me in this genre and influenced how I envisioned our game though, that’s a fairly easy answer: Panzer General, XCOM, and Civilization II. These games set new standards and we aspire to that same level of excellence. Maybe someday we’ll get there!

GG: The tactical-strategy elegance of Panzer General and the world-building scope of Civilization are obviously both major influences. Some of the Real-Time Strategy gameplay elements of the Supreme Ruler series have also grown out of the foundations of RTS games like Red Alert and Empire Earth. Even the early strategy game Empire Deluxe was an influence to the type of replayability and interest you can get out of a tactical strategy design. More recently, there is also good work being done in strategy games by Paradox Interactive, Stardock, and Matrix Games, but it is certainly a genre that has a lot more potential for taking advantage of the scope of gameplay that modern computers support.

DD: Finally, what games are you playing at the moment?
DT: We’re in “crunch” mode and the game is less than two months from release… I’m not playing any other games at the moment! I can tell you quite honestly that the first games I go back to once we’re launched will likely be the latest iterations from the previous question: XCOM – Enemy Unknown; Civilization V; Panzer Corps. I’ll probably try a few newer games of various genres to see if anything captures my fancy, but I always go back…