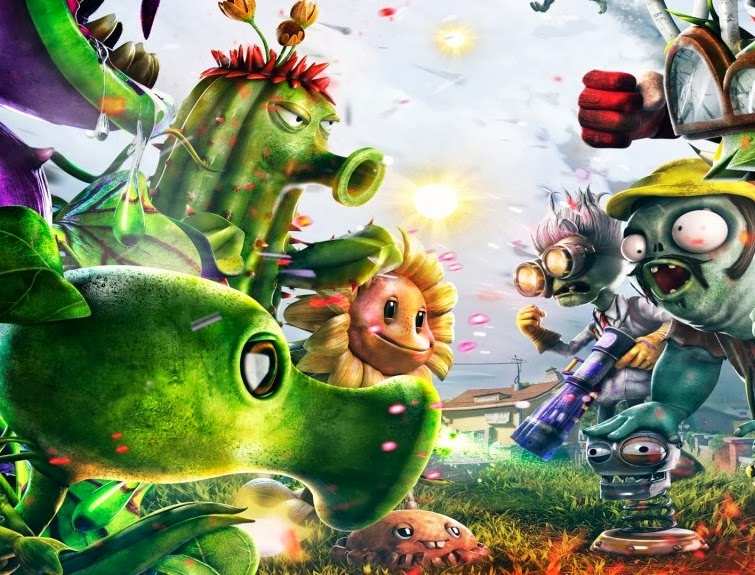 Why can’t more shooters be like this? Plants Vs. Zombies Garden Warfare is a joy to play. It’s technically competent and well balanced, uses the excellent Frostbite 3 engine, has plenty of depth, and unlike almost every other shooter out there it doesn’t rely on gore and ‘mature’ imagery to be engaging. And most importantly… it’s simply good fun to play.

Just about everyone has played the original Plants Vs. Zombies in some form by now. PopCap (now owned by EA) created a breakout tower defence game thanks to a bright, cheerful personality. After all, a game starring flowers and plants with big smiles on their faces locked in an eternal battle with silly zombies wearing metal buckets for armour… it’s just silly enough to be awesome, even if the tower defence genre it belongs to isn’t exactly known for its outstanding gameplay.

Plants Vs. Zombies 2 might have been a horribly cynical free-to-play game, but PopCap has redeemed itself with Garden Warfare, which takes the spirit of this eternal war, and turns it to a multiplayer-only deathmatch experience.

So how does that work? Players take on the role of one of four zombie or plant types in team-based competitive shooter action. The cactus is a long ranged sniper, while the sunflower takes on the job of a healer. On the other side, the zombie wearing the American football costume is the heavy hitter, while the stock standard trooper has the ability to propel himself into the sky and reach great vantage points with ease. Each unit has a range of special abilities to it, which can be upgraded by playing well and “levelling up” each character type. Personally I decided to specialise in the cactus. Sniper classes are always hit-and-miss with fast-paced shooter games, but thanks to the ability to put down mines and temporary barricades I felt like I was able to participate in battles in a meaningful way. 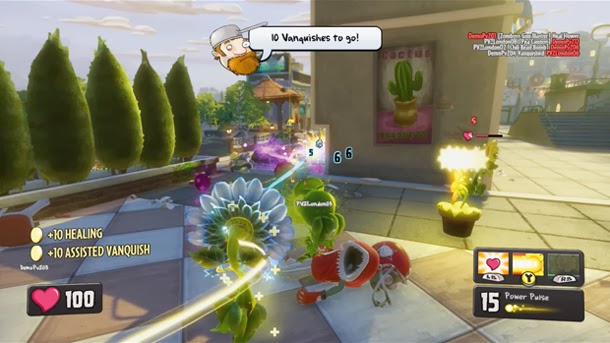 There are a couple of different gameplay options. The most straightforward is the team deathmatch, but there’s also a truly great take on the king of the hill structure where zombies need to capture a key point which the plants need to try and protect. If they succeed at that, they’re given a new objective, and the goal is to keep capturing these points on the way to the plants’ main base. Each objective has a set time limit, and if the zombies fail to capture any one of them, it’s game over. This mode is a load of tense fun. It’s genuinely edge-of-the-seat stuff, but from what I experienced it is incredibly difficult for the zombies to succeed in this mode.

The final gameplay mode is co-op, where players need need to protect a base from a series of zombie waves. This one is the most like a tower defence game (and has points where players can “build” support plants to help deal with the waves), and it’s also the only mode that can be played solo, but truth be told it’s not as engaging as either of the other modes because it lacks that competitive edge, and once the final wave is downed there’s not much incentive to play again.

There’s not many maps to play on. They’re very well designed and balanced, but the picture needs to be painted here; though it’s a budget-priced release, it’s also one where the raw content is quite thin. With that said, as long as the game’s servers remain populated, then each battle is going to be a different experience, and while there might not be many maps, those that are in the game brim with strategic opportunity; mastering these maps takes plenty of practice. Garden Warfare has a level up system that’s easily as rich as anything you’ll find in other full-priced shooters. In addition to raw experience points, players also earn coins from each battle. This can be used to purchase stickers, which can be used to customise characters. These stickers come in packs that are random, and while it’s a bit frustrating trying to earn the right sticker to finally unlock that flaming special ability that you’ve been looking for for hours, it’s certainly an incentive to keep playing. 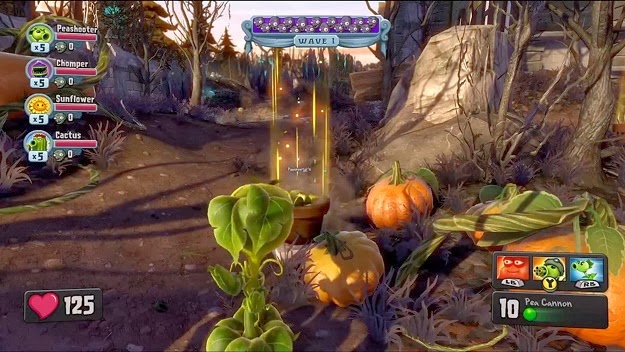 The real appeal of the game is in its presentation. The music is light and bouncy, the visuals are bright and colourful, and there’s plenty of humour in the way units animate. I can’t describe in enough detail just how happy it makes me to finally have a full-featured shooter game that is bright and pleasant; though I have no particular problem with serious and grim shooters, it’s nice to have an option for when I’m in the mood for something happier.

There’s the added benefit that the theme of the game is bright and happy enough that the dudebros will stay right away from it. After spending many hours playing the game for this review it was bliss that I didn’t need to mute three quarters of the players. With Titanfall around the corner I think it’s a safe bet that Garden Warfare’s community will shrink a little (or more than a little), but those that are left with be the ones worth playing a game with.