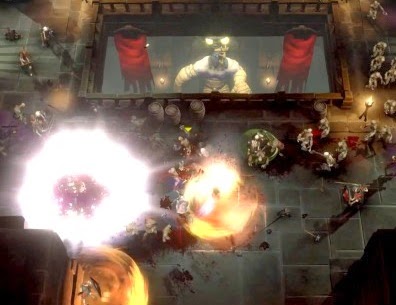 Those of us old enough to remember spending time at arcades will also remember Gauntlet as a top-down dungeon hack, where players would need to continue either adding more coins to the machine, or consuming precious meat to restore their health. Why? Because health would continue to decline as they played.

Enemies would come at players in massive swarms, and while the range of attacks available to each character was minimal, and there wasn’t much more to the game than slaughtering those enemies, in multiplayer the Gauntlet games simply could not be beat.

Warner Bros. has released a trailer for the new Gauntlet games, and it looks more Diablo than Gauntlet (and it is being described as an “modernised action RPG” rather than an arcade game), but it’s interesting to say the least. Enemy swarms are huge and each character looks like they have a range of different attacks now, which should help deepen the single player experience, which was always Gauntlet’s Achilles heel.

Each of the four character classes – Warrior, Elf, Wizard and Valkyrie – makes a return, with their focus from the original Gauntlet untouched. The Warrior continues to be the melee powerhouse, while the Elf has a bow for ranged attacks.

The trailer below looks great. So far it’s a PC-exclusive game, but fingers crossed in makes the leap to consoles as some stage.

Here’s your first look at the next Atelier game