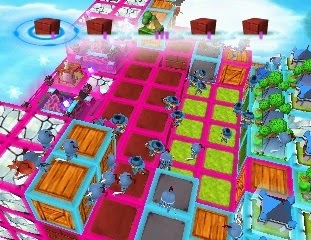 Cube Tactics is a curious and entertaining blend of a 2D straight lined Tower Defense styled game with RTS elements in a cubelike 3D world.

The game starts off on a charming note with the introduction from the greatest Cube Master – Sir Knight who will teach you the basics of setting cubes down in order to defeat the opposing team(s) all in the name of sweet victory! The introduction levels are nice and easy and take care to properly teach you how to play the game by adding new elements with each new level. Not everything is shown to you in the tutorials, however, and the game does allows itself to give you a shock in the later levels to keep things interesting.

The game itself exists on a multi-levelled field which is interesting. Sometimes the field is already set and you have to make due with the hand that the game dealt you, while other times it’s possible to create the paths that characters will follow. Cubes may only be placed either beside or on top of your own starting cubes, as well as on top of captures enemy cubes as you head over to rampage through their defenses. The same rules apply to your enemies so care has to be taken to not give them a straight path right to your core.If it sounds confusing, it isn’t really, it’s simply an abstract approach to an abstract game. 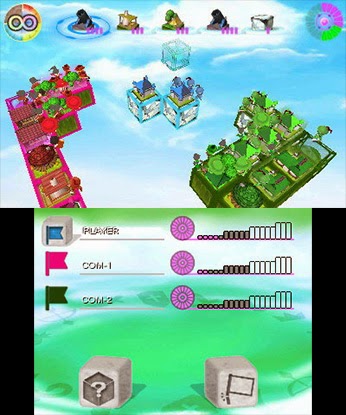 As fast paced as the game can be, and as fast as you want to complete the levels for a gold trophy, caution is highly recommended. Going into any situation blindly is tantamount to obliteration… a fact that I forgot once or twice thinking that I had a master plan and the CPU wiped the map clear of my presence quickly. Level score is determined by trophies. Bronze if you just completed it, Silver if you completed it well, and Gold if you aced it within the recommended time. Those Gold trophies can be a nightmare to obtain, but obscene difficulty for Tower Defense is not uncommon.

The level maps themselves are where the game shines. Specific building types can be used to create different units that are pretty standard for fantasy settings. Knights, Archers, Mages, Clerics, Builders, Ninjas, you know the drill by now. The trick is figuring out which units work best against what the enemy has lined up, whether it be their own barracks, poison fields, bear traps, barricades or large cannons that can wreck obliteration on your cubes and your forces. Placing these cubes strategically allows for possible tactical decisions that can change how you place your base and how the enemy can makes its way towards you. Each unit generator has an arrow that dictates which direction that the unit will head in. This is where the 2D Tower Defence comes in. Believe me when I say that you don’t want to make a mistake as to where your units are heading. It can end levels rather quickly.

Upgraded units are powerful counterparts that can be created when four of the same type of unit generator are placed in a square formation. Sadly if you have uneven terrain, it just means that you will have four unit generators. The upgrades versions can turn the tide quite quickly even in the diciest of situations. There is a lot of quick thinking to be done in some cases in regards to is it better to A) have more units generated or B) have less but more powerful units to throw against the enemy, and you have a split second to make that decision. 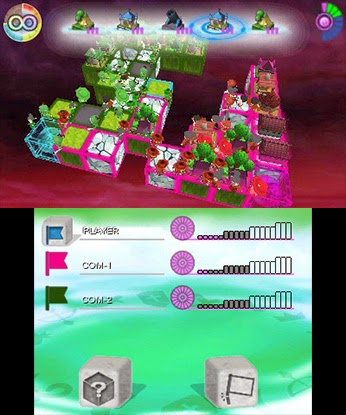 Cube Tactics contains two major game modes. The first is a single player that contains the Tutorial, Quests, and a Battle Royale. The quest option is essentially the campaign while the battle royale is a simulated multiplayer against CPUs that can have a range of difficulty options. The second is Multiplayer which allows you to go head to head against against other players as long as the wireless is turned on.

The only issues that I found with the game were that if you made a mistake you were stuck with it. There was no way to delete a block once it was put down. Other than that sometimes the camera angles were not the most helpful, and in a fast-paced strategy game this can be a killer. You could zoom in and out as well as rotate, but to be able to switch the angles would have helped in a few cases to determine what block was seemingly hidden on the level below.

But, all up, Cube Tactics is quick and sometimes intense fun little game that is quite enjoyable to play for hours on end. Just one more level…