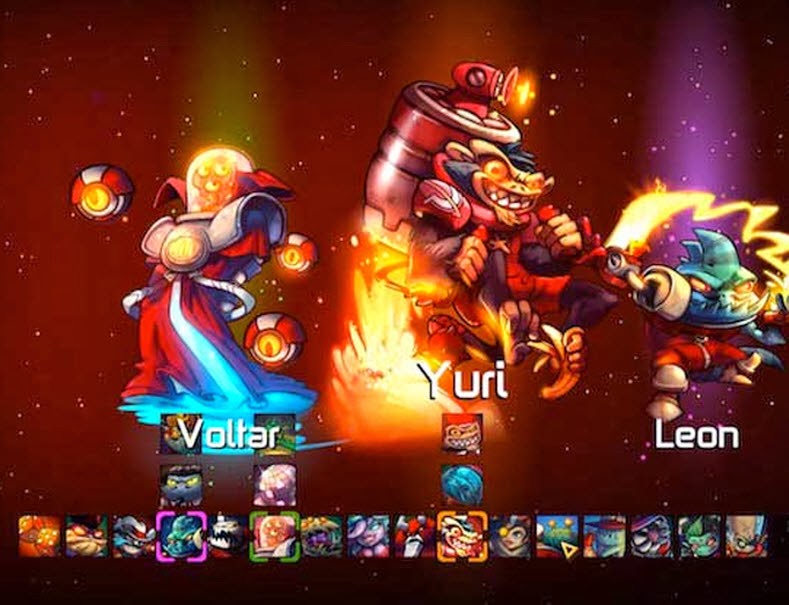 Awesomenauts Assemble! takes an almost ‘kitchen sink’ approach to things, tossing in RPG elements, 2D platforming and MOBA principles to create an addicting experience that is both unique but a lot of fun to play.

If that sounds like an odd mix of things to put together, I would be inclined to agree with you. It is a mix and match that works out surprisingly well however, as you take control of one of several available characters, customise their loadout and proceed to plummet to the planet and make your way from one side of the map to the other. There is a shop at each base where you can purchase upgrades with the money you earn from killing things, adding further to the sense of strategic depth.

Each base is protected by turrets that can do rapid damage to any of the three Awesomenauts that make up either team’s playable characters. There are also mindless drones that each side pumps out that roll or fly from their base toward the other, serving as tanks that soak up the damage from sentries and other drones on the opposing team.

Each stage is layered in levels so there is no single way to go, but once you have cleared a path through the sentries you can focus on the core in the opponent’s base. The characters have a lot of variety to them, with nimble melee characters, dynamite throwing space cowboys, hulking single shot cannon wielders and nimble frog-like Awesomenauts who can hit multiple enemies at a time with a single shot. 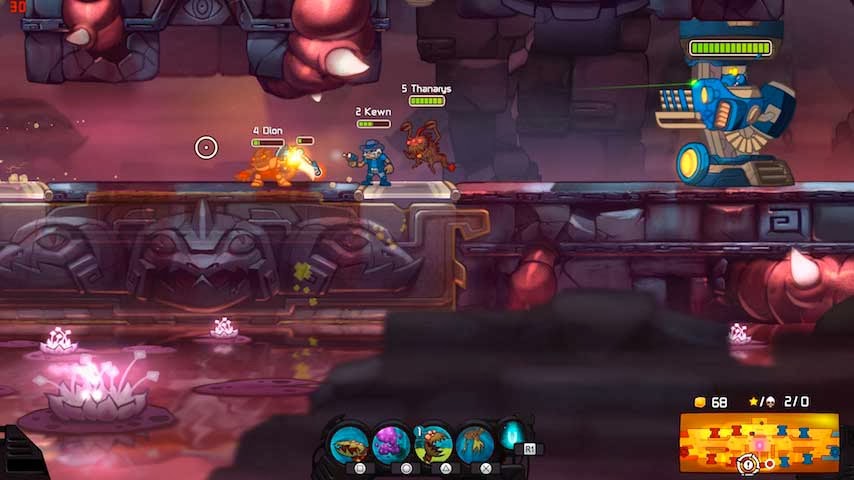 There is a practice mode where you can play locally with friends or against computer controlled opponents, but the real fun is in going online against other players. It is pretty easy to win against the computer in the practice mode, which is a great way to earn some experience which allows you to level up and unlock new worlds and characters. Playing against people online? That is a much tougher challenge, and one that I did not win terribly often – but when I did it was that much more rewarding.

There is a lot of strategy in figuring out if you want to go on the offensive and focus on enemy turrets, or sit back and help defend yours from the opposing team. Which characters and styles appeal to you most? I rather liked the ability to shoot multiple people at once with a lower powered blaster, but I did not care much for his melee style attacks. As you purchase upgrades you have to weigh the merits of doing more damage or improving your own life and defence mechanisms. 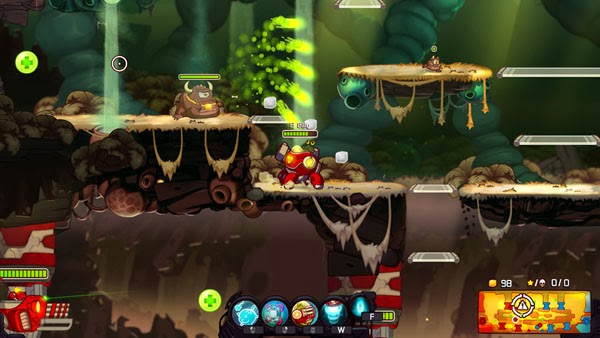 The sessions usually ring in around fifteen to twenty minutes. There is a trophy for winning one in less than ten minutes that I still have not acquired. Matchmaking can take a bit of time, and while the ranking system in theory should be pitting similarly skilled players together, some disparity can still certainly be had. The more often you die, the longer it takes for you to respawn into the match, though those incremental increases are not too frustrating.

If you enjoy some online competitive play, this is a great way to get your fix. If you were already a fan of the Awesomenauts, then it is hard to recommend against this updated version. The visuals are excellent, the sound design is fun and borderline perky combine with an expanded roster of characters and various smaller improvements to create the best Awesomnauts experience to date.

Tale of Tales’ upcoming art game, Sunset, stars music from the guy that did Journey