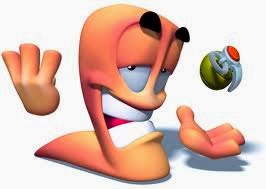 Who doesn’t like Worms? While it can be argued that the venerable franchise hasn’t done enough to modernise and reinvent itself over the years, the announcement of next-gen Worms is certainly worth celebrating.

And that’s precisely what Team17 has done. Worms Battlegrounds will hit PlayStation 4 and Xbox One at some point in 2014. While we have no idea what this game will look like or play like, it’s a notable release because it will also be one of the first titles to be self-published on the Xbox One under the ID@Xbox program, which no doubt independent developers will be watching closely.

If this release is a success than the Xbox One will no doubt see more independent developers and publishers start self publishing their work… which is something the console does need as currently it’s the PlayStation 4 which seems to be encouraging the indies better.

The Worms franchise has been around since 1995 and has appeared on 25 different platforms (here’s our review of the most recent game, released on the Vita). It’s a little like Tetris in that I’m certain that every gamer has at some point owned at least one title in the franchise.

Looking back at PlayStation Minis