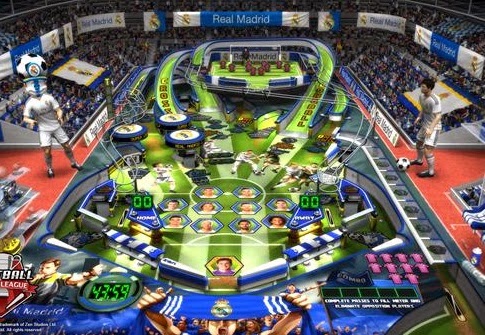 We love Zen Pinball. We love soccer (you’d call it football in other places in the world, but I’m Aussie so it’s soccer, OK?). So Zen Studio’s announcement that it’s combining the two is… well, weird, but wonderful.

This new DLC release allows fans of Arsenal, Liverpool FC, FC Barcelona, Real Madrid C.F., A.C. Milan, Juventus Football Club, and A.S. Roma to play tables based on their favourite teams. It’s absolutely appalling that there isn’t a Crystal Palace team. APPALLING. I know it’s based on Super League, but still. I feel hard done by as literally the only Crystal Palace fan in Australia.

The new tables work like this; when players download Super League Football, they will select the club they wish to support. Their table will be themed in the style of that team, including images of the clubs biggest stars, team mascots, chants and theme songs. As games are completed, scores will tally to each club’s global leader board, providing an overall rank for each club in the league on a global scale on each platform. As you lead your team through league play, you will earn trophies and accolades which will be placed in their own trophy room.

Yep, allowing the soccer fans to take their rivalries to the pinball table is a brilliant idea and I can’t wait to get cracking with the Real Madrid table (since there’s no Crystal Palace team, after all).

This download will be on all platforms that currently have Zen Pinball 2 available on it… with the exception of the Wii U.

Europa Universalis IV expansion announced; this one is all about the $$$s