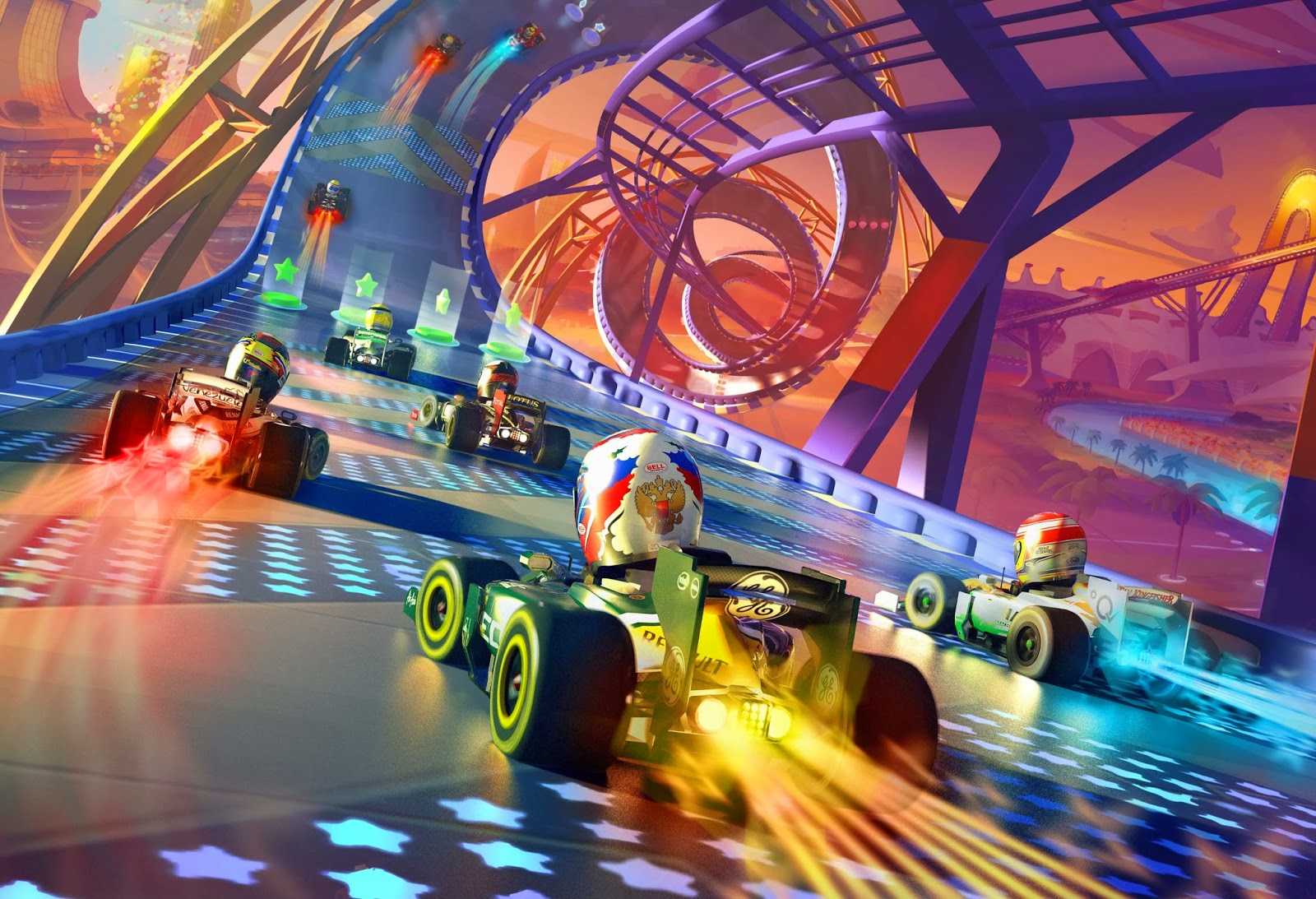 One of the most underrated kart racing games in some time is F1 Race Stars. Taking the quite serious sport of F1 and turning it into a fun party game, while still maintaining something that resembles the real sport couldn’t possibly have been easy, and yet that is precisely what the developers achieved.

And yet the game was released a little over a year ago to absolutely no fanfare and middling reviews. I suspect that reception also seals the fortunes of the Wii U edition, subtitled the “Powered Up Edition,” but I do hope it finds some more fans out there, because it deserves it.

It must be said from the start that the Powered Up Edition isn’t much of an enhancement on the original release. There’s no online multiplayer (though there are online leaderboards for the time trials), no additional content (though you can use your Mii in the place of a racer). It’s possible to play off-screen on the gamepad, or play on TV (in which case the gamepad displays a map of the race). With such limited differences to what exists on other platforms it’s difficult to recommend a repeat purchase for someone who already has the game.

With that disclaimer out of the way, everyone else should give All Stars a go. What starts out looking like a very simple kart racing game indeed quickly shows itself to be a surprisingly slick and speedy experience. At first the lack of a powerslide will make you question whether there’s enough depth to the racing to make the game last, but then the tracks show themselves to be filled with difficult turns, traps, and short cuts. Getting the gold medal in the time trials on each track is a true challenge, because kart racer or no success in this game demands hitting the right racing line, and this reality quickly demonstrates that mastering this game isn’t easy at all. 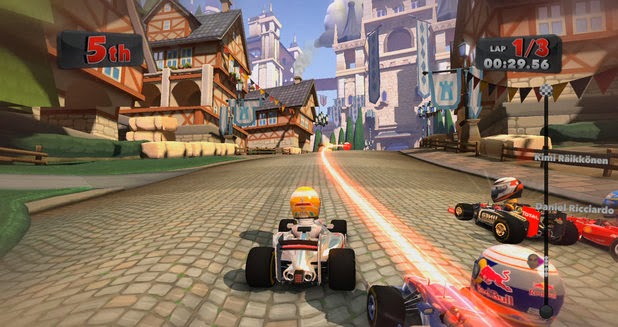 The game’s career mode is also quite meaty, offering plenty of “cups” to vie for, each with their own unique challenges. Some are standard races across a number of tracks, and then the game likes throwing cups with unique challenges into the mix to keep things fresh. My personal favourite is the competitions where every 20 or so seconds the last placed person is knocked out as it makes that last minute with three closely matched racers competing to be mere centimeters ahead and stay alive in the competition.

The game’s first couple of cups are easy enough, but because there’s so many of them the gentle difficulty curve means that the final couple will test most players. Unfortuantly some of the difficulty does come from the kart racing genre’s standard rubber banding, whereby opponents will somehow magically catch up to you no matter how well you’re racing, but generally speaking he who does race well is likely to win in this game; the harder difficulty cups tend to be because the AI opponents hit better racing lines.

While there’s no online multiplayer, the kart racer’s real strength has always been in its local multiplayer, and F1 Race Stars is no different, with split screen support for up to four racers. What’s a little strange about this game’s local multiplayer is that it will appeal more to racing game fans than party gamers, because while Race Stars is an example of an arcade racing game, it’s biggest fault is the weapons, which are in no way as interesting as a game such as Mario Kart and its red shells and mushroom power ups. 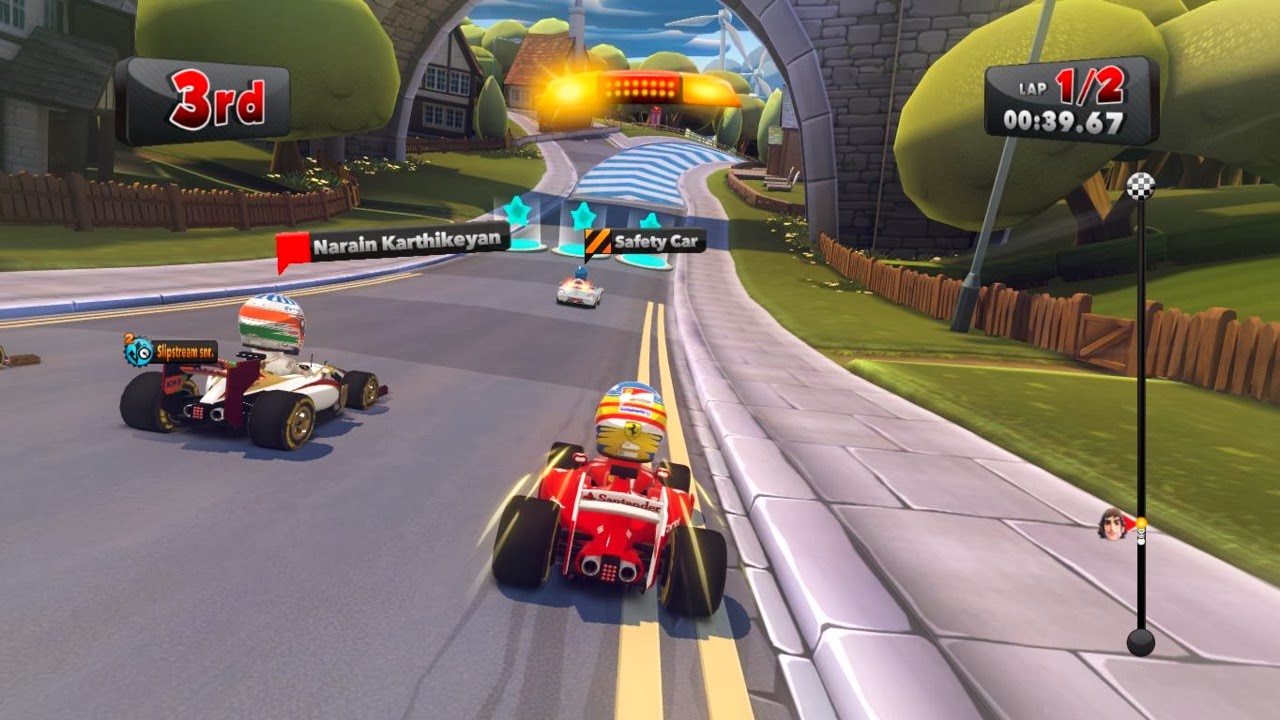 In F1 Race Stars the weapons are all based on real F1 objects. So for instance the powerup that slows down the leader is a safety car. The invincibility star is metal wheels. These items are undoubtably powerful (be hit by a weapon and some of your car will break off, and you’ll be slowed down until you can reach a pit stop), but they’re just not that entertaining.

But the track design really does make up for the weak powerups. Each track is loosely based on its real-world equivalent; the Monaco track is filled with tight corners and blind sports, for instance, and this is mixed in with famous landmarks found within the country that you’re racing in – so for instance the Chinese track includes the Great Wall.

After completing all the missions all that’s really left in F1 Race Stars is the online leaderboards (which are sadly tiny at the moment… it appears that this game isn’t breaking through the charts right now) and that local multiplayer mode, but getting to that point is still many hours of play, and like any good racing game once you get hooked on it trying to shave thousandths of a second off your best time by changing the racing lines is compelling. Coupled with the bright and charming visuals and you’ve got a game that, as I said at the start, was very unfairly maligned.