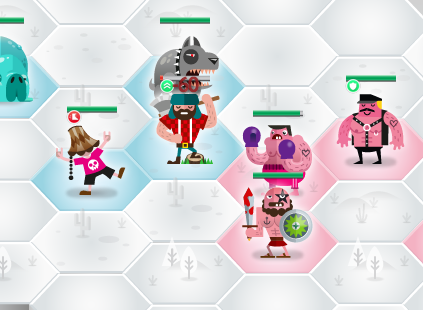 A couple of ex-EA staff have done something brave indeed; despite having relatively few resources, the team has released Atomic Brawl; a CCG/ miniatures game that is directly taking on a host of other big game developers, not least of which the almighty Blizzard itself.

But, Atmoic Brawl has a good chance, I feel. It looks really great, with a bright and cheerful art style that certainly grabs the attention, and because it’s a browser-based game, people will be able to pick it up and play it from almost any device that they have access to, wherever they are.

It’s completely free to play, so if you’re keen to have a look, check out the website here.

This game caught our eye, so we had a chat with one of the studio’s co-founders, Ken Pratt, about the team’s experience at EA prior to striking out on their own. For all the anger that the company generates from the gaming community, EA’s size and scale means that it is an amazing breeding ground for talent, and so many great indies, including this one, would not have come together were it not for EA. We also discussed the challenges of being an indie studio and going up against the big guns off the industry, and the challenges inherent with creating a free-to-play game, and balancing the need to make money with the potential fall out from dissatisfied customers who feel like they’re being charged too much for a “free” experience.

Digitally Downloaded (DD): What inspired you to leave EA to start up an indie studio?
Ken Pratt (KP): Our original inspiration with Atomic Brawl was to create a mix of tactics and CCG (collectible card game) that didn’t exist yet. Basically, we wanted to play this game bad enough that we built it ourselves. We knew that we couldn’t realistically pursue that vision within EA. It’s extremely hard to develop your own ideas within the company, and basically impossible to get approval to create a game as a side project or have the free time to pull it off. We’d both been at EA for a number of years at that point, and were considering heading out to smaller companies, so we made the plunge. Another nice thing was that our new day jobs were outside the gaming industry, and had more normal working hours, leaving more evening and weekend time to launch Atomic Brawl. 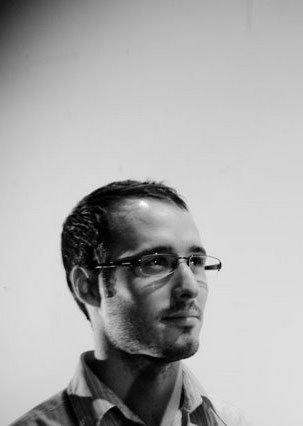 DD: And, further to question 1, what encouraged you to take on some of the biggest developers with a CCG card-style game?
KP: Dumb luck! For the first couple years we were building it, no big developers had announced any plans to create digital CCGs. It wasn’t until we were partway through development that we heard about Blizzard’s HearthStone team, and games from other high-profile teams such as Mojang and Cryptozoic and StoneBlade. Once those projects were announced, it spurned us on even more to get this game out the door.

We’re actually happy that we have so many competitors. It’s much easier to get people to try your game when they’re familiar with the genre than if it’s completely out of the blue. Another nice thing is that despite this wave of digital CCGs, we’re the only ones who combined a tactics gameplay experience with a CCG. They’re all more traditional card-based combat, or lane-based combat CCGs.

DD: There’s been a lot of debate around free-to-play models. How are you looking to earn a return from your work while not annoying your players with microtransactions?
KP: We had a really hard time with the decision to be free-to-play (and wrote a little more on our approach here: http://blog.atomicbrawl.com/blog/2014/01/25/its-hard-to-sell-free/). I don’t think anything other than free-to-play makes sense for a collectible card game, although most of our competitors lock off most of their content to paying players only. We weren’t comfortable with charging a fixed price, as we worried about getting enough players that way, but also weren’t comfortable with model with locked-off cards for pay only, as we were sick of pay-to-win games. We’re hoping that players enjoy the game enough to sign up for a subscription (which gets you some bonus cards from each game). So far we’ve been happy with the number of people who’ve chosen to support us — now we just need more players!

DD: What plans do you have for this game in the medium to long term?
KP: Right now, we’re focusing on getting the game in as many players’ hands as possible. We’d also like to create a proper tournament system (right now players are organizing informal tournaments on the forums), create more cards in expansion packs, and introduce new game mechanics (possibly including varied maps).

DD: Are there any other games that you have in mind, and what are your long term goals for your business?
KP: We’d like to keep growing Atomic Brawl. There’s limitless potential in new mechanics and new cards. Look at Magic: The Gathering: it was released over 20 years ago, but the expansions keep getting better and better, and the game is more popular than ever. So that’s where we’d like to be, long-term. 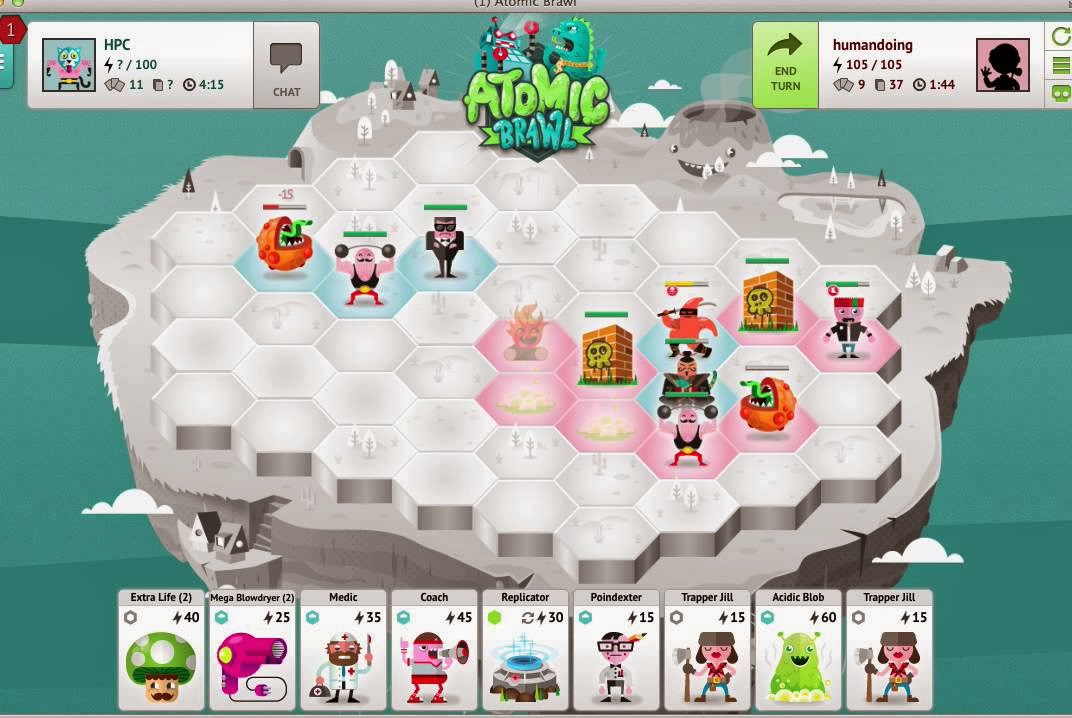 DD: You have a very distinctive, cheerful art style in the game. Where did the art style come from, and what impact do you think that will have on your potential audience?
KP: Deciding on a theme was a huge struggle for us. It would have been an easy decision to go a traditional high fantasy or sci-fi route, or something else that has be done thousands of times before. We wanted to do something fresh, though. We actually drew inspiration from a game that we were huge fans of as kids – Earthbound (Mother 2). I would describe our theme as “modern day turned on it’s head” – we have objects and characters from everything you can think of. We then took this theme and tried to produce art that was also unique but consistent. We think this broad appeal has really helped us attract a wider audience than a game of this type would typically draw. We have plenty of players who have never played a game in this genre before and are having a great time.

DD: Why develop a browser game, rather than a dedicated app or download game? Does it concern you that people will need to proactively visit the game’s site, rather than simply open up the game from their desktop?
KP: This was an intentional decision for us, and I would argue it’s a huge benefit. For many people, your browser never gets closed. You’ll often have numerous tabs open at any one time, regardless of what you’re using your computer for. Because Atomic Brawl is played in a browser, you can keep it open while you’re doing other things; take turns when you have a free moment, or perhaps take a break more easily from that paper you’re writing or the spreadsheet you’re struggling with. Our aim with this approach is really to bring the modern day workplace to it’s knees with our targeted attack on productivity.

DD: How did your experience at EA help with developing your own games?
KP: EA, despite its reputation in the industry, was a great place to work. It really taught us what it meant to crunch on a project and also showcased a lot of what the typical life cycle of a game in development looks like, and also, just how atypical it can be at times. EA also showcased the importance of hiring the right people. On our team in particular we spent a TON of time hiring but in doing so our teams ability to meet deadlines and work together really helped us when it mattered.

DD: What advice would you offer to something looking to start up an indie development studio?
KP: I would say find people who you’ve worked with before and know you work along side well with. Nothing is worse than getting stuck on a project you’re passionate about with a partner you can’t stand or be super honest with (or fight well with :P). Other than that, build something that you want to play (but doesn’t exist yet) and are passionate about. Basically, be excited about your idea and who you’re working with. If you don’t already have a partner and/or experience creating games, attend a game jam or two!

UPDATED: Nintendo outlines its strategy to resolve its business challenges

Kickstarter update: The book is successful!