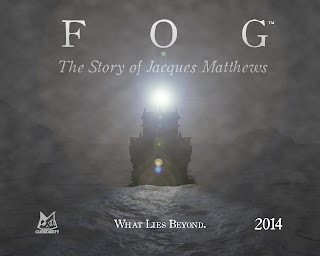 Over the past couple of years, the indie gaming scene has given rise to a handful of psychological adventure titles, and Torquay-based Curiosity Studios is stepping into the ring with its newest (and first) title, FOG.

FOG: The Story of Jacques Matthews follows the titular fisherman, as he finds himself stranded on a deserted island covered in a blinding fog. Not long after, he befriends a mysterious girl, who claims she can guide him through the constantly shifting island. Armed with his wits and fading sanity, Jacques must use light to traverse the unknown, rescue his fellow crew members, and unlock the secrets of the island.

Along with a bold visual style (which you can see in the game’s trailer below), FOG differs from most psychological adventure titles by presenting players with randomly generated playthroughs, providing new visuals, sounds, level placement, and story events with every new playthrough.

FOG: The Story of Jacques Matthews is set to release on PC and Mac in 2014.