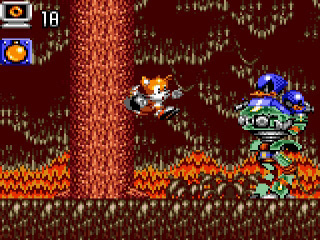 As much as I enjoy Sonic’s 2D platforming outings, they all share a particular similitude. If Tails Adventure (and please note, this isn’t a grammar fail on our part, the game really isn’t called “Tales’ Adventure” like it should be – ed) is any indicator, though, that sameness may be a lynchpin upholding their general level of quality. Tails Adventure tosses many Sonic clichés and design choices to the wolves seemingly to be more alluring to fans of more methodical exploration.

Unconventional or not though, its take on the 2D platformer falls flat enough that fans of either gameplay style won’t find much left to appreciate.

Rather than explore stages at the speed of sound, Tails plods along through a dozen fairly open-ended levels. In addition to the twin-tailed fox’s usual arsenal of tricks such as flying, he’s got a whole arsenal of gadgets. It’s a fine effort to stay true to his character considering the lack of material to work with. Most tools are used for solving puzzles but there’s quite a variety amongst them. One of your overarching goals is to collect all of these trinkets as they allow you to access secrets and progress the through the levels.

Alas, the items are also where Tails Adventure stumbles first. The number of them you can take into a particular stage is decidedly limited and if you aren’t omnipotent enough to ascertain which doodad you need in advance, you’ll have to exit the entire level. As much as some will malign the usage of trial and error in titles such as Mega Man, it’s positively crippling to the experience by comparison here. Having to return to the map screen when you discover you’re unprepared for the level in question is tedious, neither enhancing the player’s skill nor truly promoting discovery. Factor in the tardy movement of Tails and any excitement becomes more akin to a chore. 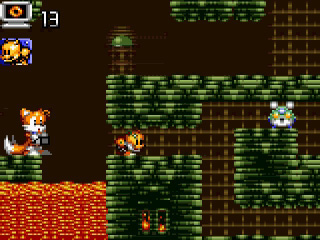 The level design itself also leaves something to be desired. Though it is decidedly superior to many of Aspect’s other Game Gear titles, presumably due to the slower pace, there are many rough patches and obnoxious leaps of faith required. Passageways are needlessly tight, condemning Tails’s main means of attacking – a bomb with an awkward arcing motion – to get snagged on the ceiling constantly.
The need to revisit stages again to collect previously unobtainable items also exposes the obnoxious sections all the more. I would have readily sacrificed the amount of items simply to avoid traversing the same bland stages again in an effort to discover missing tools.
Yet for all the lousy implementation of inventive ideas, Tails Adventure still stands out amongst many other platformers on the eShop. The items are interesting to use, with one particularly imaginative one enabling you to explore great portions of the level using a remote control robot. Even the superfluous additions have a certain charm to them that may entice players to seek them all out.
There are even a few peculiar instances where it seems the developers understood their own obtuse level design, as minor decisions like allowing Tails to lose a defined number of rings when hit rather than all of them like in the regular Sonic games suit the game’s artificial challenge. There’s also a great deal of variety in the stages themselves, which certainly encourages the type of exploration the developers were going for. If the core game wasn’t so littered with theoretical and observable design faults that actively hamper the player’s experience it would almostbe pleasant.
Tails Adventure is less a game to be played for enjoyment and more of a quirky curiosity buy for fans of the blue blur. There are fresh ideas here, some of which were impressively ahead of the genre at the time, but most players today are unlikely to appreciate fine details long past their relevance.