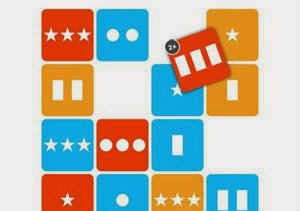 Recently I succumbed to the advertising on several of the Podcasts I listen to and started playing Lumosity. It’s a good app, a little restricted for people who don’t want to buy a yearly subscription, but overall pretty good. Basically the idea is brain training by giving you a random assortment of games every day and you have to beat your previously highest score. Loading up Shape Jam, it feels like you are playing just one Lumosity game but with the added twist of playing against someone online.

Effectively, the game consists of blocks of three colours, with three different shapes (a rectangle, circle and star) and either one, two or three on each. The aim of the game is to find as many matches, sequences or different variations of the tiles as possible in 60 seconds. If you wipe out a block, you get a new one and the aim is to score more points than your opponent. Being an online competitive game, it’s all about the high scores. However the simplicity of this game is its downfall. 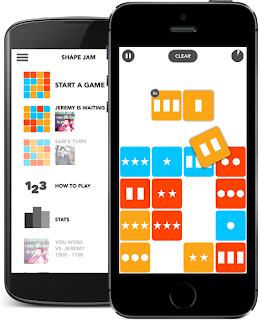 Loading up this game, I felt that I had seen everything that Space Jam offers within five games. Initially, it’s the learning curve that hooks you and I for one looked forward to a learning curve that would drive me on to become an expert. However, quickly you realise that the initial impression is it for the game. Once you feel confident about the basics, then the sense that there’s room to improve ceases. The racing aspect doesn’t even feel especially tense because the developers don’t put scores on the screen until the end of the game. Actually, the online competition of the game is one of the weakest aspects of it. I quite like when games offer the chance to build onto your own or a list of friends’ high score list and the kind of passive competition that this game was going for just doesn’t quite ring through.

What really makes the experience less than satisfying is the lack of gameplay modes and diversity of the experience. There just isn’t enough to keep the game interesting. Many games are simple, but they will compensate with a ramping difficulty option or plenty of player customisation. Here it’s like playing a really old version of Tetris for all the variety it offers. In terms of game design, the designers have done a good job. The gameplay is clean and works well and looks quite good.I think again of the types of games that Lumosity offer. They are simple and you might feel like you end up playing the same games all the time but the call to action to play for 5-10 minutes a day is enough that they feel fresh.

That said the developers have done a decent job of making a well-functioning time waster and perhaps my experience was different to others. The game features too-simple concepts at work, but if you get hooked then you’ll enjoy the competitive nature of the game. Sadly, I didn’t get the same in Shape Jam. When I won a race, I didn’t feel happy. When I lost a race, I didn’t feel the need to come back and win. Sadly the biggest feeling I got with this game was one of complete apathy. Most developers would likely prefer that you completely love a game or, alternatively, completely hate as at least you have a strong opinion, even in the casual gaming market. Unfortunately, Shape Jam falls straight in the middle.