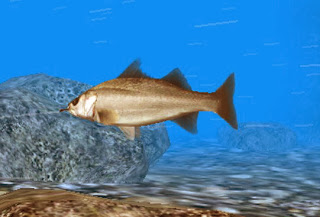 Most fishing games fall into one of two categories. On one side there are sport fishing games, which take liberties from reality to ramp up the excitement of fishing by adding time limits and high scores to chase. On the other side of the spectrum are recreational fishing games, which forgo any arcade-inspired bells and whistles to deliver an authentic fishing experience which is more relaxing than stressful. If you’d assume Natsume, developer of the Harvest Moon series, to be more interested in a recreational fishing title, you’d be right – Reel Fishing Paradise 3D clearly aims to have its players feeling comfortable, although it doesn’t quite seize your attention either.

The core fishing experience in this game is admittedly quite solid. Like most fishing games, the core mechanic is the line tension meter when reeling in a fish: reel too vigorously and the line will break, while being slack will allow the hooked fish to free itself. Players can opt to use stylus controls which have them drawing circles to simulate reeling, or simply press the face buttons which reel the line in set speeds. Both options feel natural and responsive. Additionally, Reel Fishing Paradise allows players to jerk the rod by moving the circle pad, reducing tension if the rod is moved in the same direction the fish is swimming. Unfortunately there are no line length or fish strength meters, forcing players to rely on guesswork with some critical statistics and details rather than strategising their pulls.

Reel Fishing 3D Paradise also boasts a wealth of different fish to catch, although keeping in key with its recreational scope results in most of them being relatively mundane. Rather than sharks or blue marlins, Natsume offers six different kinds of trout among other assortments of common river and ocean fish. There is also an incredibly vast variety of bait and tackle to choose from, with each species of fish having different preferences. Although the game offers bait, lure and fly fishing, the difference is not distinguished clearly through gameplay so the overall experience is the same. 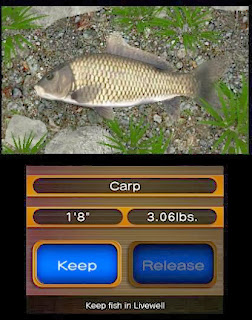 Despite its robust engine and wealth of content, Reel Fishing 3D is greatly let down by its pacing. The game is split into fifteen different locations, each home to 2-6 species of fish. Each day, the lodge owner will give you a mission to catch a certain species, and this is the only way to progress through the locations. Some missions also force you to catch the same fish as the previous one, albeit of a larger size. New species of fish don’t even spawn until the lodge owner informs you of their existence, which completely robs the player of any sense of exploration or freedom. It’s an obtuse system which certainly pads out the game’s length (finishing all the missions will take a good 8-10 hours) but leaves it feeling dry and empty.

Graphically, Reel Fishing 3D is passable. Most of the fish models are detailed and look realistic, although there is a huge disparity between the good and the bad. The same can be said for the terrain textures, which leaves the final product with a bizarre, messy look. The 3D effect is also quite bothersome as the camera follows along with a fish as it struggles, so the player will constantly have to refocus on a fast moving object. It’s a clear recipe for a headache, so it’s advisable to play this one in 2D. The camera also can’t be manipulated outside of zooming in and out, which makes it impossible to see fish which are directly behind it.

I do want to mention however that the music is surprisingly excellent. The menu themes were so relaxing and quaint that I dawdled on them just to listen. Fast paced jazz also plays while reeling a fish in, creating a spectacle not unlike an overexcited nature documentary. This is definitely a game you’ll want to play with the sound on, as even the sound effects go a long distance to adding atmosphere.

While Reel Fishing Paradise 3D offers a fairly authentic fishing experience, it is held back by its lack of player freedom which makes gameplay feel like a chore. The final product feels padded and unengaging, which is a real shame because the underlying fishing mechanics are sound. With a decent variety of fishing games available on the eShop (including Natsume’s own Legend of The River King), Reel Fishing Paradise 3D is hard to recommend for anyone looking for a fun fishing experience.