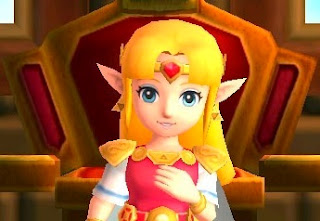 Until I had started playing The Legend Of Zelda: A Link Between Worlds, I had no interest in the game. Despite being obsessed with Zelda games as a child, the series has left me largely cold following the heights of Ocarina of Time.

Why has my relationship with the franchise waned in recent years? It’s been a combination of things, really; the love affair that the recent games have developed for unnecessary features like trains, boats, touch screen and motion control gimmicks are just the start. These features were supported by a formula that had become so familiar that I knew what was going to happen next in the game from the opening cut scene. Nintendo is a conservative company at the best of times but it seemed so uncomfortable with making even the slightest changes to the formula so perfectly defined by Ocarina of Time that the developers had clearly forgotten that a new game should offer something genuinely new.

Given how formulaic Zelda has become it must have felt terrifying for the developers of A Link Between Worlds to think about just how much they were breaking with a tradition firmly entrenched for the past few generations of consoles. Gone is the apparent desire to craft an epic narrative and give characters personality; this is a game that scales Link back to an empty shell of a character that like with the early era Zelda games players engage their imagination to create their own personality for the green hatted hero. It couldn’t have been a better decision. Liberated from clunky plotting and the challenge of giving a voiceless hero a definite personality, A Link Between Worlds is ironically the most compelling story a Zelda game has told in quite some time. Back when I was studying narrative and creative writing at University I was always taught that a good author shows, but doesn’t tell. This game is proof of that. The less that is made immediately obvious to the player the more their intrigue will be piqued. 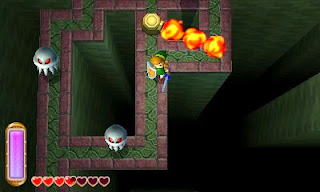 A Link Between World realises this perfectly. The Dark World is a thing of beautiful mystery. The environments themselves are designed in such a way that inspires curiosity. The history of the game’s world and the back story to the previous game are never made too obvious, leaving players to puzzle things out for themselves. Around every corner this subtle plotting encourages and demands players think for themselves, and this in turn means that players are more personally connected into what is going on.

Gone too is the appetite for unnecessary hardware-based gimmicks. Skyward Sword annoyed me because the motion control was unnecessary. The DS Zelda games annoyed me because the touch screen controls were unnecessary. A Link Between Worlds sits on the 3DS and the immediate assumption based on Zelda’s recent history is that the game would have felt the need to use the 3D in a way. But, almost in a deliberate denial of gimmickry, A Link Between Worlds plays out in a very traditional top-down perspective; a view into a world that renders the 3D effect almost indiscernible. Then when Link shifts into the walls in the one new gameplay element to this title (his ability to turn into a moving painting), it’s like the developers are having a knowing joke about player’s expectations with the Zelda franchise – what better way to shelve any expectations of 3D than by locking one of the most visually impressive sections of the game to 2D plane? There was one time I played for a half hour or longer without actually realising that the 3D slider was off, and that’s never happened to me in any 3DS game before. 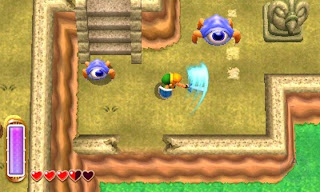 This game design restraint has extended through to the game’s structure too. Where other recent Zelda games have become indulgent in channeling players from one dungeon with carefully constructed puzzles around a specific item that can only be found in that dungeon to the next, A Link Between Worlds resists such a prescriptive experience. Here instead players are encouraged to explore the world and tackle challenges at their own pace, as they discover them, with materials that are readily available. It’s not a non-linear open world experience by any means, but for the first time in a very long time A Link Between Worlds has managed to capture something that I had thought lost; the sense of wonderment and discovery born by the simple fact that you’re not forced along a single path with the most superficial of decisions breaking things up.

It means that it’s possible for players to get stuck or lost. And players that do get stuck or lost are liable to get frustrated. But by the same token, finally figuring out a room’s puzzle or figuring out how to reach that “impossible” treasure chest comes with it a sense of achievement that is both genuine and that much more rewarding when it doesn’t feel like the game is holding your hand right through to the solution. Like the classic Zelda games of yore, “winning” this one feels like a genuine achievement, whereas with other recent Zelda games I’ve merely had the “oh, that’s nice” response. 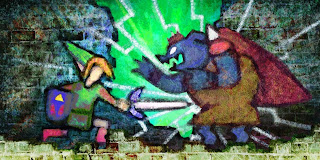 Because of its elegant simplicity, A Link Between Worlds legitimately feels like a sequel to the SNES classic A Link To The Past; no small feat given how old that game is, and in doing so there’s a wonderful sense of nostalgia built over the top of what is in practice a fairly modern game. Stylishly detailed visuals and remixed classic Zelda tunes mix with clean analogue movement and a touch-screen enhanced inventory that makes playing the game that much easier.

A Link Between Worlds feels very much like the cumulation of everything that the Zelda series has ever aspired to be. It’s a game that deserves to be held up a text book case study for precisely why a franchise, when taken back to its very roots, can be easily more compelling than taking that same formula and stretching it to places that take the focus away from what made it special in the first place.