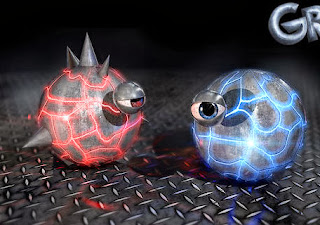 Review by Michael B.

Before I go onto the review proper, I want to point out two things. Firstly, I was never able to get Gravi to run in Steam’s Offline Mode. This was tested on both a laptop and a dedicated gaming desktop. I have contacted the developer Hashbang Games about this issue and it seems that this is an unintentional bug, but as of writing this review it has still not been addressed.

In my relatively short time reviewing games, I have come across a peculiar type of game which I like to call the, “Obstacle Course Gauntlet.” These games, most often belonging to the platformering puzzle genre, have a clear focus on overcoming various obstacles and environments using a limited range of abilities. Where these types of games differ from other games from both the platformer and puzzle genres is that the gauntlet of levels or enemies or whatever has clearly had the most work put into it. More often than not the game mechanics will be unrefined, the graphics will be unpolished, and everything aside from the challenges and level design will be quite underwhelming. Now, this is not to say that all obstacle course gauntlet games are immediately bad, but rather that it is rare to see one that is good. 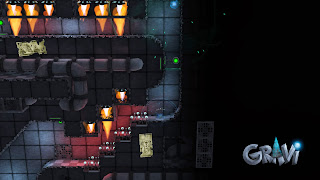 Gravi is an obstacle course gauntlet game. Unfortunately, Gravi is not an exception to the rule. The gameplay is unrefined, the graphics are unpolished, and everything else is almost entirely unremarkable.
The main gameplay element of Gravi can be summed up as magnetism. From what can be gathered of promotional materials, you play as a object called Gravi, who is trying to escape a laboratory. Aside from rolling to the right and rolling to the left, Gravi can shoot out energy. Firing a large amount of energy and making it stick to a surface will result in a gravity hook-esque effect that allows the player to swing over objects and traverse upwards. Shooting out a small amount of energy allows for objects caught in magnetic fields to drag each other and reduces the size of Gravi, allowing the player to enter small passages. There are the standard set of hazards and several environmental mechanics that are ultimately unoriginal and overall the game is not the most rich experience.
This lack of variety does not help as the mechanics in the game are unfortunately not refined to a state of excellence. Yes, the mechanics are fully functional, but there are still odd quirks in the systems. Gravity-altering obstacles interfere with the gravity hook shot ability and result in a jittering player position, bumping into the corners of traps can make Gravi become stuck in level geometry, and spike hit detection is either late and/or off. When there are no bugs or odd mechanical desynchronizations, the game is enjoyable. However, there are just too many points where I recognized the gameplay as an obstacle rather than the level itself. 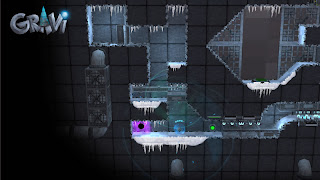 The level design is generally quite simple, with only some points in particular levels standing out to me. This is probably the most common problem with the genre; the obstacles usually aren’t memorable. While level creation partially has to do with creativity, a huge component of having good levels is that the mechanics are solid, which as I mentioned is not always the case with Gravi. It takes a lot of work to cover up mediocre mechanics and if I were given the assets and mechanics present in Gravi I would find the task of level creation to be extremely difficult. But alas, Gravi still is not able to cover up mechanical imperfection with level design.
The visual design of the game tends to interfere with the gameplay. Gravi does have some nice artwork, but the problem is that it can be difficult to distinguish what is a foreground area and what is part of level layout. Before my eyes became adjusted to seeing which objects were considered part of the level, I would occasionally bump into walls thinking they were part of the game. If you have good visual perception this will become less of a problem as the game goes on. For others, this may be the huge mark against the game. The audio design of the game is mostly forgettable.
Overall, Gravi is a typical obstacle course gauntlet game. The mechanics are unrefined to a point of being noticeable, the graphics are unpolished such that gameplay interference occurs, and everything else about the game is unremarkable. It is definitely possible to enjoy this game, but for those that like their games to be mechanically sound and adequately polished, Gravi is not meant for you.