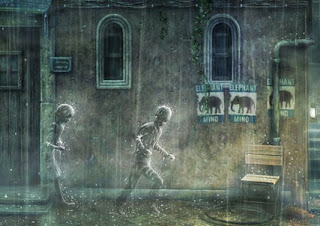 Melancholia can make for an oddly beautiful theme when done right. We’ve seen it work for poets such as T.S Eliot (“By sea-girls wreathed with seaweed red and brown/ Till human voices wake us, and we drown” – The Love Song of J. Alfred Prufrock is truly a masterpiece), we’ve seen it work to great effect in paintings, in music, in film. For instance, if you haven’t yet seen Mirrormask then I urge you to do so. It’s spectacular.

These works all contain some very dark material, of course. Melancholia is, after all, depression, but when freed from violence and anger a work that is focused around the theme is subtle, reflective, and often quite peaceful. Freeing a work from violence and anger is a monumental challenge in the games industry, which profits almost exclusively off a combination of those two themes, but that’s precisely what Rain has done, and that’s precisely why Rain is such a special game. 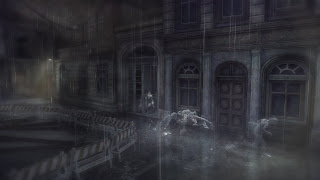 The ever-present rain that the game takes its title from is Rain’s most interesting quirk. On a purely mechanical level it creates an interesting new way to offer puzzles for the player to navigate through. At its core Rain is a stalker horror game where the player is defenseless to overcome the monsters (think Clock Tower games, or Haunting Ground), and so much sneak around or avoid them completely. The quirk here is that the player is only visible when standing in the rain. When under a ceiling he is no longer visible. It’s a remarkably simple but clever way of creating hiding sports for players that don’t feel as contrived as they can in many games of this genre. But don’t go feeling like you’re too safe – the entire city that Rain takes place in is a desolate wasteland where ceilings are few and far between.

But on a thematic level the rain of Rain is far more compelling than the interesting puzzles that it gives players to work through. Rainfall has regularly been used by authors or artists as a motif to describe a cleansing experience; it literally washes away the dirt or blood or tears, and it metaphorically washing away sins, or innocence, or either happiness or misery (depending on the tone of the piece, of course). Here, in this game, it quite simply reveals the player, and the only time that the player will ever have a tangible connection with their avatar is when they are being cleansed. Monsters, likewise, are invisible when not being washed by the rain. Rain’s rainfall is an exposing agent, it reveals the truth about the world and the creatures within it, and given how players are controlling a defenceless (and typically cowering) young boy, that truth can often be quite confronting. 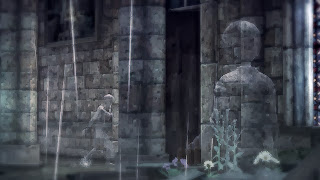 For such a primal force to be the only measure of truth amongst a decaying urban environment is a powerful theme, and one that the Sony’s C.A.M.P team (the developers of the game) previously explored in Tokyo Jungle. They didn’t do such a good job of presenting the theme in a compelling manner in Tokyo Jungle, but in Rain the developers have nailed it. Players quickly learn that the human-built world is one of uncertainty and misery, while the calming power of rainfall is salvation. From the tattered posters in the background to the remnants of happier times that are left lying around, there is very little in this human city that hasn’t been destroyed by the persistent rainfall.

The other side to Rain is the intense loneliness that it evokes as the player explores the dilapidated buildings and cobbled streets. The gently repetitive sound of the endless rain, mixed the cold colour palette, coupled with the complete absence of life create an alien and inhospitable environment. The musical soundtrack is sparse and subtly used to highlight important moments of the poetic narrative, but the fact that none of the games’ characters talk works to enhance this lonely experience. For the most part, it’s literally the sound of invisible footprints in the rain. 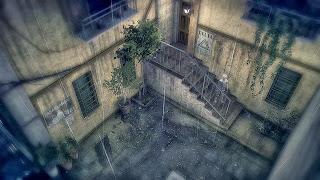 Another oddity for the game’s industry is just how ineffective the ‘hero’ of the tale is. He’s a ghostly boy chasing after a ghostly, indefinite girl through streets inhabited by creatures that will all kill him with a single hit. This is a tale of characters to be pitied, not envied, which slots in perfectly with the melancholic tone of the title, but I suspect sadly seals the game’s fate as a “weird title” that people will find unappealing because they’d rather be slaughtering millions while in command of a beefcake or heaving chest woman.

Unable to fight back the boy’s only avenue for survival is to run and hide, or on a rare occasion lure an enemy into a trap. The intensity of these chase sequences, compounded by the claustrophobia of small environments and the unknown mystery of what, precisely, is going on are fairly standard genre tropes for stalker horror games, and Rain is at its best when it’s not trying to be a game. With every death, respawn and enemy following the exact same pattern that it did previously the immersion within the world is disrupted. In fact, the game generally loses its tension once you realise that if the monster does get you, the checkpoint system is so generous that you’ll only be dropped back a few seconds of play. 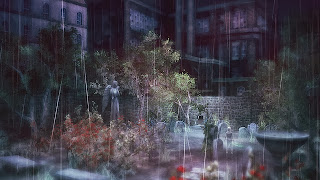 It becomes too easy to start seeing these characters and their environments as mechanical tools to be utilised in the pursuit of the next objective, and when that happens the emotional impact of certain scenes (and there are some whoppers in there) sadly loses some of its impact. Say what you like about David Cage’s work but he understands that sometimes, just sometimes, a game is actually doing itself a disservice by being too ‘gamey’. Rain generally struggles to provide a compelling gameplay experience underneath its breathtaking theme. The difference between Rain and something like Beyond: Two Souls is that the developers of Rain thought it would be a good idea to try create something that would readily fit within the standard expectations of a game, and in doing so they’ve actually hurt the artistic credibility of what they’ve created.

It’s not the longest game either; two solid evenings of play (with a glass of red wine to set the mood, naturally), and you’ll be able to work through the eight chapters. The experience is also very linear which hurts its replay value. Inevitably some players will jump up and complain about not getting value for money or some such (even though it’s a cheap game from the outset), but were Rain to be any longer its themes would start to drag. A bit like poetry, really, it’s a rare example indeed that can maintain the reader’s interest for hours on end. The theme of Rain is also dense and emotionally draining, so there’s only so long you can play something like that before you need to go frolic in a field of flowers just to cheer yourself back up. With that in mind Rain is perfectly paced and for anyone that enjoys their games with some real meat to the themes, here’s something quite genuinely inspirational.

Hands on with Killzone Shadow Fall; Nope, this didn’t do it for me at all

Deadly Premonition Visual Companion; I want more games to have these