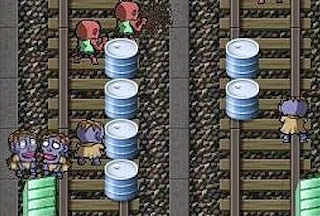 I would be impressed if I met anyone who had managed to completely avoid zombie games, books and films. Over the past decade, zombies have gone from African/ Haitian reanimated corpse (depending on which mythology you choose to believe is the genesis for the zombie) to horror monster to an apocalyptic force in media, especially in the world of video games.

Some of the most popular games are either based on zombies or include hugely popular zombie-based modes. While there can be (and in fact are) pages upon pages as to why zombies are so appealing from creator and audience perspectives (for the tl;dr version it’s because it’s easier to program AI for a zombie than a human being), it is far easier to say that we’re stuck with zombies. They’re not going anywhere. 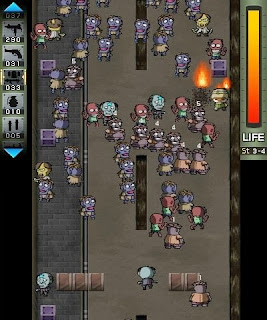 Jumping into the zombie video game scene is Tom Create Co. with Escape from Zombie City. This game marks Tom Create Co.’s departure from its licensed SD Gundam Generation G game series and the company’s first noticeable foray into original IP creation. I am always a supporter of developers creating original video games, so I immediately was on board for reviewing this title when I learned of it. I figured that despite a bland subject matter, the underlying game would be entertaining or at the very least tolerable, with my reasoning being that Tom Create is a studio with over a decade of video game development under its belt.

To my surprise, both of my predictions were right; Escape from Zombie City is a tolerably enjoyable game.

Escape from Zombie City from a mechanical standpoint is essentially a twin-stick shooter without two thumb sticks. The player is able to move their character in a 360 degree range and shoot a variety of different weapons. Holding the ‘L’ button locks the character in place, allowing for more precise aiming without navigational missteps. Killing zombies and rescuing civilians both count towards completing a level objective and getting a larger high score, both of which are purely aesthetic in the larger design of the game. 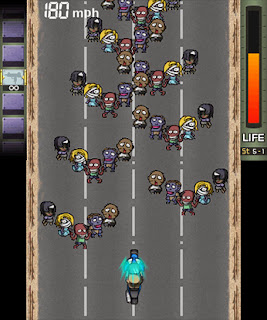 It appears that Tom Create Co. decided to lean more towards survival than a straight-up arcade experience with Escape from Zombie City. While the gameplay is very reminiscent of titles more associated with high scores, the overall weapon scarcity and level design of the game indicate differently. The game also contains a timer that counts down to when nuclear bombs will strike. When depleted, it’s game over.

If Tom Create Co. showed an unwavering focus on survival, then Escape from Zombie City would overall suffer for it as the simple mechanics would become tedious quickly. However, there are some arcade sensibilities also lingering in the game. Laying waste to zombies is enjoyable when properly equipped with some of the slightly overpowered weapons in the game. Several of the bosses in the later areas seem more common with 2D shooter bosses, at least in terms of difficulty. The visual design and comedic dialogue are more fitting for a relaxed game. It’s an odd clash, but it arguably saves the game from consuming players with boredom.

Overall, Escape from Zombie City is a somewhat dull concept that is saved by its arcade sensibilities. It is a game that definitely is at odds with itself, but as such it becomes much more interesting and entertaining. For those eager to play something worth analyzing a tad, I can confidently recommend this game. For those looking for a good time, I can only say that Escape from Zombie City is a mixed bag.