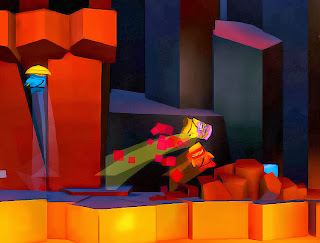 If there’s one thing I lament about owning a PS3, it’s the lack of party games that the system has to offer. Sure, there’s the long-running Buzz! games, and the upcoming Sportsfriends is sure to be a blast, but there aren’t many options if you want to round up a group of friends and enjoy a night of beating each other into a bloody (virtual) pulp (you did forget PlayStation All Stars Battle Royale, dude – ed).

That’s where Atomic Ninjas comes in.

Grip Games’ newest outing can be downright bombastic at times, combining the frantic fight-or-flight gameplay of the Super Smash Bros. series with a colourful and vibrant post-apocalyptic world. If that last part threw you off, don’t worry; this isn’t a deep and meaningful game it’s just due to the game’s quirky setup. After a patrolman accidentally presses a “big red button”, Earth is plunged into chaos as nuclear weapons rain down from the sky. Of course, this is not a bad thing in the world of Atomic Ninjas. The titular characters survive the ensuing destruction, and emerge as near-invulnerable, agile fighters. The premise is simple, but it sets the stage for a frenzied brawler set across a handful of stages. 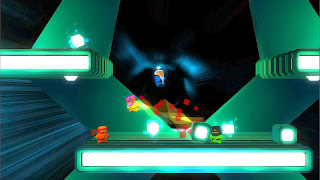 After a quick tutorial at the Ninja Academy, you’ll be ready to take part in battles, against computer-controlled bots, or against more human rivals, either locally or online. Like Nintendo’s flagship fighting game, endlessly wailing on your opponent won’t do much; in order to take out the rival ninjas, you most send (or lure) them into any number of environmental traps. Fire, laser beams, electricity and other pitfalls are littered throughout each stage, and you’ll require deft platforming and combat skills to maneuver around. Granted, if you’re lucky, your opponents might simply eliminate themselves, assuming they aren’t paying much attention to what’s around them.

It’s a welcome departure from most fighter games, which often rely on static stages and a lack of maneuverability. Apart from your natural jumping abilities, there are a handful of gadgets you can pick up around each stage to help you get around more quickly, from ninja ropes which let you swing on walls, to a rocket you can strap on like a backpack and ride around. And of course, there are weapons. While you can hold your ground with old-school fisticuffs and shurikens, picking up the many crates strewn around the arena and launching them at other fighters proves both effective, and often hilarious. It all comes together to create an experience that’s equal parts intense and hilarious, and optional Ninja Trials that are announced prior to a match starting provide incentives to complete them, as you’ll unlock new abilities and characters. 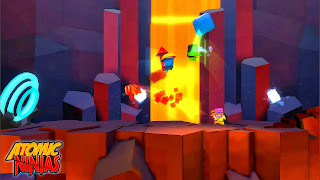 Still, amidst all of its colourful and explosive displays of ninja-on-ninja combat, it’s worth pointing out that Atomic Ninjas heavily relies on your ability to play alongside friends and online opponents. While the game can be enjoyed as a solo affair alongside bots, the novelty quickly wears thin, as the virtual enemies are no substitute for live, human opponents. As much fun as I had actually playing Atomic Ninjas, I had just as much fun watching a few friends duke it out amongst themselves – it’s an experience that is largely shaped by the kinds of people you play games with.

Yet despite its dependence on multiplayer, it’s easy enough to recommend Atomic Ninjas, especially with its low price and Cross Buy/Save/Play support. Even without a proper single-player story, it’s still very much worth playing, especially if you can rope in a few friends for the ride.