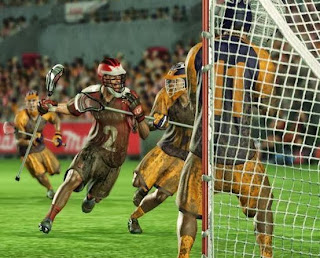 Big Ant Studios, the developer behind many sporting adaptations on consoles, including AFL Live and Rugby League Live, is working with Crosse Studios to release a lacrosse game.

Let’s just start by pointing out how insane it is for an Australian developer to be working on lacrosse. You’re lucky if you even meet a person in the country that has watched a lacrosse game, let alone played one. I’m sure it’s a very fine sport, but Australian developers could be better spending their time working on sports Australians care about, methinks.

In fairness to Big Ant, it is working on a cricket game, and it looks like a pretty fine title at that, but given the trouble that another developer has encountered in getting a cricket game actually released (and now would be the ideal time to release one to capitalise on the Australian and Indian cricket seasons), we’ll believe Big Ant’s game when we see it.

Anyway, back to Lacrosse 14. This is to be a Kickstarter-funded title, and in a neat twist people who invest in the game in that way will get to have their name and face included in it. For Australians that’s a neat idea, since it’s really unlikely any of the licensed players (if there are licensed players) will be names anyone down here recognises.

The game will be released on PS3, Xbox 360 and PC and will ship in 2014. After the next generation of consoles have released. So, if you’re a big fan of the sport of lacross, don’t go throwing out those old consoles just yet.

Kickstarter is formally live in Australia