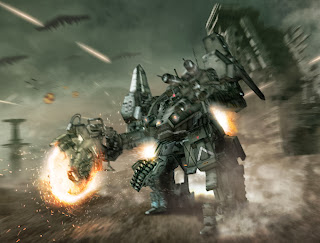 Before Verdict Day, I had never played an Armored Core game. So picture, if you will, someone whose first experience of a game is a bunch of prompts to import a character from Armored Core 5, then set up a character because I selected ‘no.’

Then I had to wade through all kinds of news from the Armored Core 5 world (all of which assumed some kind of knowledge of the previous game and failed to make much sense to me), and I needed to explore each and every menu to try and figure out what each meant because there were no tutorials of any kind to explain what is going on. I customised my mech without really knowing what I was doing to it, and then, being unwilling to get into the multiplayer for fear of my last 20 minutes of customisation embarrassing me, I went to what seemed like the least important part of the menu – the single player game, to play my first mission.

It’s safe to say that Verdict Day is not very accessible. I’m still not sure I completely understand everything that goes on in this game. But bit by bit the rewards for perseverance reveal themselves. This is a fast-paced but highly tactical action team-based action game and while it might be unforgiving, doing well in a combat is a satisfactory vindication of your skill level, as well as a deep understanding on the strategy involved in building the ideal mech to match your play style. It sometimes takes a game like this to realise just how rare it is for a game to be truly reliant on player skill for success, and ultimately I’m thankful to each and every game that does it. 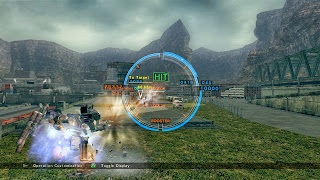 Does this setup sound a little like some of your other favourite games, like for instance Dark Souls? That’s not surprising since the game comes from none other than From Software, the developer of Dark Souls. Games that are inaccessible but ultimately rewarding are clearly the bread and butter for this team. And I suspect Verdict Day will appeal to the same people as a result. Hear that, Souls fans? Consider this game if you haven’t already!

Battles are skirmish size – just a couple on each side in a small arena, but the sheer range of available weapon combinations and equipment to stick on the robot provides for a truly staggering variety with how how those skirmishes play out. It doesn’t really matter whether you choose to play as a hulking tank or nimble scout in Armored Core; you’re going to need to practice, but you’ll be able to earn respect with whatever your preferred play style is. And it’s worth noting that the real meat of this game is found outside of battle. It’s incredible just how much can be customised on the mech, and how many different kinds of designs are possible within the game’s structure. I’ve had success walking into battle with nothing but a melee weapon and light armour plating because then my rig was so lightweight that the others had trouble keeping up. But every so often I would come up against the perfect counter – someone who carried a load of area of effect weaponry that could compensate for his inability to precisely target me. But that person would go down to a well-armoured gunner that could shrug off the scattered and individually weak damage output of area of effect attacks. 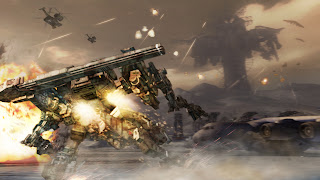 Players only get the one chance in each skirmish – a death is game over for that scenario, and this leads to some incredibly tense situations. I’d go as far to argue that there isn’t a single other game out there that I’ve come across where everything is so carefully balanced as to be both deeply exciting and deeply intelligent.

As the hours wore on I found myself forming a strange connection with my mech. It was so customised that I never came across another player that looked or played quite like mine, and even though Armored Core isn’t the most attractive game out there, it’s impossible to deny that there’s a certain aesthetic consistency that becomes engaging over the longer term.

There’s an intriguing premise that had me coming back for more, too. Players join “clans” and then work together to win skirmishes and achieve fame for their clan. The core of this game is in fighting battles with others in the clan, and this is a problem; unfortunately this game is such a niche kind of experience that it’s nearly impossible to find yourself a robust, active team that has people you’d like to play with a lot. Thankfully it’s possible to also hire yourself out as a mercenary, and so you can still play the game, but From Software’s clear vision of giving people mech clubs to join is fun, but needed more raw numbers to be realised really effectively. 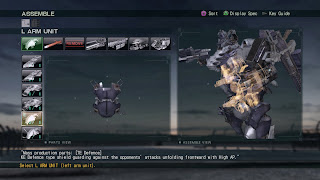 Being a regular mercenary I got a lot of loot from my campaigns, and that kept me buying more upgrades and tweaking my mech. Armored Core is the kind of game for people that enjoy menus broken up with short and sharp conflicts. Comparing it to conventional multiplayer action games (such as Call of Duty) is like comparing the appeal of a Football Manager game to something like FIFA 14 – the latter is more popular and entertaining for most, but for the small niche that get into the simulations and spreadsheets, Armored Core is incomparably rewarding.

And just like that I’m going to be sure to keep up with this series into the future. For I am the kind of person that enjoys min/ max gaming.