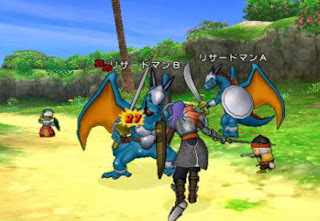 Dragon Quest X was initially a Nintendo Wii game. Then it was ported to the Wii U and PC. Now it’s being released on the iPad. Is this our best chance for the game to finally be localised in English?

For those who aren’t familiar with the game, Dragon Quest X is an MMO, and apparently a pretty decent one. Based on Square Enix’s most valuable JRPG franchise, it’s a deep game, but for whatever reason the company hasn’t seen fit to go through the localisation process.

But perhaps things will change now. Being available on PC and iPad, as well as the Wii U, means that there is a massive potential audience for the game in the West now, which might encourage Square Enix considering that previously the game was only available on a console at the end of its life and a floundering new one.


Square Enix might also be encouraged by the success of the rebooted Final Fantasy XIV. A Realm Reborn is a spectacular MMO by anyone’s standards, and was so popular that for a long time it was difficult for anyone to log in. Square Enix might interpret that as demand for Japanese-developed MMOs in the west.

And finally Square Enix might be encouraged by the scarcity of true MMOs on the iPad. Gameloft’s shameless clone of World of Warcraft aside, it’s a fairly untapped market and I wouldn’t be surprised to see the company try and capitalise on that.

But mostly I just want to play Dragon Quest X. So please indulge me, Square Enix.