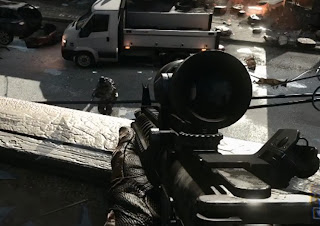 I’m sure it’s clear to most that know me that I love Battlefield. I absolutely suck at it, but there is a joy that I get out of playing it that I can’t find anywhere else. After getting some hands on time with it, Battlefield 4 is no exception.

The Battlefield 4 demo that was playable at the EB Expo 2013 was a 24-player match on Paracel Islands; four islands that are located somewhere in the middle of an ocean. I played the Obliteration game mode, which gave players the objective of carrying a bomb to three different points on a map. Destroy all three and you win. It felt like Rush, but more open, with little to no bottlenecks. While that might be good for 64-player games, having such a large area open with few players resulted in the game ending pretty quickly. It did feel at some times that EA and DICE are relying on all games to be filled to the 64 player spots to get the most enjoyment out of them.

Saying that, you could play multiplayer with any number of players and still be wowed by all the details they have put into it. In what is being called Levolution, all of the 10 multiplayer maps can all be controlled and manipulated by the player. In theory players will be able to take down an entire building for a strategic advantage, or flood a city to change the battle to one that is fought on water. However, because of what I played at the Expo, and also due to my inability to play a match on the open beta, Paracel Island’s main Levolution mechanic does feel like it has been designed to happen at around the same time in each and every match. I think back to Battlefield 3’s infamous Damavand Peak base jump. The first time you play the map, you’re in awe. Soon the awe wears off and it just becomes another thing that happens during a match. I can only hope that these big moments are random enough that they don’t start to feel like repetitive, forced ‘events’. 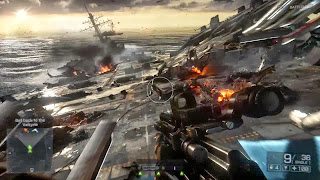 For me, the most interesting aspect of the Levolution is how it also affects the littlest things. There were none to be seen in the playable Paracel Islands demo, but the video that was played prior showed the power being cut to a room, then a player using a night-vision scope to take out the remaining players in the room. That’s what I’m getting excited about for Battlefield 4. It’s the small parts of the interactive environment that will allow you to take players out in tactical ways that makes me want to buy this game and never stop playing it.

I can’t talk about destruction without talking about the Frostbite Engine. Wow. Every single part of this game looked beautiful. And I cannot wait to see Battlefield 4 on both the Xbox One and the PS4, because no matter how much the PC fanatics will cry foul, this game will be incredible on both those consoles.

Until I played Battlefield 4, I looked at the map changing aspects of the multiplayer matches and I thought, that there was no real need to change Battlefields aside from the need to go where the players are. But after playing it, there are so many little details that have been put in that it feels like a completely different game.