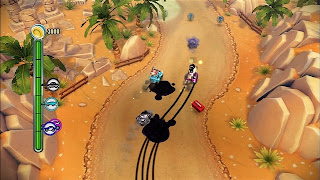 Making a standout top-down racing game is a difficult proposition now. It’s a mature genre without much room for innovation and there are no shortage of great games out for people keen on a Micro Machines clone.

TNT Racers is not a standout example of the genre. But it is good fun, and though it’s an old game now that you’ve probably played in some capacity somewhere else, it’s work a look if you’re still feeling starved for Wii U titles.

That is, assuming that you can pull together enough players for a round of local multiplayer. This game has no online multiplayer (though it does at least have online leaderboards), which is something of a problem but as every fan of the genre knows, the only way to experience top-down party racer games is locally. Especially when you consider that the AI of this particular game isn’t really up to scratch. While the opposition cars do a reasonable job of sticking to the racing curve, there’s no evidence that they can use the game’s weapons strategically, and it’s a little disappointing that it’s easy to beat the AI on even the most difficult level with a minimum of practice. Without regular multiplayer bouts, I can’t see this game paying for itself to Wii U owners. 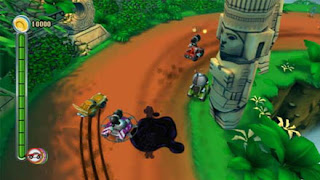 Local multiplayer isn’t a perfect experience either. TNT’s weapons are a fairly dry lot for a party game. They are undeniably effective at doing damage, but the tornadoes, oil spills, and a plunger that slows the target down lack the personality of other weapons-based racers like Mario Kart. That being said the weapon pick ups happen at such a rate through the tracks that the chaos they cause is delightful, especially with four human players taking on one another. Being rewarded for playing skilfully tends to go out the window in favour of spamming attack buttons, but in small bursts it’s great fun nonetheless.

The range of tracks are a little like the weapons – they check all the boxes for requirements in a party racers with a range of tracks of a range of difficulties and a few with effects like ice to spice things up. But by the same token, none of these tracks are memorable and they’re all small enough that it doesn’t really matter which one you pick, the tactics (spamming the attack button), won’t change. This is a stark contrast to a party racing game like, say, Mario Kart, where everyone who has ever played one of the games in the series has a favourite. 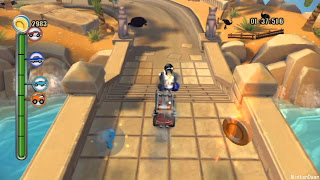 Unlike a regular racing game where the goal is to get to the end of a linear track or complete a number of laps the quickest, the default for TNT Racing is to score points by being the last one left on the track. Players get knocked out when they fall too far behind the leader or take too much damage. This structure is the best thing about the game, as it effectively sidesteps the ability for a player to get too far in front, and those last couple of rounds are always so very intense. Coupled with the decent racing physics (though I would argue that it’s just a little too difficult to turn sharply), TNT Racers is, on a technical level, quite competent.

Unlocks happen far too quickly however, and players can effectively have nothing left to do in single player since the online leaderboards are a dull challenge. Of course, TNT Racers is only $10 Australian, but even at that budget price the parameters under which the game is worth its asking price are going to be too limited for too many people.