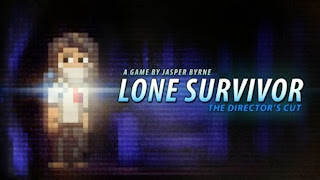 I’m often intrigued by games that try to offer more than just an enjoyable experience. When something comes along that has solid gameplay, but also brings with it a deep set of undertones, it makes the venture into the game much more worthwhile.

Originally released last year on the PC, Lone Survivor is Jasper Byrne’s attempt at creating a psychological survival adventure game, in 2D. At first, I was apprehensive. I had very little hope that a 2D game would be able to rightfully pull off an authentic sense of horror, but I was pleasantly surprised. You are a ‘lone survivor’ in what seems to be an endless night. You wake up in your bed after a terrible dream and find that the radio is broadcasting the same message over and again. You decide to head out and down to the streets, but as you walk outside your room you encounter a thin and slender figure that is drawn to the smell of rotten meat. The nightmare has become your reality! 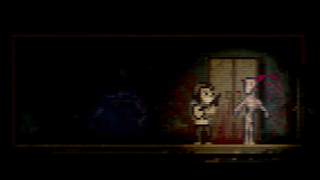 I don’t really want to spoil anything about Lone Survivor as it ruins one of the main focuses of the game: exploration. Throughout the game you are guided by your internal monologue, which will push you in the direction you need to travel, whilst also telling you when you need to sleep or eat, but you can, of course, choose to ignore what your body and mind are telling you. Rather than sleeping you can drink coffee or take pills to keep you going. You can eat when you feel like you are hungry or hurt, or you can just eat whenever you want. You can shoot any monster that gets in your way or you can choose to leave the handgun unequipped – the decisions here are yours to make.

At one point I emptied my handgun’s clip and ‘died’ due to supposed batch of insanity. I then woke up after the ensuing dreams told me of a way to replenish my ammo. It’s the (oftentimes strangest) things such as this that continually intrigue your curiosity about all the aspects of the game and encourages further exploration.
All games that enter the survival horror genre are associated with challenges that need to be met or overcome. Is it scary enough? Does the atmosphere and environment work to set the game’s mood correctly? For an indie game, Lone Survivor gets these basics down right. Playing on my Vita, I felt like I was looking at a retro television program. The washed out colour pallet gives the dystopian title an industrial feel that makes you feel as if you are more than just alone. Though, the sound design didn’t always gel with me. There were some great effects that were included, but the screeching noises that I experienced made it uncomfortable to listen to and as a result, it at times damaged the game’s immersion for me. 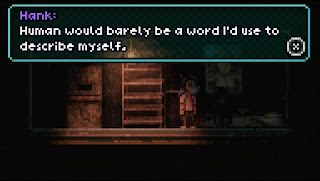 What’s most promising about Lone Survivor, and other recent indie titles like Papers Please, is how they’re approaching subject matters that are oftentimes pushed under the rug. You don’t really think about the inner turmoil of the character until you’ve finished the game. Then as you look back at your experience, you start questioning nearly everything: what was real and what was only apparent due to your insanity? Why did I do the things that I did? It’s a great gameplay aspect of the title and it’s incredible that was made by a sole developer.

Lone Survivor: The Director’s Cut is a great game. It has some flaws, but from start to finish you’re pulled into this dystopian experience that makes you want to get to the end to find all the answers. It has multiple endings, which are influenced by your actions throughout the game, so there’s definitely something to bring players back for more. Hopefully we will continue to see this level of quality from indie games for many years to come.

Review: The Legend of Zelda: The Wind Waker HD (Wii U)