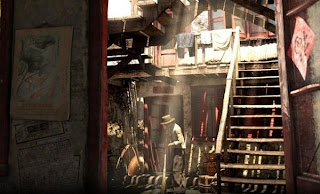 Whore of the Orient started out as a Team Bondi game, and was to be its next project after the rather brilliant L.A Noire.

Then Team Bondi imploded and the project was taken up by the KMM Interactive Productions, which is essentially a reskinned Team Bondi. Despite a rumour that the game had been shelved, it appears it is still on track, having just secured a $200,000 grant from the Screens NSW, a Government body.

It’s just been hit by a new controversy, however; a claim that it is offensive to ethnic Chinese by Jieh-Yung Lo; a councillor for the City of Monash in Australia.

“Australian institutions should be encouraged to fund projects and initiatives that cultivate mutual understanding and prosperity in the Australia-China relationship. We need to build greater trust and cultural understanding rather than promote division and negativity,” Lo told The Age.

Lo’s argument is that “Orient” is a slur of a similar level of impact to “N—–” to the African Americans. “19th century racial-colonial conception and it’s especially painful for older people in the communities,” he said to The Age.

Lo is threatening to take legal action and take the developers to the Human Rights Commission on the grounds of racial vilification. It’s worth noting also that “oriental” is a word that has been banned from official documentation in New York.

Doing a bit of searching through Google, there seems to be some debate about whether “oriental” is or isn’t offensive. I personally haven’t come across any instances of people taking offense to its use, and it surprises me that Lo, who claims he is a gamer, took so long to react to the title of a game that’s been around for some time now.

But by the same token I’m not involved in the Chinese community, and I know enough about Asian cultures to know that what is deeply offensive to parts of the culture aren’t offensive to other parts, and those outside of the community can’t possibly understand the truth either way. I know for a fact that “Jap” should never be used to refer to a Japanese person (unless you’re looking to deliberately offend them), and yet that same debate over whether it really is offensive or not crops up when you do a search for it on Google.

So I’m going to assume that Lo’s probably got a point here, and hope that the name of the game gets changed, because regardless of what it’s called Whore of the Orient is a game that I am so very interested in.

Interview: The mind behind SteamWorld Dig on Nintendo and indie development