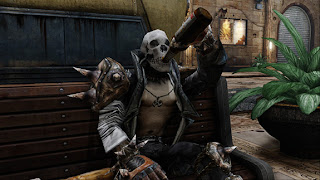 Doom. Quake. Heretic. Hexen. Those four names will mean a world of nostalgia for any gamer over the age of 25 or so. These games were all pioneers of the FPS genre and they all followed a remarkably similar theme; they were dark Gothic nightmares filled with demonic horrors.
Painkiller. Painkiller would want you to think it’s the latest game this very loose niche-within-a-genre. What it nails is the setting and the atmosphere. What it forgot to remember was that this style of FPS has been long obsoleted. 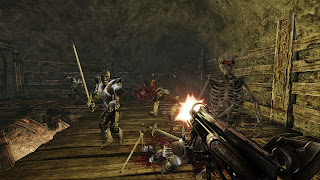 From the first moment this game starts to the moment it finishes, it is a non-stop intense ride; a little like one of those ghost trains at a fairground, really. It’s short, but the metal music is blisteringly effective, and the environments drip with atmosphere. From graveyards to dilapidated churches and hell itself, Painkiller goes overboard into B-grade horror atmosphere in the most delightfully entertaining fashion.
Then there’s the enemies. Oh how I miss the “Doom” genre-style enemies. The modern FPS is so focused on throwing people into military situations where they’re shooting up men in camouflage, or at best ugly, evil human-shaped monsters or aliens that it has completely lost its sense of fun. Painkiller has giant demons, cultists running around with axes and skeleton-freaking-warriors. Every new room brings a new horde of monsters, and the most exciting about the game is finding out just what is next in line to shoot in the face. 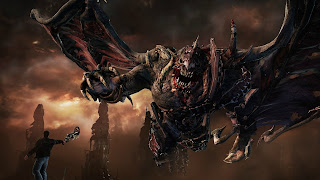 Unfortunately, once you get past the delightful aesthetics, the remainder of the game falls very flat indeed. When a game plays so nostalgic that it becomes archaic, it’s hard to hold it up as anything more than a passable weekend of fun, and Painkiller is not memorable in the slightest beyond the fact that you played a game where you shot stuff.
Comparing it to other FPS titles on the modern game shelf makes it look like it belongs to a completely different genre. The carefully choreographed set pieces of a Battlefield or Call of Duty game are replaced with screaming hordes of demons that run right into the line of fire. There’s no cover, no AI, and there’s no need to carefully consider your weapon loadout, because you can carry one of everything. There’s even secret areas to track down for extra loot. This is generally a good thing as the nostalgic authenticity is going to appeal to retro gamers in ways that other modern titles like Doom 3 tried to but failed to achieve. 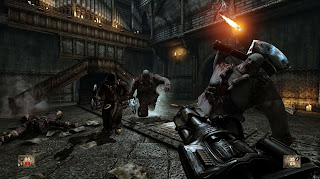 But there’s problems with this structure too. Doom was made in the 80s. Gameplay has evolved since then, and almost entirely for the better. Shooting up swarms of baddies while running backwards so they can’t hit you back becomes very repetitive, very quickly, and as cool as the environments are, they also lack completely for interaction. The slick controls and forceful feedback of guns in modern shooters is replaced by clunky, sticky movement and weapons that are weird in design, but have very little impact in the way they shoot. The shotgun in the original Doom offered a better sense of empowerment and force.
And while it’s impressive that the game manages to send dozens of enemies at you at once in all directions, there’s very little genuine thought required to play, other than the simple need to save the best ammo for the end of level bosses. In short bursts the frantic action is entertaining but in the longer term the lack of strategy is trying. The one attempt to do something original can be found in the Tarot card system. Complete a specific objective within a level to unlock the card, which can then be used in-level to turn the tables through some spectacular effect. It’s a neat touch but not nearly enough to make this game a compelling experience. 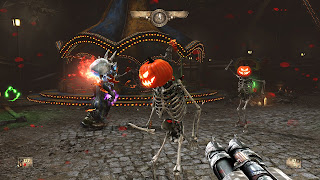 There’s a multiplayer mode too, but it’s very no-frills, and incredibly unpopulated. Unless you’ve got a friends list with a bunch of people with Painkiller, you’re not going to get many matches going, and when you do the appeal will wear thin fairly soon thanks to limited arenas and a fast-but-shallow combat.
The plot is singularly distasteful too. The leading man is a bad dude, but was redeemed by an innocent woman. They were both killed, and so bad dude descends into hell to rescue her. It’s the very definition of the “damsel in distress” plotline, and it barely comes into play after the opening cut scene. In other words, the game is misogynistic and for the most arbitrary of reasons – to give players a useless cut scene at the start and end of the game. Damsel in distress plotlines can be done in an innovative way that can be both subversive and intelligent. But here it’s like the game is deliberately out there to be backwards.
And that’s the problem with some retro throwback games – the key to success with nostalgia is to provide a game that feels like it came from an early era of games, but one that takes the best features from modern gaming to make something that’s still worth playing for more than the nostalgia. Painkiller fails there.