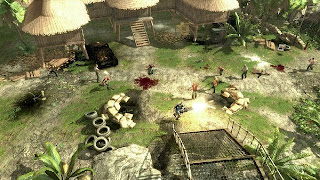 There are some pieces of entertainment that I, as an individual, am personally entertained by that I as a critic should perhaps not be. I look at those from my critical side, and what I see should make me wince and question why I as an individual enjoy it so much (personal examples include Dog Days anime, Lost Planet 2 game, and Black God manga).

Enter Narco Terror, an arcade-action game that both entertains me as a critic and makes me question its set of morals as a work of art. On one hand, I did have quite a good time playing Narco Terror and there is stuff within it that the game absolutely nails. On the other, there’s a genuine sense of ignorance and immorality that comes across as quite unhealthy in attitude. I find myself in this situation of being very much torn between aspects I enjoy and stuff that as a critic I just can’t ignore. 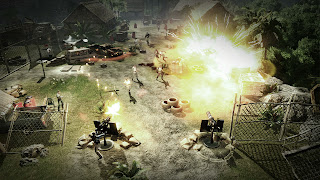 In Narco Terror, the player character is a young, white North American male working for a government agency. The main character’s enemies, who he either kills or leaves left for dead, are all poor Hispanics of some nature. I am not going to go so far to claim that this game is racist or promotes biogtry, but whatever intention developer Rubicon Organization had while creating Narco Terror leaves an unsettling sense that race is in some way important to this game. And in an era where North America is increasingly coming to terms with multiculturalism, that racial tone running through the game seems distasteful as well as ignorant.

With that aside, Narco Terror really is a well-crafted arcade game. It’s a twin-stick shooter featuring the right balance between casual and dedicated play. The first layer of gameplay on top of the standard shooter action is the ammunition type system. Stun, fire, homing, and piercing ammunition can be combined in whatever manner a player likes to either get out of a tight situation or to rack up more points. Shortly afterwords comes the limited-use weapons, which can cause massive havoc and easily elevate a score from mediocre to amazing. Lastly is the stationary turret sections, which offer a nice change in pace to the constant dodge-and-shoot action. These elements, combined with unique gameplay environments, all blend to create a game that is varied and never bores the player. 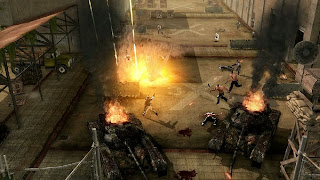 Of course, there are some small problems that keep Narco Terror from being up there with the finest examples of the genre. The biggest one is that the player’s jump direction and grenade throws are determined by the orientation of the character, meaning that often times the outcome of jumping or throwing a grenade is a little to twitchy to properly control. The game also fails to explain its weapon upgrade system, which might annoy some people until they figure things out. The animations and voice acting featured in cutscenes are not worthy of much praise, but those things is offset by the fact that the story is never a primary objective of the game.

In the end, it comes down to priorities. While I do have a question mark over a few of the game’s design decisions, my view has been that gameplay triumphs context and so I could enjoy this game for what it offered. Thus, I give this game an above-average rating. But to say that my judgment is final is wrong. In the end, players of this game will come to the conclusion of whether or not they are willing to praise this game or shun it.

Please participate in our Reader’s Survey!