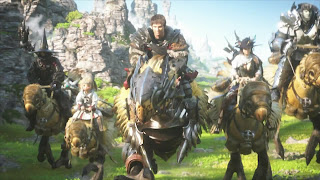 Escape Reality. Live the Fantasy; that’s the slogan plastered on the back of the box. It’s also the statement of intention for Square Enix, who desparately needed this complete remake of the original Final Fantasy XIV to work and to engage people on a very deep level to the point where it becomes a second life. The good news is that Square Enix has largely succeeded. This new Final Fantasy XIV is the kind of game you can lose months to, and fine proof that MMOs can work on console.

Everyone has played an MMO of some kind by now, and the formula is pretty much bedded down. Strewn throughout the world are people in need of your avatar’s skills, whether that be tuned to taking down monsters, playing fetch, or acting as a delivery man. It’s a love-or-hate kind of formula, and certainly the MMO genre has never quite lived up to the promise of living fantasy environments that World of Warcraft hinted at a decade ago, but this tried-and-true structure does efficiently drive players from one region to the next, and when the world is as filled with wonder as Final Fantasy XIV’s world is, being driven through by the nose is hardly something to complain about. 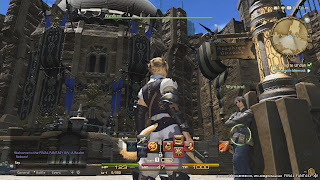 Equally important to a successful MMO is the implementation of an effective, engaging and deep combat system. Final Fantasy XIV nails this too. Admittedly I’m a casual MMO player, but I enjoyed that the combat system was relatively slow and strategic, and the range of abilities that my little hero can unlock have me happily grinding away, knowing that I’m going to unlock new toys to play with on a nicely regular basis. While I never played the original Final Fantasy XIV, I do know that one of the most common complaints was that the pacing was all over the place. From my time in this game I can only assume that fixing pacing issues was one of the major priorities in A Realm Reborn because here I felt it was very well balanced indeed.

Because I am a casual player I’ve been largely content with the adventure itself. I’ve not felt the loss of features like PvP (which is on the way), but I’m well aware that until that PvP patch is released that there are going to be some people that are disappointed by the lack of competitive spirit in A Realm Reborn. With that said there is a real wealth of content in the game as it stands right now. The “escape reality” part of the back of the box slogan would suggest that there needs to be more to Final Fantasy XIV, and there is. I’ve spent hours across the beta and this retail release fishing. I’ve spent hours more wandering around taking screenshots just because I find the environments so compelling. 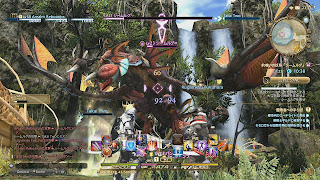 As with any other MMO there’s the potential for the community to ruin the game, if that community is unpleasant or filled with spam. Thankfully Final Fantasy XIV is, so far, fine. Perhaps that’s because there’s a sizable population playing with PlayStation 3 controllers and unable to type out sentences quickly. That makes having in-depth conversations difficult in the game and real socialisation is difficult to the point where there’s little reason to try, but it does keep the focus of the game firmly on the game, with relatively few unpleasant distractions.

Despite the difficulty in holding conversations, the PlayStation 3 controller does a great job in covering the rest of the game’s controls. A combination of a trigger button and a face button will activate abilities just as hotbars would work on a conventional PC. A second button cycles between “sets” of commands. This means 32 commands are available almost instantly, which is more than enough to comfortably navigate through the world and participate in combat. 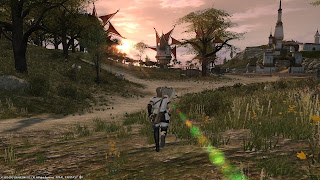 The other great challenge that A Realm Reborn faces is its monetisation model. At a time where free-to-play seems to be the preferred monetisation model for both consumers and developers/ publishers, going with a subscription model is a controversial choice. That said, there is something to be said about having a game with a constant stream of new content that isn’t constantly demanding that players shell out for all the good stuff. Final Fantasy XI survived for many years on this model, and I’m convinced that XIV can as well – especially now that the rejigged version is of a standard that should sustain a community, and the novelty of having a full-featured MMO on a console is going to earn a community in itself.

What is a little annoying is the game’s initial popularity. I’ve had trouble signing in to my favourite characters because the servers are filled up. For people who are going into the game from the perspective of having something to play for a hour or two before bed, having to sit and wait for a server to become available is wasted time, and I can only recommend that those more casual MMO or Final Fantasy fans wait a month or so for people’s initial 30-day subscription trials to expire. There should be a drop off in terms of numbers then, and that will be the time to jump on board.