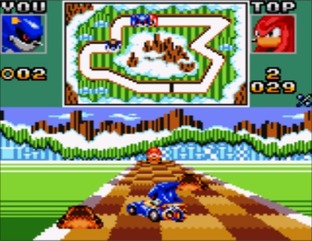 Think about all the things that make a great racing game; an intense sensation of speed, well-balanced racing lines and track design, and for party racers, a nice set of characters and unlockable weapons.

That’s my list of requirements; you probably have your own. I think, however, we can all agree that one thing we most definately were not thinking about was “hey, a good racer should have turns that pop in so quickly that if you’re not already turning, then you’re going to go off the track.”

Bam. Now you know why Sonic Drift 2 is one of the worst games I’ve ever played.

From the very first track the game insists that the only way to make a successful turn is to keep an eye out for the direction signs on either side of the road, and start turning then. That’s before the engine displays the actual turn. Ignore the signs, and by the time you’ve seen the turn you’ve ground down to a near-halt on the side of the road.

“So, just pay attention to the signs, you dimwit!” It’s an easy response, I know, and I would tell myself that every single time I went into a race. Amazingly enough in the Time Trial part of the game that mental preparation eventually worked, and I was able to zip around the tracks without doing some off-roading. Of course Time Trial is also quite dull because the game lacks the skill-based powersliding of the Mario Kart games to make shaving hundreds of a second off the best time a thrilling proposition. None of the items in Sonic Drift do much interesting stuff in Time Trial either, so this mode’s long-term entertainment value is limited, at best.

I could not for the life of me figure out how to focus on the signs in the Grand Prix mode, however. I think it had something to do with the fact the track with thinner than a typical one-way street and the AI opponent racers each took up over half the track. I was pretty focused on figuring out how to get past them with weak items and limited manoeverability and I tended to forget to check the road for tiny little square signs.

That’s the easy excuse, but the fact I just didn’t care about winning probably played into it as well. This is a Sonic game with no personality, the characters are a blurry mess of colour, and the tracks are, across the board, lifeless. Given the modern Sonic racing games are so much more compelling, it’s hard to imagine a time that Sega got a character racer so, so wrong.

There is no real excuse for this game. It’s an absolute travesty, and I can’t think of a single game on the 3DS Virtual Console that would be a worse investment than this one.