After a couple of weeks of sheer excitement with great new game releases – XCOM on the iPad, The Last Of Us on the PS3, and Time and Eternity for the otaku amongst us, it seems that we’re in a rare quiet moment for game releases right now.

So picking up Donkey Kong on the Wii U for $0.30 courtesy of a Nintendo promotion was a bit of a no-brainer. This is a game that I’ll quickly forget about once the releases pick back up again, but for a temporary time waster, it does its job.

I think just about everyone knows Donkey Kong by now, but it’s possible that many people new to the industry have never experienced one of the defining moments of the original Nintendo Entertainment System, or NES. This arcade game introduced many to the rivalry between Donkey Kong and Mario (or Jumpman back in the day) – well before Bowser was on the scene, and got people familiar with the basic tenants of platforming – jumping over barrels and gaps and picking up powerups in the form of hammers that temporarily turn Mario invincible.

Later Mario games would adopt the scrolling left-to-right movement that would become so popular, but in Donkey Kong levels were strictly a single-screen affair. Donkey Kong and the damsel in distress were at the top, Mario started out on the bottom. There were three separate stages in Donkey Kong, and completing all three would restart the cycle. Because this is an arcade game, it’s the high score that you’re playing for, rather than any sense of completion. There’s no end boss, no conclusion; it just goes on and on until Mario’s run out of lives. 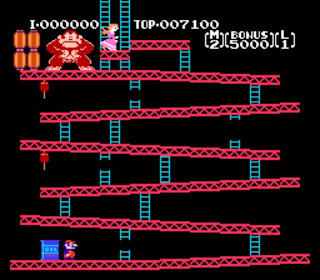 The game plays well, and the three stages are all different enough from one another to keep the variety in action high. There’s an odd rhythm that develops the more you play Donkey Kong, and beating those top scores will always kick some player’s OCD compulsions into high gear.

But here’s the basic reality of Donkey Kong; it’s an old game. Not old-but-timeless like the Super Mario games, but old in the sense that there isn’t much here now that will still attract players. Levels are light on features and aside from the too-random movement of the barrels there isn’t much to adjust to as you play on.  Because the game was solely designed to chew up coins in the arcade cabinets there isn’t any context to the game beyond the goal of “getting a better score,” and though the game controls well, the sluggish movement pace of Mario isn’t exactly inspiring.

For $0.30 Donkey Kong is a fun trip down nostalgia lane. Once the price bumps back up to the $6.50 or whatever Nintendo is charging for NES Virtual Console games in your region, it stops being worthwhile.