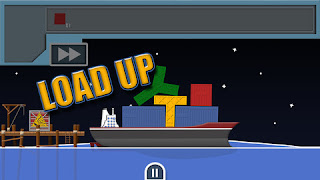 Within the casual puzzler market on iOS, it’s virtually impossible to stand out now. Whether it’s an in-app purchase freemium title, or sold at $0.99/ $1.99 purchase up-front game, there’s virtually nothing that we haven’t seen in some form before.

Given that these games do need to compete with Angry Birds, and a host of other classic titles, it’s a big ask to expect newcomers to compete with the incumbents. That’s what Cargo Chaos is up against, and as much as I’m willing the Aussie developers behind the game the best success with their game, it’s hard to imagine this hitting the same lofty heights.

Cargo Chaos, like most iOS physics puzzlers is a simple concept broken up into a multitude of increasingly-difficult levels. In this game players need to load up a boat with cargo boxes, which for some reason come in all kinds of weird shapes and sizes. Once they think they’ve got the ship properly balanced, a tap of the “play” button sets the ship’s journey in motion. Ships roll up and down waves and weather everything from storms to sea monsters. Players continue to try and balance the cargo as the ship sales, and assuming that not too many boxes are lost into the ocean during the trip after a minute or two the ship arrives at port and players get a score based on what survives. 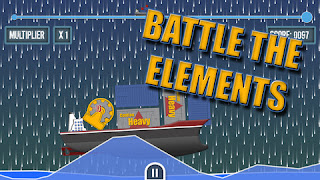 The game’s faults are not immediately obvious; in fact for the first dozen or so levels there’s a great deal of fun to be had with desperately trying to hold the cargo together as the sea goes from a gentle roll to waves that made the one that sunk Poseidon look like a ripple, and through storms that make the Perfect Storm look like a gentle breeze.

But after that first dozen levels, the game’s weaknesses come to the fore. Though the physics are impressive for a game made by such a small team, they are by no means perfect, and once the difficulty hits the point where a slight error means the difference between a top score and utter failure, it’s no fun to also be second guessing this game’s gravity. And, though the developers have to be commended for keeping the variety found in the game strong by throwing a constant stream of new challenges at players, this game is relatively expensive for its genre at $1.99, and offers a tiny fraction of the levels that its immediate rivals offer.

That sounds harsh, I know, because this game is, again, a tiny indie game, and because it’s an Australian product and refuses to charge additional through in-app purchases I really wanted it to succeed. But all it offers is a pleasant visual palette, pleasant music, and some fun but ultimately limited physics puzzling.

That is, sadly, not even close to enough for the modern app store. This team has talent and I’m looking forward to the next game; I just hope Cargo Chaos earns enough revenue that the next game is less forgettable.