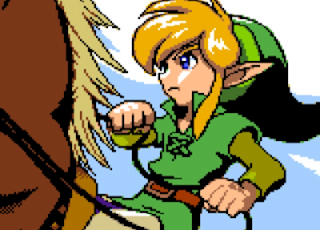 The majority of the adventure genre is fittingly moulded around exploration. The most common approach to “exploring” in retro gaming was to utilise trial and error puzzles with ambiguous solutions rather than teach the player intuitively so that the length of the experience could be drawn out. The former approach still exists today, lingering on through the eras in titles such as the Punchline-developed Chulip.

The Legend of Zelda: Oracle of Seasons has rather different origins from Chulip but both games were in fact released within a year of each other. The relevance? Adventure games can be perfectly gratifying when devoid of this vague mystique. Problem solving still plays an integral role in both games, but Oracle of Seasons is ultimately the more successful experience. Worthy of mention, though, is just how downplayed puzzles are in this game.
A greater parallel can be drawn with the companion game to Oracle of Seasons, Oracle of Ages. Both titles were released simultaneously by the same developer. The concept of having two Zelda games so similar to one another may seem like a Pokémon-esque cash scheme, but the titles are worlds apart in terms of design philosophy.
Both titles take the two most established aspects of the Zelda franchise (power and puzzles) and amplify them whilst softening the opposing ideology. This sounds like an excuse to justify retreading ground for the series, but playing for just an hour or so reveals just how dedicated Capcom was to really emphasising this design approach and in doing so creating a wholly focused and unique adventure for long-time Zelda fans.

So Oracle of Seasons in particular is based on “power”, or more accurately, exerting it at every conceivable opportunity. While the foes and obstacles are not terribly threatening in and of themselves, the clever placement of them means you’re going to either die a lot or learn to be cunning yourself. Most of that canniness will need to be done with your sword and movement skills rather than your perceptiveness of the broader environment. 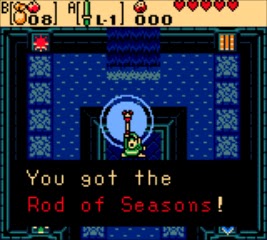 Puzzles are intact, but Seasons mostly features ones that revolve around pushing blocks or defeating enemies. In general, dungeons are straightforward and contained so that you can play with minimal downtime and interruptions and retain a sense that this is indeed a Zelda dungeon. Especially impressive is the way the dungeons are designed in order to hint players through them, without making it obvious that they’re doing so. You won’t need a playguide for this game, but at the same time you’ll feel like you’re working through the adventure on your own accord, rather than being led by the nose.
Even though there were no artificial swords or fairies incessantly urging me to progress, paying the vaguest attention to the game’s dialogue kept me from ever straying hopelessly away from the yellow brick road. In fact, this is probably the antithesis of the recent Skyward Sword. Whereas that title sought to drag things out in a largely empty world with a fetish for the superfluous, Oracle of Seasons achieves something far greater with limitations galore. Admittedly this likely has more to do with the alternative approaches used for handheld and console games (especially at the time of this game’s original release) but I wouldn’t exactly complain if more titles took some notes from classics like this.
The reduction of brain teasers still leaves plenty of room for a healthy – but ultimately fair – challenge. Certain adversaries can be taxing initially, but generous spawn points and mid-dungeon warps allow you to regroup without sacrificing much. You’re left to ponder not “what should I do?” but how best to tackle what’s right in front of you. Particularly demonstrative of this are the boss bouts that dare to buck the obnoxious Zelda cliche of making you use the item you have obtained in a dungeon to defeat them.
Oracle of Seasons is actually a reasonably lengthy game, but this frantic, action-heavy approach is enough to convince you otherwise. There are still plenty of conversational bits to enjoy and sufficient sidequests for those seeking extra length, but it’s all going to flash before your eyes. 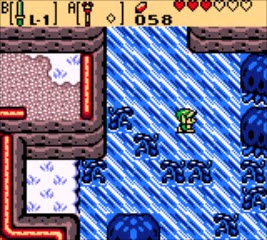 None of the above is to imply that Oracle of Seasons lacks the charm the series is known for. Heck, the game’s visual style and overworld theme are ripped straight from fellow Game Boy title Link’s Awakening. Exploration is still a vital part of the whole process and takes time, but all of those sporadic obscure patches featured in past games have been weeded out.
The only thing that drags Seasons down in any quantifiable manner is the fact that the Game Boy only had two action buttons to work with. Link is going to acquire a whole arsenal of gadgets by the end and the need to incessantly swap items (particularly during some dungeons) makes progression slightly cumbersome at times. Despite enhancing the combat, the foes that require two items to beat are particularly irritating with this constant swapping.
The Legend of Zelda: Oracle of Seasons puts action at the forefront but still has time left over to exemplify how adventure games should be built. The game will appeal to all parties as it offers a guiding hand but never bogs the player down with unnecessary information and still places enough trust in them to explore.

Nintendo concedes to free-to-play, surely the pressure is on for it to go mobile too?