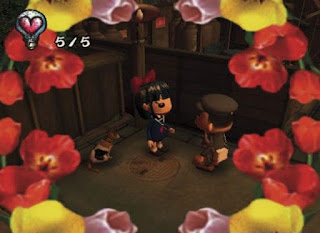 Most people spent their childhoods riding bikes, attending school, or perhaps indulging in the occasional video game. The protagonist of the Natsume-published Chulip transitions into adulthood by kissing police officers, train conductors, alien monkeys, underground onions, and the drunkard father of his love interest. Clearly most people had nothing on this kid’s childhood.
Yes, Chulip is the heart-warming tale of an impoverished boy that moves to the “peaceful” Long Life Town with his father. His one ambition is to kiss the girl he saw in his dreams. In order to do this, he must first strengthen his heart and social status by smooching the outlandish townsfolk and underground denizens.
Despite the game’s cutesy vibe, Chulip’s world is anything but peaceful. The casual atmosphere and nonchalant background music mask the fact that Long Life Town is chock full of characters and objects that simply want you dead. Being the young boy that you are, the player’s only defence against all this is wit, luck, and the ability to smooch residents into appreciating you.
Unfortunately, most of the game comes down to luck and guessing. A spontaneous smooch will get you slapped and break the young protagonist’s heart. Depending on a character’s type, you may need to develop a relationship with them, help them solve a problem, or simply walk up to them and pucker up with good rhythm. 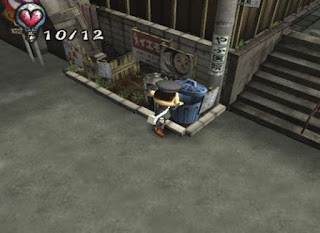 Should your hero’s heart gauge hit zero at any time, he’ll be sent to the game over screen. Unless you’re omnipotent or choose to have the game’s instruction manual at your fingertips, this event will occur hundreds of times. Every time it does, you’ll throw a fit that there’s no automatic save feature and that save points are so infrequent. This is ultimately what will dissuade many players from picking up the game and I honestly can’t deny this being a problem.
With such an endearing cast, you’re going to want to explore every nook and cranny of Long Life Town. The town is reminiscent of Majora’s Mask, featuring alterable time-based character routines and plenty of secrets and back-story. Unfortunately, this is also where Chulip falters, punishing players for acting upon that curiosity. If you do something as trivial as search the garbage for a quest item, you’ll more than likely find yellow, swirly defecation that inflicts damage on your heart.
At the beginning of the game especially, you need to strengthen your heart so that you can afford to just examine the world. Trying to actually do so will get you killed, as I’d wager this is one of the most cryptic games ever released on the PS2. It’s a vicious cycle of charm and irritation.
If you want to save yourself copious amounts of tedium, you can take a peek at the game’s virtual instruction manual, which includes a walkthrough for the entire outing. It’s a rather backwards approach to playing a game, though. In fact, some will argue that a video game is pointless if you’re encouraged to read a walkthrough throughout the entire experience.
For all of that, at its heart (I see what you did there… punny! -ed) though, Chulip is really more of an adventure than a game. If you can enter the experience with this mindset and are not above resorting to the instruction manual occasionally, it’s worth doing so because the game does become endlessly gratifying once you know what to do. 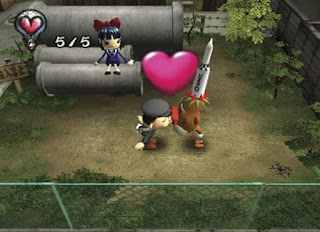 There’s also something indescribably fulfilling about landing a kiss. Perhaps it’s just because the game makes a big deal out of it with over the top fireworks, dramatic music, and spacey backgrounds, but there’s a certain rush of adrenaline akin to beating a hard level in a platformer that makes you forget about all the tedium you just put yourself through.
The game’s world is accentuated by stellar visuals. While certainly not technically ambitious, they provide an element of innocence to the startlingly dark town. The soundtrack augments the tone with quirky vocal pieces that will haunt your sleep for months after the game’s completion. The developers clearly had a tremendous vision for Chulip but designed it in such a fashion that very few will enjoy it as a traditional “game”.
At risk of being pretentious here, Chulip can be summarised as being an analogy for relationships. At times they can be tedious or frustrating, forcing you to compromise over seemingly menial matters. But with so many unforgettable experiences and the lovable personality that joins you for their duration, it would be a shame to forgo them entirely. Just like the love of your life, there’s nothing quite like Chulip.