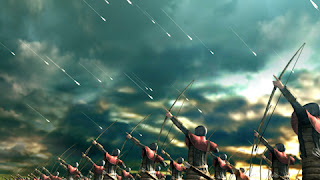 Just recently Bladestorm, a Koei game from back in 2007, was released for download on the PlayStation Network. Given that Digitally Downloaded wasn’t around when the game was originally released, we felt that now would be a good time to remedy that gap in our review’s database.

A bit of history for you about this history-based video game: Released way back in 2007, about a year after the PlayStation 3 itself released, Bladestorm was a bit of a next-gen pioneer, being a new IP released across both Xbox and PlayStation platforms.

Tecmo Koei (then just Koei) and its in-house developer, Omega Force, took its unique capabilities in mixing both strategy and action and applied it to Europe’s Hundred Year War. Specifically, those bits of that war involved Joan of Arc. 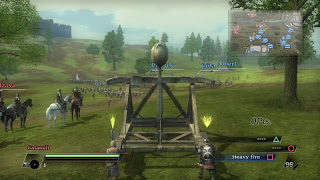 Essentially the game is an extension on the Kessen real-time strategy formula. A coming together of the Romance of the Three Kingdoms and Dynasty Warriors combat. Both visceral and a test of the brain.

Unfortunately as much as I would like to say this game was a major success for Koei, it wasn’t and was, in fact, exposed to Tecmo Koei’s usual range of reviews from people that just don’t get into the formula, to people that would take the game disc to bed with them. There were those that would never play the game because on the back of the box it isn’t the prettiest game out there. But then there are people the appreciate the scale of the conflicts in the game and the fact that there are thousands of soldiers on the screen at once, even if each individual soldier wasn’t exactly the definition of “next gen” rendering. In other words, Bladestorm was a game that divided people back when it was originally released, but I do hope the PSN re-release helps find it an audience, because this is a forgotten game when I would like to see it turn into a franchise. 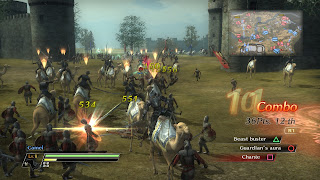 In a Dynasty Warriors game players are in control of a single hero running around battlefields slaughtering hordes of peons and the occasional rival hero. In Bladestorm you’re still in control of a single hero, but this person is actually pretty useless by him or herself. Get caught alone by an enemy unit and you can kiss your backside goodbye. This is because in Bladestorm your hero is a commander, and their role on the battlefield is to run up to a friendly unit, take command of them, and lead them into battle.

Once combat is joined it’s just a matter of pressing down on the “fight” button, and occasionally use a face button to activate a power unique to that unit to help them in battle. Heavy infantry get a shield bash, cavalry get to do a charge down attack. While commanding just one kind of unit in combat over and over again would get rather dull thanks to that minimalist combat system, being able to jump between just about any military unit type you could think of (including exotic units like knife fighters, camels, elephants and magic users that probably didn’t have much of an impact on real French battlegrounds) ensures that every battle is a truly memorable combination of clever swapping between knights to cover distances and punch holes through infantry, archers to soften the ranks up, and then down-and-dirty melee to capture key objectives. 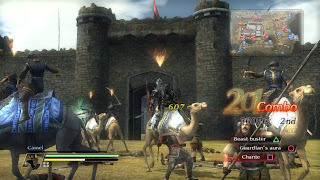 As the hero wins battles with units his/ her experience in leading that unit increases, allowing players to customise the size and skills of those units when he/ she commands them in battle. It’s impossible to specialise in everything in any single play through and so there is a lot of incentive to replay the game in order to try out different units and strategies.

Further increasing the replay value, there are multiple routes through the game. The hero of Bladestorm is a mercenary, which is gamespeak for a convenient excuse to jump from side to side as it suits the player. And in fact the game encourages players to play both sides of the field to keep a balance between the sides. In true Koei fashion if a player plays well they do feel like they are a major factor in which side wins battles – and indeed the whole war – and this is very empowering when from one side of the (very, very large) battlefields to the other are units fighting with one another. 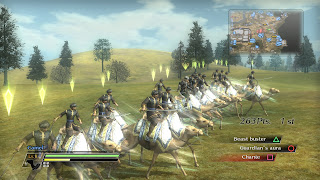 I can’t overstate just how grand the scale of Bladestorm’s battles are. Conflicts take up entire regions of Europe, and these regions are split into smaller “squares” of land. Within those squares of land are typically a half dozen or so strategic points of interest or towns. Each conflict is also split up into a few days, and on any given day players will fight over one single square of land. Then they’ll be taken back to the map to see how the battle is playing out and the next day they can select a different square of land, either to shore up defences of lead an attaching push.

With that kind of scale it would have been wonderful to have a multiplayer mode where a group of a number of mercenaries per side could team up to participate in strategic battles, but alas Bladestorm happened before online play was a big enough deal for smaller developers to bother with. And released on the PS3 at the time it was I do feel that it probably never hit the sales numbers it needed to justify a sequel. Perhaps the PSN release to a much larger audience can generate enough new fans for a Bladestorm 2 release about a year into the PS4’s life, with that multiplayer added in.