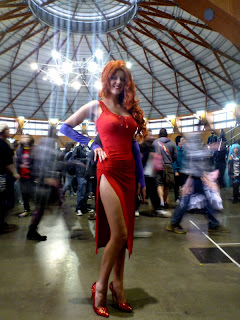 One of the real highlights from the Supanova show over the weekend was, of course, the cosplay, and there were some really amazing costumes on show this year around.

We’re not just talking about the cosplay competition, either. In fact, some of the people with the very best costumes didn w’t get into the competitive side of it at all. They were there to have fun, and have fun they did.

What was most amusing though was getting on the train to the show and seeing so many people already in costume on the platform or train. Where the costumes were completely normalised while at the show, these people drew all kinds of strange looks elsewhere. They didn’t care, naturally, but it was interesting to observe just how foreign and alien the cosplay culture is in mainstream Australia.

Anyway, it wasn’t just games characters – Supanova was a show for all TV, movies and anime fans, and they all turned out. So we’ve stuck together a slideshow of some of the fun costumes that we saw around on the day: