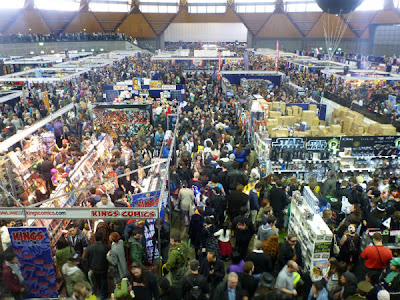 Over the weekend Sydney played host to Supanova, a major show for all things pop culture. And the people, they came in droves.

This was the first time I had attended the event, so I’m not sure whether the sheer volume of people that turned out was to be expected, or was abnormally high, but in either case I do recommend that the organisers find a way to space things out better next year. Though the hall was massive and played host to a massive range of vendors, it was also crushingly, stiflingly claustrophobic in there thanks to an attendance that was surely too large for the venue.

It was also possible that people stayed indoors because the weather was so bad. I can imagine that if it was sunny (and not raining in the middle of winter) then the show would have spilled outdoors as people met up with friends and had lunch and so on. Because the weather was so bad though, they simply tried to find some rare space indoors to do this, further compounding the traffic problem.

People were barely able to move through the busier thoroughfares, much less browse the stands for interesting objects to purchase. There were all kinds of my favourite things at the event – from anime and Japanese game character miniatures (including some Monster Hunter Airou miniatures that I would have almost certainly purchased if I wasn’t squeezed out by a crush of people), to board games, Magic the Gathering, anime and cult movies, a genuine pinball competition and, yes, video games (Nintendo and Namco Bandai both had booths set up). In fact, if I had have felt physically comfortable I’m pretty sure I would have spend a small loan’s worth of money there and then. I guess I should be thankful that the environment was a little too busy for its own good, then. 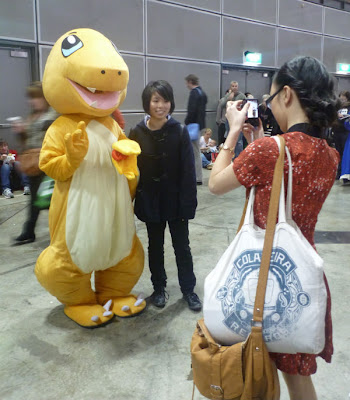 At one point things turned truly nasty, too. There were people lining up to watch the cosplay competition, which was to take place in a small arena. A much too-small arena, as the crowds were several times too large for the available seats. There was no order in place for this line up, so naturally when the doors opened there were people pushing every which way to get in. That was bad enough, but only after the doors opened did the management decide to implement an “official” line. Needless to say things got really crazy then with organisers pushing back against people who were understandably peeved that they just went from the front of the crowd to being forced to the back of the line. People were, in fact, pushed over, and since there were other people with young children and babies in prams in the lines this was unforgivable.

Sorry, Supanova, but if you’re going to run a cosplay competition next year then either take into account that perhaps a sizable percentage of people will want to see it, or get some organisation in place before the actual event.

The crowds aside (and for the most part everyone in the arena took the noise and bustle with good spirit), the event itself was an incredible melting pot of pop culture and people came together to make for an event that really had a great sense of fun. There were dozens of cult celebrities, from Raymond E Feist to Princess Leia herself all the way down to the almighty Zim. These people were doing the standard Q & A panels and signings, and there was the aforementioned cosplay competition and seminars on a variety of topics for the more dedicated fans. The organisers of Supanova did a really great job of pulling together a big list of personalities that matter to the pop culture world, and I commend their efforts in giving a very wide range of fans that celebrity experience.

The cosplay itself went well beyond the competition too, and it was great to see a good half of the audience get into the spirit of the event by dressing up as their favourite characters, or just nerding out with fun t-shirts and hairdos. We’ve got a gallery of some of the better cosplayers coming along later.

It must be said though that much of the show was focused on the shopping. This was good in one sense – I discovered some new shops for miniatures, and in Australia those can be hard to come by. It was perhaps not so good from another point of view as I found it hard to justify spending the full two days there.

Then again, what I did see going on was people meeting up with friends and groups of cosplayers catching up. Perhaps these people were from interstate, and they do only really have events like this to do the cosplay thing. It’s not like Australia has a Harajuku or Akihabera where cosplay is institutionalised. From that perspective Supanova was an incredible success and I look forward to seeing what they do with it next year.

The weekly discussion: How do you use game walkthroughs?