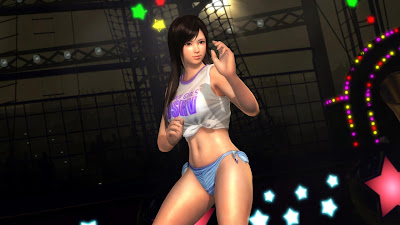 An interesting little story over at Polygon hints as a possible future for the fighting game genre – the Dead or Alive 5 Ultimate game, due for release later this year, will release in Japan with a free-to-play option.

The free-to-play version will come with four characters and all of their non-DLC costumes. Additional characters will cost roughly $4 to unlock. All the single player game modes and online play are free, as well, though the story mode will be around $15.

And of course the DLC bikinis and things will remain a paid-for item. Now, I know there are legions of gamers out there who are not keen on the idea of free-to-play (digression: my personal belief is that they simply misunderstand that free-to-play is not “free”, but that’s for another day), but I do think that for games that are built out of small components, like fighting games, this purchase model makes far more sense for less hardcore fans.

Take me, for instance. I’m a less hardcore fighting game fan. Even Dead or Alive 5, which I have dumped hundreds of hours into, I’ve only played so much because my wife enjoys the game too and it’s some fun local multiplayer. For most other fighting games I’m over with them before they even hit the 20-hour mark.

Now for a story-based game I am deeply engaged in, buying the game by the level would frustrate me greatly, but here’s the thing with fighting games; there’s only a few characters that I like using, and in most cases (certainly the case with the Dead or Alive series), I don’t really care for the story mode. So, for me, Tecmo Koei is offering me significant savings with the free-to-play model. I’d spend $12 on Hitomi, Lei Fang and Kokoro, and then combined with the four free characters, I would have enough for this game. This is far better option for me than spending $60 or whatever for the full game and a bunch of characters I would only play with once.

Actually, I would likely then spend a load of cash on the costumes, but that’s another digression.

Tecmo Koei is still doing right by its customers by giving the people that want to own everything the ability to buy the retail disc with everything unlocked, but this free-to-play option has potential ramifications beyond the ability to give people the opportunity to pay as they use.

See, the great thing about free-to-play is that, as people keep playing, they keep spending. This encourages the developers to keep supporting the game with more content so they can earn more revenue from it. By compartmentalising everything then more of everything can be added in at a later date in a far more seamless way. We’re talking about more characters, more costumes, more levels. Look at the success of Rock Band – because consumers kept buying the additional music tracks, the developers continued to supply more content. When people are also paying for fighting games by the character we could well see the rosters of these fighting games grow even larger than they’re getting now.

Fighting games with a roadmap of years of content certainly gets me excited.