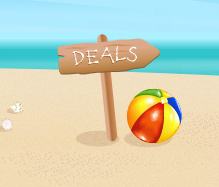 There has been a lot of discussion of digital rights management (DRM) in the video game industry as of late, and much of it is negative. It can all be traced back to the week following the reveal of Microsoft’s Xbox One, where official statements swayed back and fourth until Microsoft confirmed that every game for the console would be forced to perform a DRM check-up and that the console would have to perform a daily server check to properly function beyond a 24-hour period. Whether you view it as undeserved or not, Microsoft’s DRM controversy has been criticised, defended, and taken advantage of. Today, we might just have another instance of that last category.

Good Old Game’s #NoDRM Summer Sale promotes buying classic and modern video games for low prices, all of which contain no DRM whatsoever. The, “No DRM,” part is not all that surprising, as one of the defining features of Good Old Games (GOG) is that all of the games on the service come with no DRM restrictions whatsoever. This begs the question of why GOG Limited (the company behind GOG) included the ‘#NoDRM’ part in its summer sale, as from a technical standpoint including that bit is just a practice in redundancy. My guess is that the company is playing off of the trend of negative attention being given to the Xbox One.

As an added bonus to the summer sale, GOG Limited and Runic Games have made a deal to distribute the original Torchlight on GOG for the asking price of absolutely nothing. While the original Torchlight is by no means as refined as its successor, Torchlight II, the original is an entertaining Diablo-clone that can run on a breadth of modern computers. If you have any interest in Torchlight and still haven’t played it, act fast as the free deal ends on June 20th at 12:59pm GMT.

This sale and the free Torchlight giveaway are also two of the best excuses to create a GOG account, allowing yourself access to a wide range of classic games that have been optimised to run on current machines. GOG is my favorite digital distributor of games right behind Steam, a very high compliment coming from someone who embraces digital distribution and uses it quite often.

New screens and the E3 trailer to Killzone: Shadow Fall