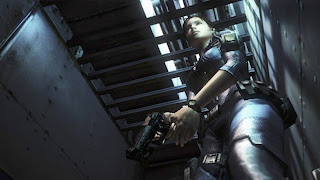 I don’t think this will be news to anyone who has read my reviews of Resident Evil before (hint, hint), I’m a big fan of the series. Resident Evil: Revelations was originally released on the Nintendo 3DS last year and now it’s back and ready to scare once more.

The majority of the game is set on the Queen Zenobia, a derelict ship floating somewhere in the Mediterranean. Jill Valentine and newbie Parker Luciani are sent to the ship, believed to hold Chris Redfield and Jessica Sherawat, another newcomer character to the series (oh good, because non-fans of the series really needed even more characters to confuse them – ed).

Capcom have to be credited for the ambition of Revelations. It takes the same approach of Resident Evil 6, having three separate story arcs. Although one of them is very poor in terms of characterisation and gameplay, they all manage to contribute to the story at hand. What’s great about Revelation’s story is that there’s more to it than being a simple Zombie outbreak, though in the interest of not spoiling it for anyone we’ll leave it at that. 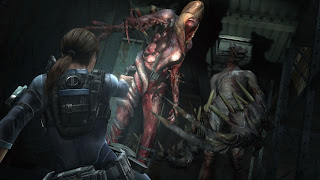 Though adopting an episodic format may have been beneficial for the handheld version of the game – and I did enjoy the narrative overall – the format doesn’t really translate well to the console experience. Some episodes only require you to walk to a location, without shooting at all. And they’re all short; my final game time was somewhere around the 11-hour mark, and with 12 episodes the brevity really breaks up the atmosphere and really dampens the experience.

It’s such a shame because Revelations is amazing when located on the Queen Zenobia. You’re on an abandoned, zombie-filled ship in the middle of nowhere, and that’s a good thing for the horror theme of the game. Imagine the original Resident Evil and the Lost in Nightmares DLC from 5 had a child, and you would have the Queen Zenobia. It’s the little touches that set it apart. Standing still and you rock from side to side. You hear the wind brushing past broken windows. Metal creaking. The sound design really creates a spooky atmosphere. Whenever you’re playing a chapter as Jill on that boat you are playing one of the best Resident Evil experiences available. 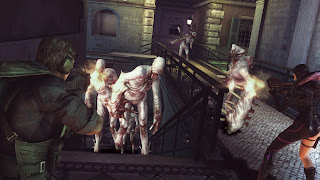 The newest feature in Revelations is the Genesis. The Genesis is a scanner that has two uses. The first is the ability to find hidden weapons in many of the rooms you come across. Almost every room has some ammo, a herb or gun parts in them so you’ll spend a lot of time trying to find everything. The other use, which is much more helpful, is the scanning of enemies. Every enemy that you scan will earn you a certain percentage. When these add up to 100, you get a herb. Many times I found myself out of herbs and relying on the scanner to give me a quick health fix.

Another great addition that has returned from the older games is the lack of ammunition. Enemies don’t drop ammo when killed and the only way to pick up ammo is to either find it distributed throughout the game or through scanning. You don’t tend to notice how much ammo you need to save, until you come across the first boss. It’s beautiful. You are only allowed to have three weapons equipped at any one time, and you’ll run out of ammo very fast. It’s also good to see that the bosses are difficult. I’m pretty sure I died on every boss the first time. I didn’t mind it. Weak spots are sometimes hidden and you have to really be on your toes. 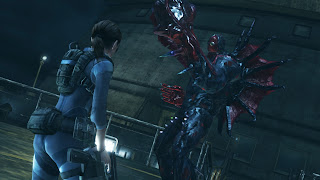 If only the game stayed on the ship. The Jill and Parker storyline for the most part, doesn’t deviate from the survival horror gameplay. But then Chris and Jessica’s story kicks in, and it has zero emphasis on creating atmosphere; it is all run and gun. Even running through the same hallways as Jill and Parker it feels different, and not in a good way. I’m struggling to understand why that’s the case. I know that a lot of fans didn’t like what Resident Evil 5 did to the series, but there was still a good game in there. The formula worked. It was even replicated in The Mercenaries 3D. But in Revelations, Capcom failed. I’m not saying the gameplay is bad. For Jill, it works. You need to be accurate when shooting to get maximum damage from your shots. The problem is that Jill’s survival horror gameplay does not work for Chris’ action levels. Either Capcom should’ve created a system that works for both situations, or focused solely on one.

There is also a dodge. I’m not sure if it was poorly explained, poorly implemented or a bit of both. It’s very inaccurate. Most of the times I found myself running into an attack rather than dodging it. On most cases you’re not going to die from this, but I felt cheated by it anyway. 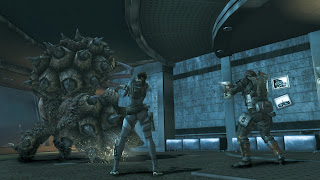 That being said I really do love the way that Capcom have managed the healing in Revelations. There is no health bar, and so you have to judge for yourself when to heal. It’s such a great system; sometimes I felt I probably could have taken a few more hits, but the environment around me was so intense that I felt the desperate need to heal up anyway.

I’m not a fan of the AI though. Again, I’m drawing back to Resident Evil 5 and 6. Both games show how well co-op can work, but I feel if they were going to include an AI partner they should have allowed both to be controlled. I would’ve preferred it if I was by myself for the entire game. There is one point in the game where Jill has to return to a body, to retrieve a key needed to progress. When I got to the body, I discovered that I was now facing a terrifying boss, all on my own. It’s probably one of the best sequences in the entire game. In many cases, it feels as if the partner was added for sole purpose of co-op gameplay, and I just don’t feel it was needed (yes, that’s right, Capcom, horror needs isolation – ed). 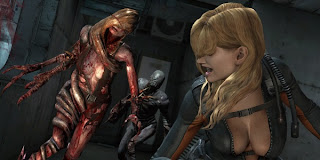 Whilst the game is very nice to look at, my biggest gripe was that the character models don’t seem to change at all. Even with my handgun equipped there was one still holstered at my side. I’m nitpicking, yes but I expected a bit more of this re-mastered edition.

Raid Mode replaces the traditional Mercenaries multiplayer game and while it’s nice that it’s there, it doesn’t add that much to the experience. Each stage is taken from a chapter in the game, and you’re required to make to smash a BSAA emblem to complete it. I did like the introduction of experience levels though. Every enemy you face is given a level, which also indicates their health and how hard they hit.

I really wanted to love Revelations. What Capcom did with Jill was just great. It’s classic Resident Evil! You’re backtracking to complete puzzles and dodging zombies in narrow corridors. But I can only just like the game as a complete package because there’s so much that just doesn’t work. There should be no need to inject fast-paced action into the formula. There’s also the fact that this re-master fails to add anything to the console version to move it away from the 3DS, and that really is evident in the episodic format. Raid mode is nice, but it’s not enough for me to stay on this voyage.