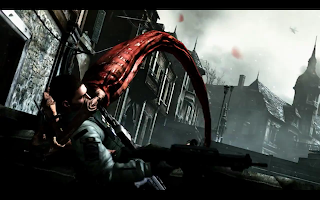 Resident Evil 6 was one of the more controversial games from last year. It disappointed many, and for many others it was a guilty pleasure. So now that we’ve had a while to play it, replay it and think on it, where do we feel it really sat? Read on for Sam’s full review:

There is a lot of hate that is geared towards the modern Resident Evil games. Fans of the original series long for the return of a game that is dripping with the horror that is so sorely lacking from the action orientated direction the series has turned to. Yet, Resident Evil 6 proves that the current format of the game is a great success for Capcom, even if it is not a great Resident Evil game.

Resident Evil 6 closely follows my opinion about how the Resident Evil license was used in the recent Operation Raccoon City. The game could have a brand new IP attached to it, and would probably have gotten a better reception if it wasn’t associated with that history. Resident Evil 6 fails to do anything to advance the story of the series. There is a new virus, again, something about a Neo Umbrella and Wesker’s son brings some uninteresting confrontations. It’s not that entertaining and the cutscenes, although impressive to look at, are just asking to be skipped.

That being said, the gameplay that splits up moving from cutscene A to cutscene B is a great improvement upon Resident Evil 5. There is still a great focus on action, but there is a return of aiming at certain body parts to perform melee finishers. Further moving away from RE5 is a much greater reliance on melee attacks. If you shoot an enemy you will almost always be given the prompt to press one of the trigger buttons. 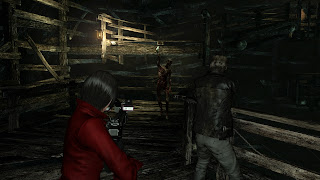 The movement system meanwhile is a mix between poor and impressive. Running removes any feeling of control. Additionally the high sensitivity makes it near impossible to run in a straight line so you’ll often end up seeing your heroes zigzagging. Another addition is the ability to move while shooting. It’s not the addition I thought the series really needed but when you are face to face with an enemy that won’t go down it will offer some relief. The greatest addition would have to be the sliding. The action sections that are filled to the brim with zombies bring lots of panic, especially on the higher difficulties. When you slide, you are able to quickly roll out of the way of oncoming enemies. It’s a step in the right direction in creating a truly fluid action system.

There are four campaigns on offer, each with their own different flavour. Leon is joined by newcomer Helena, and work to uncover the cause behind the virus. Aside from the slow start, it’s a great journey. Chris and Piers’ campaign takes the crown of being the Gears of War clone. Jake and Sherry’s campaign works to recreate the sense of being hunted like in Resident Evil 3. The campaigns are decent length. Each are comprised of five chapters, which can last from forty-five minutes to an hour and a half.

The bosses are still ridiculous and bring a real cheesy feel into the overly dramatic scenarios. From zombie mega-sharks to invisible snakes, you have everything that only would make sense in a B-grade horror film. Adding to that, the J’avo (an offspring of the g-Virus) constantly adapt to injuries sustained on their bodies. Shoot an arm and a claw grows out of it. It’s good for adding on the fly changes to make you think differently about where you shoot, as the now changed body parts are the best places to shoot. As you progress through the four campaigns, you will encounter a wide variety of enemies, all seemingly arriving in the final chapters to bring as much stress as possible. 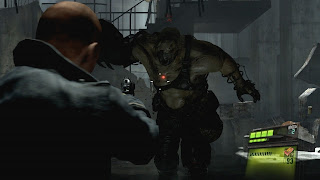 Another disappointment of the game is the over-reliance of quick time events. If an enemy grabs onto you, there’s a quick time event. A boss needs to be killed, quick time event. Some of the instant deaths that come from failing these prove to be quite annoying. It is also annoying the breaking of gameplay that results in them, especially during the intense moments fighting off hordes of zombies.

A new feature to Resident Evil 6 is the Agent Hunt mode. Players are injected into someone else’s campaign and are assigned the role of a zombie. Their mission, to kill. It’s not the best post-game content but it’s a great little time waster, even more so for those who are not infected. Human opponents are always more ruthless and with smart tactics, zombies can work together to kill the heroes of Resident Evil 6.

The best post-game content would have to be, once again, Mercenaries. Capcom has made this into a great experience, and I have easily put in the same amount of time into Mercenaries than I have the main game. Each of the characters playable in the main game are playable here, all with unlockable costumes. There are many, many maps that are inspired by locations found within the game. Capcom is offering great support for Mercenaries, with continued DLC support featuring new maps and new costumes.

Further DLC will bring more multiplayer modes to the table. Predator sees one player take control of the Ustanak, while the other five players work to take it down. Survivors is a team deathmatch mode, which sees dead players revived as zombies. Onslaught pits two players against one another in a Tetris Attack-like mode. Chain thirty zombies together, and send that many to your opponent, last man standing wins. 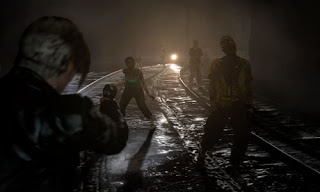 Throughout all the gameplay modes, skill points are on offer. These points are used to unlock perks that will assist you in your zombie killing aims. In the campaign you can allocated up to three skills into eight different slots. Throughout the campaigns you can switch your slots on the fly, allowing for some customisation. Want some power, increase your firearm and melee attacks. In a pinch, get some extra health from tablets and up your defense. Skills are available to all modes playable and allow for some teamwork in the co-op sections.

One of the worst aspects to this system is how skill points are turned into a pickup, alongside ammo and herbs. There are many instances in the game where ammo is hard to come by, and when you break open a crate only to find more skill points, it is very frustrating. This is more evident with the final bosses. In three of the four final bosses, I had run out of ammo thanks to crates being filled with skill points rather than ammo.

Resident Evil 6 is a mixed bag. It’s an amazing co-op game, one of the best around when played with a friend. But although it tries hard to create an amazing experience, it’s held back by holding onto the Resident Evil name, as well as some outdated gameplay mechanics. If Capcom decides to reboot the series with Resident Evil 7, I only hope that the co-op gameplay they have mastered lives on, because it deserves to survive as much as the rest of the game needs a refresh.