One of the strangest first-person combat titles in recent years gets a sequel on the PC in a game that’s equal parts brawler and first-person shooter.

Okay so first off- have you played the original Zeno Clash? If not, then you should know that Zeno Clash II places a massive amount of trust in the fact that you have indeed played through the first game and know all the characters and their world fairly well.

There is a re-cap of sorts in the form of a combat tutorial where the main character Ghat provides a voice-over and fills you in on what’s come before. He talks history as you practice the hand-to-hand moves that you’ll need to master if you want to make it very far in Zeno Clash II (ZC2). These audio snippets are accompanied by still images and give you a rough idea of the story so far. They’re by no means a full picture of everything though and I would have much rather have seen a short video re-cap or even a few in-game segments filling the player in. At times, I felt totally lost in ZC2’s bizarre world as I played- and that’s not meant in a good way. Actually, ‘bizarre’ might be an understatement now that I think about it. Developer ACE Team has created a universe in the world of Zenozoik that’s as surreal and just plain old odd as they come. Taking place in a kind of post-apocalyptic-looking realm where strange creatures are the normal inhabitants and a totalitarian ruler (the Golem) has taken over.

Bringing that world to life is one of the best parts of ZC2- the graphics. Outside of a few ho-hum indoor areas, this is one pretty game all the way through. Most of the outdoor locations are lush and colourful with a kind of ‘Saturday morning cartoon’ meets Jules Verne or Edgar Rice Burroughs vibe to them.

That’s just the locations though, and while they do make up the majority of the game, so do the ‘guys’ you battle. More on the actual fighting in a second, but I have to get in that the baddies in this game are some of the strangest I’ve seen in basically any game ever. 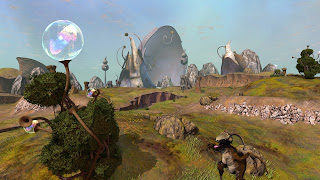 Have you ever considered punching a man-thing-with-a-beak in the jaw… uh, beak? How about shooting a dwarf with a bag on his head or tossing a ‘skull bomb’ into a crowd of Mad Max meets Planet of the Apes refugees? All that and more happens on a regular basis in the world of ZC2 and it’s all as strange as it sounds. Seriously, it took me a while to figure out whether I was supposed to be afraid of these whatevers or laughing at them (I settled on laughing).

While we’re on the subject of the A/V package, the voice work in ZC2 is really not so great and that’s being kind. Ghat is good enough I suppose, but the supporting cast is as laughable as the animal-men you knock around. Ghat’s sister (who’s not really his sister) Rimat stands out from the crowd as being especially bad and often sounds like the actress is on the very edge of falling asleep at the mic.

Situated squarely on the other side of things though is the combat. While the ranged and weapon-based fighting runs from useless to so-so on the effectiveness scale, the hand-to-hand is pretty great and loads of fun. At times. First the good- there are a number of very cool combos and moves that you can pull off in Zeno Clash II that’ll deal some serious damage to the deadly whatever’s you face in battle. 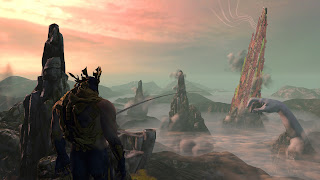 Ghat can pop off lefts, rights, uppercuts, charging blows and even some wrestling moves. All in all it’s a cool system that’s probably the best that I’ve ever played with in an FPS- not that there are all that many FPS’ with robust hand to hand combat mind you. There might just be a very good reason for that too as grappling in first-person leaves a lot to be desired. Which brings us to the ‘bad’ portion of the controls.

While the majority of the controls are decent enough, it’s easy to get lost with some of the more complex moves. Especially in the middle of a big fight where you’re constantly getting blindsided by foes, it can feel like a lost cause to even fight back, let alone try and pull off a grapple and piledriver. 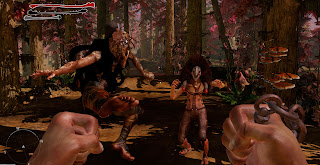 That was actually one of the bigger issues I had with Zeno Clash II. It’s way too easy, even with your more often than not moronic allies active in a fight, to get surrounded and knocked around by an enemy that you can’t even see. I lost more than a few times because of it. After a while it kind of got on the old nerves to start over at the last checkpoint for the fourth time and I started feeling like ZC2 would have made for a much better third-person title than a first-person one. I mentioned that the ranged weapons are uber-stinky right?

But I don’t want to be too harsh as all in all, Zeno Clash II isn’t a bad game, it just stumbles all over itself so often that it can be a frustrating one to play through. There’s a tonne of potential there though and maybe that’s a part of the problem. Maybe ZC2 is just too ambitious for its own good. Maybe there are just too many ‘new’ things for the first-person genre tossed in here to work smoothly and comfortably.

When it really gets humming and you get the feel for it, the punching is lots of fun in the same way that punching in general is lots of fun. There are definitely good times to be had as I can’t say enough how much fun it is to waylay a mutant and watch him get blasted back a dozen feet before moving in for a stomp.

And then, of course, I’d get knocked down as a punch to my head lands from that guy I didn’t see to my left. Back to the checkpoint for me I guess… I wonder what’s under that bag on that guy’s head?