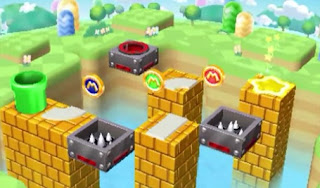 Mario Vs. Donkey Kong: Minis on the Move does not fool me. It’s a really well made $0.99 app… and that’s really the best way to put it. It’s nothing more or less. Is it worth paying ten times as much for? Well, I’m sure plenty of Nintendo fans will be able to justify it.

But this basic puzzler does not fool me. There are dozens of games like this on the app store over in Apple land, and I’ve been playing these kinds of games since back in the shareware days. It’s a compelling enough formula – that’s why it’s been around for so long in so many variations – but if this is what Nintendo is pushing off as its software I am worried about its own quality control process.

In Minis on the Move each level (which players select from a menu interface just like a mobile phone $0.99 game) involves a grid with parts of a path missing. Players will need to drop in randomly-generated bits of path into the grid to guide the minis around the level and, after having picked up three coins (another common thread with many $0.99 apps and their 3-star rating system) direct them to the exit. There’s a couple of variations here – some contain a time limit, others require players to use a specific set of tiles, and others involve multiple minis, and in fairness to the game this means there is a wealth of content. Difficulty scales nicely and getting through all the levels will really test the brain matter. 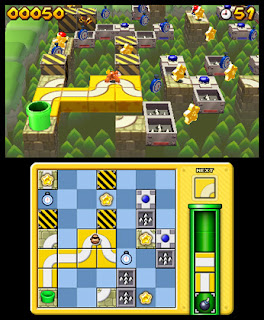 Getting a “perfect” rating on a level earns players a star. These stars unlock goodies like minigames and display toys in a virtual collection. The display toys are useless. The minigames are fun the first time you play them, but get dull quickly. I appreciate Nintendo putting in some effort here, but they will only add marginal play time to the game.

The level create mode adds more value to the package. Players can build some interesting challenges considering the limited toolset at their disposal, and then upload them to the Internet. There’s not enough to make this user-generated content endless, but there’s a solid few extra hours of fun to be gleaned from jumping online and checking out the best-rated levels, and sharing levels with the friends list is of course a lot of fun.

The game looks fairly good, though the nature of it means you’ll be spending most of your attention on the static and dull bottom screen to place the tiles down for the mini to follow. The top screen is the part that looks good but is almost entirely aesthetic and you’ll only get the chance to look at it at the start and end of each level.

Working on the assumption that you’re not thoroughly sick of this puzzle game formula and you don’t mind paying ten times as much for this game as is standard for its genre, then Minis on the Move works. It’s not spectacular, it’s not innovative and it wanders dangerously close to an example of Nintendo exploiting its fanbase and relying on branding, but it works.