Rift goes free to play, Wolfenstein continues to impress, the Avengers head into Infinity in Marvel’s next big crossover and are rhythm games are back (?) in today’s News Wrap.

Open the Rift for free next month

Rift from Trion Worlds is officially the latest MMO to go free to play. Unlike some other f2p titles, it’s actually a pretty generous amount of gaming that you’ll get for your ‘nothing’ too. Players who download the free to play edition of the massively multiplayer online game will find the entire world of Telara open to them along with the Rift store where you can pick up loads of downloadable goodies for your game.

In addition, current Rift-ites will be on the receiving end of some perks from Trion as a ‘thank you’ for actually paying for the game.

I’m a fan of Wolfenstein, have been since the granddaddy of the FPS released on the PC from iD Software many a moon ago. I even liked the many reboots of the game that have come and gone over the years – none of them sticking. This new edition of the game though, this one I’m actually excited for.

Alternate universe theory is a concept that’s extremely close to my heart and it looks like MachineGames and Bethesda are running with the idea for Wolfenstein: The New Order. The latest reboot of Wolf asks the question of what might have happened if Germany had won WWII.

Unusual for Wolf, is that it definitely looks like the game has forsaken mystical elements for hi-tech ones (though there is a unit called the ‘god of thunder’). Also- it’s looking awesome if the latest round of screenshots are anything to go by.

Check out what BJ will be blasting away at here 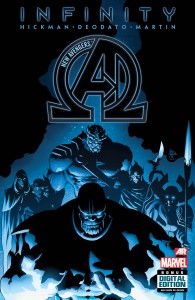 The above is the tag line for Marvel Comics’ latest massive crossover event Infinity, and it looks like a doozy. Thanos is back (shocking considering he’s the main villain in the Avengers movie sequel) and he’s assembled an all new squad of muscle to back him up on his quest to eradicate the Avengers and the Earth itself.

New Avengers #9 (releasing in August) is one of the many books crossing over into the Infinity storyline and it’s recommended reading from the publisher. Marvel has been dropping hints that Infinity will be peppered with background elements that’ll play out in the supporting comics, but that you don’t really need to read in order to keep up with the main plot.

All the same, they say this is one not to miss, find out why right here

BandFuse from Realta is the latest rhythm game coming to the gaming market and it actually looks pretty good. Yes, I know, the whole genre kind of crapped out a few years back and never really recovered- but BandFuse feels like it might be one to watch.

The game will offer a real learning experience much like 2011’s Rocksmith and will teach players how to play the bass, guitar or perform vocals while they rock out. It also offers a surprisingly deep selection of ‘rock legends’ that will be on hand to teach.