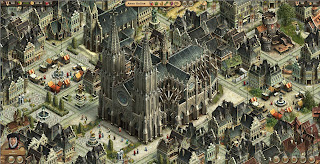 Anno Online was a pleasant surprise for me as a gamer. I’m not that familiar with the genre, and of course, bosses like to be sadisitc when handing out games to play. And, to have even more fun at my expense, this boss didn’t go into detail to what it was I was about to play and from that I couldn’t develop an expectation, but from the brief time I got to play with the game I found was that Anno Online is a fun Sim City-like game with a lot to offer.

Speaking of Sim City, the experience of that one with the servers was overbearingly underwhelming and displeased the franchise’s massive fanbase. Luckily, I feel that Anno is the best substitute for the SimCity crowd as it offers a lot in variety and keeps you coming back for more. It’s no Civilization V or even a Warcraft in terms of depth, but with it being 2013, it’s recent and recommended.

Unlike war RTS games, Anno offers a peaceful setting; think Harvest Moon instead of the intense war simulations. Unless there’s something hidden from me based on my time in the demo – this is my first time ever playing Anno – there’s actually next to stress to be found in this game. As the player, you’ll casually direct a village, gathering resources and then exploiting said resources to your advantage. Essential buildings such as marketplaces, harbours, and lumberjack mills are the keys to continue your journey and expand. 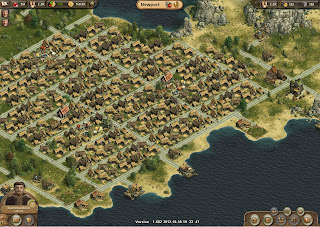 Expanding can occur in one of two ways: The most accessible way is to grow via land expansion. Doing so can take an hour of waiting or, if you have the resources, pay upfront with instant freedom (yes, it’s a Farmville-style feature, but we promise it’s not so bad in this instance). The second way to grow a little trickier and that’s by sea. I say tricky because you need to be efficient as possible and grow a healthy, large population. I never got the chance to travel by sea – I’m not sure if it’s even in the Beta – but I’m pretty much sold that it opens up an entire new door for opportunities and spices up the gameplay.

Side quests are also essential for efficiency. They’re fun, too, and can reward you with extra supplies to do whatever it is you seek fit. Sharing resources with friends and fellow players is also a nice feature to take advantage of if you’re falling behind or just feel social.

The community is also fantastic. Kind, humorous, helpful individuals that are always willing to do their best to help newcomers such as myself. Beyond the compulsive game itself this community really encouraged me to keep coming back for more. Even when the players in the chat couldn’t seem to help me, I used the official forums for help.

Anno Online was a great Beta for what should be a fantastic game. I’m not familiar with what Ubisoft has done in the past with Anno, but if the retail games are anything like the Beta, I’m heading off to grab some for those times I just want to unwind and relax with some light strategising.